486 Motherboard with PS2 connector - is it possible to get bracket for it?

It has PS2 mouse connector and COM ports built into the motherboard.

It has PS2 mouse connector and COM ports built into the motherboard.

The startech bracket seems to have 5 x 2 pin connection.

Well . . . there's not a whole lot out there for you. You may have to get creative.

The manual says that pin 6 is "reserved" so that does not need to be connected.

Unfortunately there was no hard standard for motherboard PS/2 headers, so there were several variations. As long as you get a bracket where the header plug is not molded, you can pull out the individual pin connectors and re-arrange them as needed. Use a volt meter to ensure each header pin is going to the right pin on the PS/2 plug. (see your manual about what each pin is for.)

The only other thing to look out for is that there is enough physical space to attach a x2 size header like that. Not sure why they used 5x2, all the ones I recall seeing where only one row. But there were probably even more variations that what I know of.
G

I have one that is 1x6 and a couple that are 2x4. Would you like it plain, or with a serial or parallel port? Here's a picture of how the connector is wired, if you would rather modify one than pay shipping. 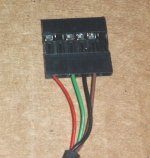 I found a web site that appears to sell the right bracket for me: http://www.hardtofindcomponents.com/images/2com-ps2.jpg

you might want to change the connector and place the wires in the right places on it. This is what i did for a bracket i got here, but had a different connector, i had to use a different connector, for example a USB connector, and just took the wires out and placed them in the correct positions on that now-PS/2 connector. Whatever connector it might have, i believe PS/2 will always have 4 wires, so...many connector holes won't be used, i bet they only tried to mess around with peoples to make them think they have to pay a crapload of cash to have THE right connector...when it's only a stupid bit of plastic. But quite frankly, you don't absolutely need it, just take the wires out and put them on the right pins.
You must log in or register to reply here.
Share:
Facebook Twitter Reddit Pinterest Tumblr WhatsApp Email Share Link
Top