Another Altair 8800 back from the dead (sort of)

Hi all, I thought I'd document the progress I'm making with my Altair.

I couldn't power it on when it arrived, because it was set-up for 120V and here in England we use 240. I didn't particularly feel like re-wiring it (especially since I don't have a 240v fan, not that I really need it), so I went the cheap and lazy route and wired a US outlet to a 110v site transformer I picked up for free.

When I first opened the machine I noticed the 64K ram board wasn't fully populated, infact it had chips missing between addresses. I went ahead and pulled all the RAM and tested it with a NeoLoch RAM tester, which failed half the chips (I don't really trust it though, because it's supposed to test 2114s too but the supplier recently said there's issues testing those chips), so I went ahead and removed those and proceeded to test the 74xx ICs on the RAM board and the CPU board, which is actually from an IMSAI. All but one chip worked, which I replaced.

I powered the machine on with no cards and checked the voltages, which appeared good, so I then went ahead and tried the RAM card, followed by the CPU card.

At that stage the system would come up, and start executing garbage. I'm not entirely sure if that's meant to happen since my Altair clone doesn't do that, but I know a stop+reset is needed anyway. I checked all the switches, and I could examine and deposit fine, so I went ahead and entered the "kill the bits" program, double checked I'd entered it correctly, examined 0 and hit run.
It didn't work, all the address lights flickered and it wrote over itself. Next I tested the socketed ICs on the front panel board, which all seemed to work except one of the 74123s that had been replaced previously. I desoldered the other 4 and tested those, and they appeared bad, so I ordered some more and some sockets, then replaced them. Strangely though, the new ICs tested bad too, but I think maybe my IC tester doesn't support it. (I can't tell because it's a no-name Chinese thing without a manual)

After that and some more wire repair, it's now in a state where it will run 'kill the bits'.

There are a few oddities I've not quite worked out yet:
-hitting reset the first time works, but doing it again will deposit 377 into address 0
-single stepping shows some differences in what's being executed compared to the clone, I'll have to have a look at the 8080 instruction set to get a better idea of what's going on
-holding reset illuminates every status light except stack, whereas my clone turns all the status lights off
Any ideas? 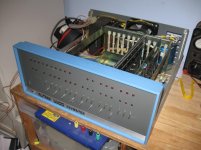 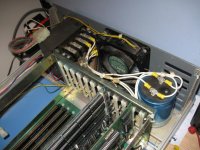 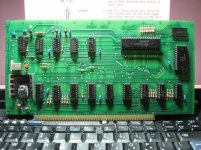 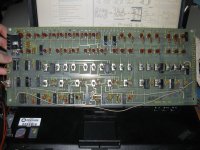 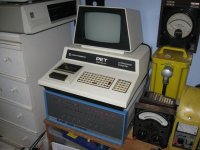 Hello Tom,
It looks like that you have a 8800-b power supply.
Also wondering why the backplate and the transformer is mirrored to what i have seen before from other 8800-b.
When it is a 8800-b transformer, you can jumper it to 240V operation.

Frank S said:
It looks like that you have a 8800-b power supply.
Also wondering why the backplate and the transformer is mirrored to what i have seen before from other 8800-b.
When it is a 8800-b transformer, you can jumper it to 240V operation.
Click to expand...

Hi Frank, I was aware of that before and made a post about it. I'm not sure if this is an 8800 with the 8800b-PS upgrade kit or an 8800b with a swapped front panel. I don't know why it's mirrored either, my best guess is the builder made an error or didn't have a long enough power cable for their desk.
I'll get around to jumpering the supply eventually.

I've left the system running for about 4 hours and it's stable so far. That issue I was having with the reset setting the first byte of RAM all high is now intermittent, and doesn't always set every bit high, it appears more random. Could be another bad connection.
C

Seeing your pictures now we can see a bunch of things that aren't original regardless of which model. The motherboard and that cage don't appear to be MITS and it doesn't look like the CPU or any of the cards are.

I also don't think it's an A model or early Altair. The chassis holes are in the wrong place. I don't own a B so I can't tell you about them.

The back plate is inside out so left is right and right is left. The power supply looks like an 8800b version but the bottom plate is spun 180 degrees so the holes line up with the fan (the power supply is on the wrong side, as is the cap). The CPU card is an IMSAI and the memory isn't Mits either. The card cage and motherboard are definitely not Mits. The 8800b doesn't have a cage but it does have blue "pillars" to hold the cards in like the original 8800.

I'm not sure what the Mits power supply upgrade contained, exactly, but if it looks like an 8800b power supply, than this is upgraded.

Corey986 said:
Seeing your pictures now we can see a bunch of things that aren't original regardless of which model. The motherboard and that cage don't appear to be MITS and it doesn't look like the CPU or any of the cards are.

I also don't think it's an A model or early Altair. The chassis holes are in the wrong place. I don't own a B so I can't tell you about them.

I noticed all of that before. What do you mean about the chassis holes though? Do you just mean the rear panel? I believe the support rails may have been moved for the new card cage, it's certainly not designed for the case.
C

I think Snuci explained it. Seems like it was a B back panel flipped around. I should have said back panel cutout not chassis holes in my post. Teaches me to be clearer when multitasking. I was BBQ'ing while posting.

I managed to get a closer look at the card cage/motherboard, which is from "QT Computer Systems", this one is dated 5/12/82 so it's obviously a fairly late addition.

I was curious to see if the PSU and rear panel were originally installed like this, so I removed the panel and looked for sticker gunk from the serial number on the other side, of which I didn't see any.

If you look at the picture you'll see a bare patch where the bridge rectifier is mounted. This is only on the one side and appears to have been masked off during painting rather than sanded. Does anyone know if the B panels originally had this? If so I guess it's a factory error and the builder worked with it.

Edit: Going by photos of other 8800bs and turnkeys, the bumped portion of the screw holes for the top cover are on the opposite side to this. 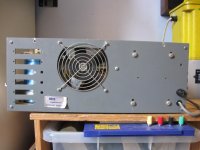 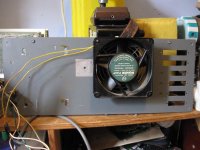 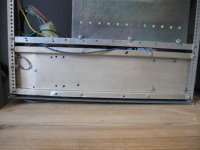