I have a IIc monochrome monitor and it has a slow (about 2 or 3 seconds) horizontal wave that moves vertically down the screen. My first thought was to recap the monitor, so I ordered the caps and did the job. I replaced all the caps with the same farad rating, equal or higher voltage rating, and all are 105 degrees vs 85 degrees of the original caps. I powered up the monitor tonight and sadly it still has the slow horizontal wave, but even worse after about 30 seconds of operation C514 (100uf 50v) blew.

The monitor still displayed an image until I powered it off (a few seconds of fumbling to hit the power switch while my brain registered what just happened). I checked the cap's orientation against the circuit board, as well as a photo I took prior to removing the original caps. I did not install it backwards. I took the cap out and went to measure the voltage across the pads where the cap would be installed, but now the monitor does not power up at all (even though it was still showing a picture before I shut it off previously).

I should know better than to recap a monitor without knowing how to readjust the power supply circuits afterwards, but I was hoping it would just be fine... I did find the SAMS schematics online and I will start troubleshooting from that, but in the mean time does anyone have any suggestions or known "gotchas" about this monitor?
R

I doubt you will get sufficient HV out of the monitor with C514 removed. Did the original C514 have polarized markings on it (+ and -) ? I'm suspicious of the polarity on it looking at the schematic. I see C513 is obviously drawn backwards polarity too. Most of the energy in the primary of T502 is in the negative direction. I would recommend trying to find maybe 100uf 50v (or better yet 100v) NP (non-polarized) capacitor for C514. Since the unit had same symptoms before and after replacement, the cap blew probably because of polarity or voltage rating. The ripple in the video is most likely from the AC power supply area (the supplies feeding off the line transformer T2). I have one of these that the brightness control is frozen so I will be opening up mine and can look at C514 markings also.

I was pretty careful about the cap polarity (or lack of polarity in some cases), and making sure the silk screen actually matched the actual cap polarity. Here is a photo of the area with C514 prior to replacement (C514 has the white glue on top of it): 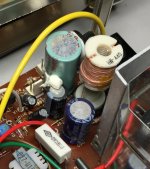 I'll check the power supply area when I get home.
R

I think yours is in backwards !! Look at my photo. C514 white negative band is pointing towards the coil and yours is pointing away. This is weird since it worked all these years so not sure what to think 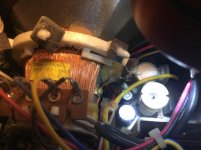 That is crazy, since my photo is of the original caps before I started replacing them. It is not a bipolar cap either, and certainly has the negative stripe. I found that fuse F701 had blown, probably when the C514 popped. Replacing that, but leaving C514 out, and the monitor powers up and I can take some voltage readings.

The first problem is that the 12V regulator will not achieve 12V. 11.5V is the best I can get. I checked the input from the main rectifier, and without a load (F701 out of the circuit) it produces 24V, but with the fuse in and the monitor as a load, the input to the regulator section is pulled down to 14.3V instead of the 18.8V that the datasheet indicates. I'm not sure if the problem is the regulator or something else in the monitor.

I pulled all the diodes from the rectifier and checked them, they are fine. I also tested the secondary of T2 while I had the diodes out and it was good.

Finally I tested the voltage across the pads where C514 goes, and surprise, with the meter probes on the + and - pads as the cap would be installed, I read -16V... That explains the cap blowing up. I don't know how the original cap was not blown... I'm going to throw the scope on there next and see if the signal stays on one side of ground. Retrogear, any chance you can take a measurement across C514 or check the markings on the bottom of the PCB? My board has + symbols on most of the caps, and the + is definitely on the side closest to the coil.

I also still don't know what is causing the horizontal wave, but until I can get the regulator to the proper 12V, I can't be sure of anything.
M

Also, does anyone know the part number for the flyback transformer in this monitor? I get nothing when I use the number in the SAMS datasheet.
M

I also had a very bad horizontal wave on mine, but it ended up being the RCA cable I was using.

Yeah, I found that thread and looked for the FB, no luck. The video cable I am using is the one that came with the IIc monitor, and the source is an Apple IIc. But I still don't understand how the monitor worked at all with that original cap. I'm going to put another C514 in according to the voltage I see, and hopefully that will just fix it all. Without C514, maybe the FB is floating, because I'm seeing really high voltages. In some places I am seeing double the voltage off of the FB, according to the SAMS datasheet.

matthew180 said:
Yeah, I found that thread and looked for the FB, no luck. The video cable I am using is the one that came with the IIc monitor, and the source is an Apple IIc.
Click to expand...

My IIc monitor combo displayed the same waviness, also with the original cable and I also replaced some caps and the bridge rectifier to no avail. Until I replaced the cable with a quality coaxial cable, then all was good...

Wow, I really hope the problem is not just a bad cable. That would mean the whole "re-cap" was unnecessary and now I have a non-working monitor.

check D17,D18 to pin 7 of the flyback. It should be clamping the + part of the waveform on pin 7 to ground. Make sure your scope ground is on the correct ground
M

Ok, tested D17 and D18 in-circuit and they seemed ok, although I should probably remove them just to be sure. However, the signal on pin 7 of the flyback was definitely being clamped on the positive swing of the signal. Using the same ground reference (cathode side of D17,D18) I checked flyback pin 5 again, and the signal is still going positive and negative with a peak to peak of about 400V.

You could try using two 220 uF caps back to back and connect that combo to pin 5 then measure the voltage across pin 7 to ground.

If I read the circuit correctly I would think the polarity of C514 is drawn wrong since pin 7 is positively rectified to ground by D17 and D18 meaning pin 5 would be negative. If however one of the diodes shorts out (maybe under higher voltage) C514 would try to 'shunt' all of the (AC) output to ground and probably pop.
S

Hello. I stumbled on this thread from a web search after a recap of my own Monitor IIc wound up blowing C514.

I wanted to report that on my specimen the silkscreen for C514 on the board is evidently backward: in fact, it's the opposite of what's seen in the pictures here. (There are a few other differences in that board as well. My monitor appears to be from 1984, and the one on that webpage from 1986. That said, the circuit involving C514 appears to be quite similar.)

I replaced my blown C514 with another new part, oriented opposite to the way directed by the silkscreen, and the monitor appears to work now. I still have the horizontal ripple that the original poster observed, but I'm hopeful that a replacement cable will fix the problem.
You must log in or register to reply here.
Share:
Facebook Twitter Reddit Pinterest Tumblr WhatsApp Email Share Link
Top