After years of searching (I joined this board when I started!) I've finally found the machine I used when I was a kid: the 'AT&T 6386/SX WGS', presumably an Olivetti-rebrand by AT&T as they were doing at the time.

I bought this machine off of eBay and it's in fairly decent condition. Paint on the case is a bit chipped and stained, but it's what you'd expect from a late 80's computer. Much to my surprise it has a standard PS/2 port for the keyboard and mouse and on-board video.

However, I cannot get the on-board VGA to display color! There are no jumpers on the motherboard to control color that I've found (just one to enable/disable onboard video), CMOS appears to be set for EGA/VGA color, and AT&T's customer disk has a VGAMODE program that lets you switch to MDA, Hercules, CGA, and VGA (Mono and Color). Everything is set for color VGA, but the system insists on displaying monochrome VGA. I've also used MS-DOS 6.22's MODE command to switch video modes that way, but nothing different. Probably the same thing the VGAMODE software is doing anyway. The onboard video describes itself as an 'Eagle II VGA' BIOS and it displays a pretty lengthy message prior to POST, but I've not been able to get a picture due to it flashing by so quickly. I've confirmed the graphics mode selections work: 'Wizardry I' happily uses Hercules, CGA, and VGA, but all monochrome. I know the Eagle II was sold as a standalone ISA card, 8-bit I think, but my problem seems unique to AT&T's implementation here. I'm also wondering if the problem is simply my monitor, but it works fine with other systems. I've ordered a cheap Trident VGA ISA card, so I'll be able to play around with that once it arrives next week.

It's a bit of a long shot, but I'm hoping someone might have some experience either with this system or its integrated video to help point me in the right direction. The guy I bought the system from took pictures of it running on a cheap LCD monitor, with color, so I'm not sure what's going on here.
R

I managed to get a quick snapshot of the pre-POST message. Turns out it is my monitor, sort of.

The 'Eagle II VGA' can't determine what my Samsung SyncMaster actually is, so it's defaulting to monochrome mode. Forcing this to VGA color wound up displaying the Windows 3.1 splash screen in color, but then Windows refuses to load any further. So I either rely on the Trident video card, which hasn't arrived, or find an older CRT that the VGA BIOS will be able to "talk" with.

Mystery kind of solved I guess. 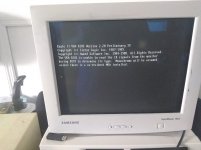 Early vga had 4 pins grounded or not connected identifying the type of monitor. Info at https://allpinouts.org/pinouts/connectors/computer_video/vga-15-pin/
Maybe ground pin 11?
E

You can build a small adapter (VGA male to female),
which sets pins 4 and 11 to ground, and breaks connection to pin 12.
Or you can do the same in the VGA cable.
R

Thanks, I didn't know about the switch from analog pin-based signals to digital ones.

I found an old monitor on eBay that should pre-date DDC (seems the standard was published in 96 or so), so we'll see what happens with it. Unfortunately my soldering skills are not likely enough to create a workable DDC-to-Analog video adapter, otherwise I'd use the SyncMaster with this system and get a cheap Dell LCD for the Win2K machine.
S