I recently acquired a fully-working 7300 from a friend. The catch was, he would need to keep the hard drive (an ST-251) since it was his only working MFM drive. No problem, I thought. Another friend of mine has a few half-height MFM drives, so I could use one of those. 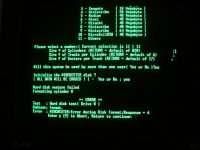 No luck with any configuration options. The error message comes back right away, without delay.

I can't seem to find a manual online regarding possible error messages from the 7300.

It may be possible that I have three bad drives, but they all spin up and sound good.

One extremely obvious thing to check (and I apologize in advance because you've probably done this 20 times already): Make sure the cables aren't on backward, if your cables aren't keyed. But, if it's not that...

I have formatted an ST-225 on my 7300, so I know for a fact they absolutely can and do work. However, I was seeing this exact problem (I think it was Error 4) on an ST-138. It turns out the ST-138 had a stiction failure, one of the heads was torn clean off (!!!), which I discovered when I turned the drive over and heard a rattle. Believe it or not, since the torn-off head was head #6, I was able to format the ST-138 by telling the 7300 it only had 5 heads. (Later, I opened up the drive to retrieve the head. I wouldn't trust that drive to hold any real data, but it was a fun experiment, anyway.)

I do not know for sure, but I have a hunch that the error number is the value of the Error Register of the WD1010, the hard disk controller in the 7300. This is documented in the WD1010 datasheet. Bit 2 is Aborted Command: "This bit is set if a command was issued while the DRDY is de-asserted or the WF is asserted. The aborted command bit will also be set if an undefined command code is written into the command register, but an implied seek will be executed." So it may be that Write Fault is being set during the format, but of course the cause remains unknown.

If you want to be adventurous, you can try some different drive parameters to see if it helps. Try telling the ST-251 that it only had 5 heads instead of 6, for example, see if that makes a difference.

On top of checking the cables are both on correctly, also check the drive selects - if it's a straight through control cable you'll probably need to set the drive to DS0 (where most MFM drives pulled from IBM clones will be set to DS1).

SpidersWeb said:
On top of checking the cables are both on correctly, also check the drive selects ...
Click to expand...

Oh, that is a very good point. I hadn't even thought of that. And that would certainly explain an Error 4 if my reading is correct (command issued while DRDY is not asserted).

SpidersWeb said:
On top of checking the cables are both on correctly, also check the drive selects - if it's a straight through control cable you'll probably need to set the drive to DS0 (where most MFM drives pulled from IBM clones will be set to DS1).
Click to expand...

I bet you this is it. These all very likely came out of PCs. I'm unfortunately (fortunately?) going on vacation tomorrow, so I'll have to check on all of this when I get back. I was tempted to bring it along, but I'm afraid it wouldn't fit in the overhead compartment...

The cable was plugged in the same way as the ST-251 that came out of it, so if it's not bad drives, then that's got to be it.

I tried configuring the drives as 612 cylinders, 2 heads, and 17 sectors per track, but still no luck.

I'll make a report when I get back in town!

Also double check that the terminator is installed.

I'm back from a nice vacation, and have good news to report! It was in fact the jumper setting. I moved the jumper on the CDC 94205-051 one to the left, and what do you know, it has successfully formatted all 989 cylinders. I'm waiting for it to do a surface test right now, so here's hoping it doesn't find too many bad spots.

Thanks all for the suggestions! Can't wait to have this system reinitialized.

I tried reassembling the computer and found that it really didn't fit together well with the CDC 94205-051. It really wants a Seagate drive, as the power receptacle is intended to be vertical if you want to use the metal shield, and a continuation of the shielding inside blocks the horizontally oriented Molex connector (just barely) when reassembling it. So, FYI if you're thinking about a replacement drive.

Right now, I'm in the process of formatting and scanning an ST-225, which fits much better, but unfortunately has many more bad blocks (and continues to find more after a second surface scan). I also found that the wires for the Molex connector can get routed the wrong way, causing possible insulation damage. Ensure that these wires are routed around where the black tape is to prevent any damage. They should be free to slide in and out of their spot there without any binding from metal squishing them.

After 10 passes on the first scan, the bad block table contains 21 entries. More errors kept popping up after consecutive passes. The CDC Wren II held up much better in the scanning process.

I've also unsoldered the old coin cell battery and replaced it with a battery holder. It's looking pretty good.

The 7300 is really built like a tank. I tore it down pretty far to clean out the dust, replace the battery, and just give it a thorough examination. I was impressed to see how many screws hold it together! Certainly not a cheaply-built computer. Even the plastic components feel tough.

Check out some of the pictures here.