Last year, I bought a ready-made SIO2SD interface but so far didn't get to manufacture a suitable cable. I did tonight, and decided to post a short review (preview perhaps) as I promised Nathan Allan before.

The interface does exactly what the name suggests. It connects a SD card reader to the SIO port on an Atari 8-bit computer. The SIO port otherwise is used for e.g. floppy drives and tape recorders.

1. The assembly
While the interface itself is (only?) available ready-made, you have to make your own cable. Finding SIO connectors is hard enough as it is. A few retailers in the USA claim they have a supply, but at least one I tried to put an order with regretted that they no longer supplied this connector but were more than willing to expediate the rest of my order, about 1/10 of the total order value. I cancelled the order in pure disgust, but that's another story.

Anyway, I did what any sensible person would do. I cut apart a regular SIO cable. While not being exactly common, they can still be had on eBay for reasonable amounts. I got an extra for free with a 1010 tape recorder. If you cut one cable, you get two connectors e.g. for another project or possibly to sell.

The SIO2SD interface comes with a colourful manual .. in Polish! :shock: It also has slightly less picturesque assembly instructions in English. There is a description how the cable should be wired, but unfortunately the manufacturer forgot to include a pinout graphic of the SIO connector. A bit of research revealed some pages on the Internet which describe the pinout - but from the computer side, not cable side! It means you have to mirror the pinout unless you want to mix e.g +5V with GND.

I found one page in particular which is for the related/competing interface SIO2PC: http://www.atarimax.com/sio2pc/documentation/usbchapter2.html
What's good with this page is that it lists six kinds of SIO cables and the colouring scheme used. Please use a multimeter to verify each signal, but also compare to the colouring schemes for possible mirroring issues.

The SIO2SD manual suggests putting a BAT85 diode on one of the pins. Fortunately a friend of mine who was at my place had a bag of those so I could grab one. It is unclear if this extra diode is required - only in case of daisy chaining with a disk drive and it may depend on hardware revision of the SIO2SD board - but I installed one anyway. The actual soldering of wires to the pins and insert into the connector was rather quick once all the small details were sorted out.

2. The configuration
You need a MMC/SD card obviously. It has to be formatted as either FAT12, FAT16 or FAT32. Neither the manual or homepage say how large memory cards you can use. So far I only tried with a 16 MB one, but I suppose larger cards will work.

The memory card needs to have one folder named ATARI where all the files will be kept. It is recommended to never store more than about 100 files in each directory.

Upon booting the Atari (I used an 800XL, but it should work on any model) without any memory card installed, one gets to the boot menu system. It is important to point out that unless you change the settings, this boot menu only appears without a card inserted. By holding down SIO2SD button named F4 (there are no F-keys on the Atari computer keyboard) at boot, you get to change this and some other settings.

Basically, you put disk images (ATR) and other executable files (COM etc) directly on the memory card. They eventually show up in the boot menu, and you get to pick up to eight images at the same time to load onto equally many virtual floppy disks. The file name of every image is also displayed in the LED window, as much as it has room for. The small push buttons can also be used to navigate among files on the card and select which one(s) to mount.

3. Usage
Once you have choosen which image(s) to load, you can reboot the computer and the image on the current floppy drive (I presume) will boot. I have rather limited experience of Atari 8-bit computers, but I find it a bit finicky to get an image to boot. Pressing the RESET button only gets me back to Basic it seems, and power cycling can not be made too quickly to make everything forget its previous state. Perhaps there is some magic button I should press so I while playing one game I can change to another disk image, press RESET and off it goes.

Other than that, it works fine. The interface comes with a DVD full of .. ehrm.. backups. Both games, utility programs and demos. I can't say if it contains everything there is, and many games are represented twice or more times in various versions so counting the number of unique software titles it is less than it first looks like.

4. Appearance
The bare board is neat, but those small push buttons could be tiresome to press. A handy person can solder in wires for his own buttons, and mount the interface in a nicer looking case, or perhaps install into an Atari computer. I've seen someone who already did this. For now, the bare board is fine with me though.

Summary and verdict
It is a cool product, and it seems to work well. For anyone who already owns a SIO2PC cable, it may not be your primary purchase if you're satisfied with using 5.25" floppy disks. The retro computing world is more and more going towards memory cards though: Compact Flash (CF) and Secure Digital (SD) in particular. I love the approach of simple software transfer, but it is always a matter how well these interfaces can emulate the real deal.

The fact that the manual lacks a pinout is perhaps a erronous shortcoming, and the system is documented well enough to make it possible to find and confirm how the cable should be wired.

We were four people who ordered these interfaces at the same time. Including combined shipping, we paid about $55-60 each if I recall correctly. That is excluding the SIO cable you need to hack. Buying only one interface or from an overseas reseller may put you in another price range. For someone who rarely or never uses his Atari, or is a strong believer in floppy disks and in particular original software, this interface only would have novelty value. For someone who likes to download both old and newer releases, or develops his own games, demos or utilities, I suppose it may come very handy for that final round of testing on the real iron.

If you have any particular questions or want to know about compatibility in specific cases, don't hesitate to ask me and I can check.

Oops.. this was no "short" review. It rather was a long one. I also forgot to spice it up with a picture, so here it comes. By the way, spot the errors! 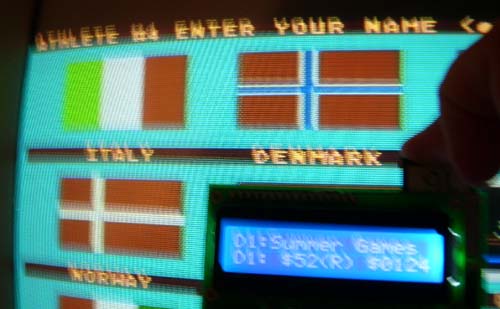 I'm quite interested in these devices, as I see them as being a long term solution to vintage computers accessing software, as disk drives wear out.

I gotta say though, nothing beats the full vintage experience of using floppies though. Shuffling through them for the program you want though. Posting it through the slot, latching it down. Hearing the disk spin (schuff...schuff...schuff). Waiting (sometimes for ages).

Hybrids (computer + memory card devices for I/O) certainly have their place though. I'd love to get one for my System 80/Video Genie.
N

That's a very good review, thanks! It sounds like it's a lot easier to use than the ST's SatanDisk SD card reader.

I didn't know you needed a cable, I would have gladly provided had I known (or remembered, I forget which). The more exposure I get to Vista, the more I appreciate the 800XL, and keeping it up to date. Using the new orfice, the more I wanna revert totally back to Atari Writer.

Having limited space and cracked containers, floppies are a rare treat for me, so I prefer using the memory cards when I get really in-depth tinkering and using. Less shuffling.

I don't have any experience of SatanDisk, but some of my friends do. I heard it was a bit difficult to configure, but once set up I think it should work right away?

What I'm not aware of is how common custom formatted Atari disks are, odd formats that rely on partitial ROM calls and such, and to what extent an interface like this would be able to handle them. I know there are at least a handful different flash or memory card solutions on the Commodore 64-ish scene, and most struggle with those few really custom loaders, which on the other hand should only be a very small fragment of the total available software.
You must log in or register to reply here.
Share:
Facebook Twitter Reddit Pinterest Tumblr WhatsApp Email Share Link
Top