Hello, I've come into possession of a NEC PowerMateSX. Pretty much a dumpster rescue. Unfortunately the machine has been stripped of all it's cards so I'm looking around at the available video cards on ebay etc. I used to work on these types of machines back in the day, but it's been awhile, would you say any old ISA video card would do? Or is there some NEC voodoo to be wary of? Thanks for your help.

I think that this is the motherboard:

And here is the jumper manual:

So, you should be able to use any ISA video card, MDA, Hercules, CGA, EGA, VGA, or other.

Thanks Alex! Much appreciated.

I've got a Powermate 1 in a similar form factor, but it's a 286. It had some generic EGA card in it and I put a VGA card in it because I wanted to do troubleshooting with an LCD instead of lugging around a big CRT. It worked fine.

My concern for you would be that it looks like it requires a RAM board that isn't in that system, based on the second link that Alex posted, and also the weird first slot. I'd expect a 386SX to use a 16bit memory card though, just like a 286, so maybe the RAM board isn't proprietary? Sometimes 386DX machines used special 32 bit memory cards. Can you tell if any of the chips on the motherboard are RAM?

jafir you raise a great point. I've been reading over the other PowerMate threads on the forum and it never occurred to me that the RAM isn't on the motherboard, and this daughterboard didn't come with my system! My "spidey-senses" kept going off about ram, but I didn't piece that together until you said so.

With that being said, I guess I'll keep my eye out for a memory card. I forgot to mention in my original post above that it did come with a WD1006-WAH 16-Bit ISA Storage Controller Card, so at least it has that going for it

Now I'm not so sure, because I do see something that looks like ram on the mobo (upper right-hand corner): 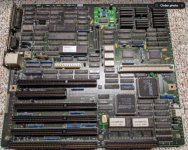 And here's the daughtercard: 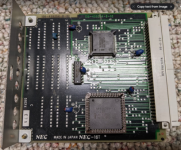 VeryVon said:
And here's the daughtercard:
Click to expand...

So is that the CPU on the daughtercard?

T-R-A said:
So is that the CPU on the daughtercard?
Click to expand...

Likely any "generic' EGA/VGA would work, at least to see if it would boot. But given that it was a salvage machine, I'd have a good check of the P/S before I'd even try that. Then check out that nothing is an issue on the MoBo. All you need to boot is (working) RAM and a way to output data (video). I'd suspect even then it's gonna complain about something... likely CMOS configuration and dead battery.
Last edited: Oct 29, 2021

After looking around, I found this (which I strongly suggest you watch):

A couple take-aways from the video: This video helps me set expectations for this machine. It also had me wondering about availability of source code and "open" versions of thing like DOS CDROM drivers that would give more debugging information when things don't work like the issue in the video, because I see in the unix/linux world how people roll up their sleeves looking at hexdumps and create scripts or driver modifications around low-level issues when bit streams don't sync up. I'm certainly not talented enough to do such things, but I wonder if those options are available for situations like in the video (I'll have to google the "open source" thing in regards to vintage pc / dos.)

VeryVon said:
NEC machines of this type were non-standard / proprietary (this is a pretty big generalization tho', a real NEC expert would have to weigh in on that)
Click to expand...

Indeed. Had a SX20 Powermate for just a few months. Didn't really get to know much about it since the (underrated) P/S blew so quickly.

T-R-A said:
After looking around, I found this (which I strongly suggest you watch):