This wasn't even supposed to happen. I'm certainly not a collector nor do I want to start now but obtaining and using some older Apple products from the mid-90s has proven to be not only incredibly satisfying but impressively affordable in quenching some retro thirst. Like literally, mind blowingly cheap in the grand scheme of all things retro when it comes to computers around this time period.

But... there's a reason I never owned any of this in 95/96/97 and not because any of it was bad. Looking at the MSRP of any of these products from a Mac User magazine is the tell-tale sign as to why (since I, as a teenager at the time), simply would not only be unable to afford or access any of these great technological marvels upon their release, was not part of a wealthy family or network of anyone who actually did own these crazy cool computers and accessories. These were the computers of movies and magazines for me, sad as it may be.

I didn't know it then, either though. That they were lust worthy. As a broke kid, you tend to turn a head and look at only the truly obtainable. No bother wasting drool on something only the rich can afford... (pay no attention to that Lamborghini Countach poster on the wall, it's only there because of the cool glowing blacklight felt! ;-) ) 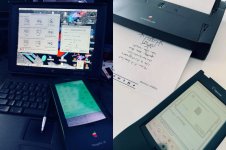 Which may be part of the luring aspect in all of this. Now that I get to play with it all for less than a fiver, I'm loving it all and how ridiculously cool it all is, every single bit of it.

I only ever remember hearing bad things about Apple's Newton (and surely some of it is indeed true and warranted) but there is definitely some charm to using the MessagePad 130. Not that I would even want to as a kid or teenager, surely. After the few QuickTake cameras arrived, StyleWriter 2200 printer (which surprisingly prints amazingly well for a 1995 printer) and the PowerBook 1400c, I thought I was done. I was almost certain my quest to complete our bare and empty foyer with a cool retro computer setup for whatever purpose had been fulfilled.

Then I stumbled upon and watched the recent documentary about General Magic:

This of course sent me a little further down a rabbit hole of curiosity regarding the Apple Newton... or, MessagePads. Tons of research later (you would think I'm spending upwards of $1,000 on one of these devices) I felt the MessagePad 130 was time era appropriate and matched the 1400c and StyleWriter 2200 perfectly, so I set out to get one. (Never mind the fact that it also had an EL backlight, a much desired feature knowing if I were to be using it, it would most certainly be late at night) As such, it was a must have to complete my Digital Retro 90s Mobile Office.

As luck would have it, turns out MessagePads aren't exactly in high demand and go for very little but the few that did go for incredibly cheap on eBay had passed me by short of a few weeks. Mint ones on eBay going for just under $100? insane. So I set out to find one and thankfully a member of the Vintage Mac community sold me one from his personal collection for a buck two five shipped and insured. Still has the sticker on the top cover case and included an official memory card to boot. Too cool! 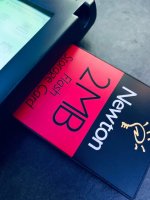 Only a few days in with it and the shock/awe factor of how incredibly impressive this bit of tech remains to be forefront in my mind every waking day. I'm sure the novelty will wear off soon, as with all of this that I'm currently deep diving down into like a mad rabbit actually bouncing around inside a magician's black hat, but none of it's going anywhere anytime soon. It's here to stay and I'm enjoying this time experimenting and experiencing the dark side of the moon, the pre-Jobs return era. Then I found this documentary, which is highly recommended if you're into the Apple and/or Newton stuff (in which case, you'll most likely have already seen) but if not:


This has all been leading up to something bigger and throughout the process has once again sparked my imagination, creativity, love for retro computing and curiosity of 90s era Apple technology all-around, slightly pre-Jobs and then up into. Oh, and about that 3400c? I realized that after I got the 1400c, the RocketBook or 3400c was the Laptop I really wanted, despite the 1400c being all-around proper or appropriate.