I had a regulator fail a couple days ago, installed a spare to get things working, and now I need to repair the failed unit. The problem is that the documentation set has a good manual for service and theory of operation, but has no drawings for this regulator. We have drawings for every other regulator in the system, but not this one. If anyone out there has a drawing squirreled away or a link they're willing to share, I would sure appreciate it. Of course if you have an h785 sitting around, I'm sure we can work out a deal.

The regulator is an H785. The 15VDC output would not adjust over about 14V so it should be an easy fix. It's labeled as a 'batt back-up regulator' and is the same size and shape as its more common brothers, the h744/h745. It's part of an H765 Power System (regulator #4 if you're curious). Our system uses 5 PDP-11/55 computers that connect to a block of shared memory. The shared memory is mounted in a BA11-K mounting box, and the H765 is the power system for the BA11. The H785 regulator has the typical 8-pin in-line connector used by the PDP regulators, but also has a ribbon cable that connects to the panel and a 2-pin molex that connects to provide the AC-LO and DC-LO signals.

At one point in its life this BA11 was connected to a battery back-up, but the battery back-up has long since been removed. Other drawing sets I've found for the H765 show an h754 in regulator slot #4. The h785 is apparently installed as part of the battery back-up so it's a rather unique configuration. I assumed it would be similar to one of the other regulators, but it's built with three circuit cards and even the layout is not even close. A set of drawings would be so sweet.

Thanks for any help. 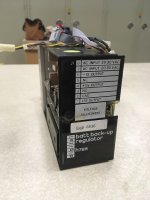 And this is why I love this forum. There are always threads worth following, and there's always going to be someone with the answers.