Period correct monitor for ][ and ][+

I always felt the Sanyo security monitors and the Amdek Color I,II,III displays were the quintessential pieces of the era.

I also felt that any of these monitors were too heavy for the //e, and to a lesser extent the II+. I always put both my disks next to each other, and the monitor off to the side or on it's own shelf.

A Sup'R'mod + a period TV set is also correct. IMHO. Almost any would do. Whatever looks and feels right.

Posted in another thread too, but I figured I would update this one too.
Here's a quick photo of what will be my ][ setup. NOTE these are all filthy and untested still, all need good cleaning, and will then get a proper photo shoot at a later date. 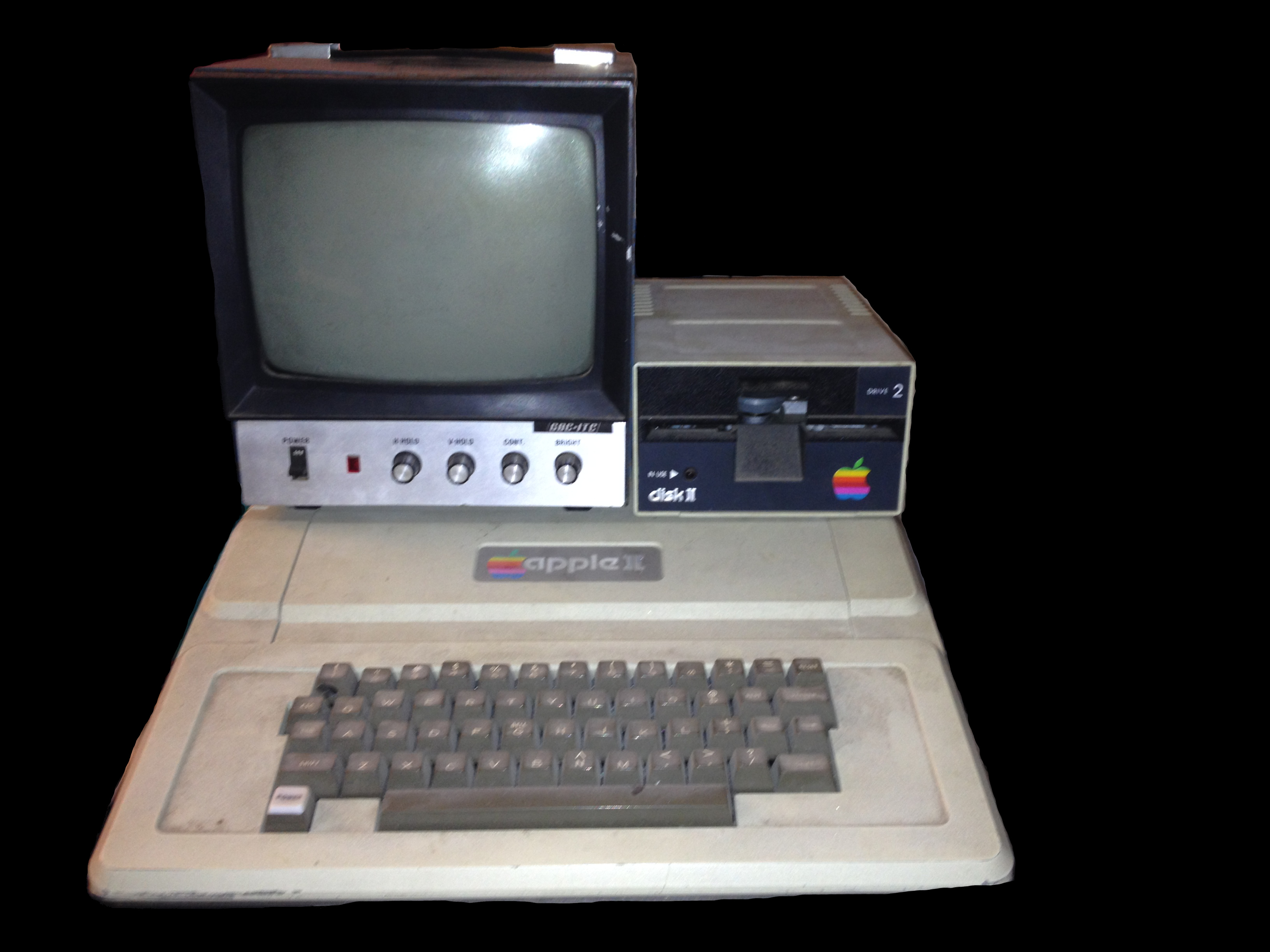 No offence but security monitors may look "quintessential" but they're not. Monochrome was not the preferred way to go either. The tape that came with the original Apple II had a hi-res demo for color displays. The Apple II color capabilities were designed to work with a RF adapter and a slightly out of phase color TV set. Everyone got the Sup-R-Mod back then, you had to buy separately only for legal reasons, Apple intended to sell an RF adapter with its system but was blocked in the FCC in the US from doing so. Do the research if you want more details on how that worked and what Woz was going to for specifically.

Also...people were much poorer cash-wise in the 70's and they would have used any color tv that they could find, including the big honker console in the living room. There were no disk drives originally either, so finding a TV that fits to the side to leave space for disk drives is not what most people would have done given they had cassette storage-driven systems.

Don't buy into the Internet self-reinforcing hype of what actually was being used from 1977-1979. Things were much much more roll your own back then. I feel that people who attempt to put 70's computers and how they were used into modern day terms are misguided. There was a lot more small business computing going on that you might think. It was not all games - if you wanted a games system you would not have spent a premium for an Apple II.

How about the first Byte ad in June 1977 for the Apple II...what monitor is that? Looks like a white General Electric portable color TV.

I know many Apple enthusiasts are very picky about these things. Don't mean to offend, and as always I am open to others' opinions. You just got mine.

billdeg said:
No offence but security monitors may look "quintessential" but they're not.
Click to expand...

Then why did Apple use them in so many of their publicity photos for the II / II Plus? you can't deny that these plus' have mono monitors. I suppose I should say I am talking about original Apple ]['s and "real world" not the ad agency photos. But there are no absolutes. Really, it's whatever you want to use, there is no "must have" other than perhaps strive for monitor to match the approx date of the computer itself.

billdeg said:
you can't deny that these plus' have mono monitors. I suppose I should say I am talking about original Apple ]['s and "real world" not the ad agency photos. But there are no absolutes. Really, it's whatever you want to use, there is no "must have" other than perhaps strive for monitor to match the approx date of the computer itself.
Click to expand...

Maybe in 1977-1979 it was popular for people to connect the Apple II to an RF modulator and color TV set, but by the time the lower-priced Commodore VIC-20, Atari 400/800, and TRS-80 Color Computer came out, not many people were buying Apple IIs for home use -- at least not until the IIc came out in 1984.

There is a lot of revisionist history saying that the Apple II was a huge success as a home computer, but it actually wasn't; it was too expensive to reach that market, so instead it was mostly sold to schools, small businesses, and hobbyists -- most of whom used monochrome monitors. Commodore, Atari, and Radio Shack sold millions more computers than Apple did, but Apple had better marketing, and they took quite a bit of creative liberty with the facts in their ads (such as Apple claiming that they "invented the personal computer").

When I got my A2 in late 1981 I used a color TV for a monitor. Later I bought a 9 inch monochrome monitor that was built for security systems. Most of my friends got A2's to. A few I knew got C64's. It may have been expensive but one look at the number of entertainment titles to see what people were buying A2's for.

Most of my friends transitioned to clone PC's in the mid 80's. Most of us wouldn't even consider a toy machine like a C64 or Sinclair. The A2 was a great compromise between a home and business machine (It was the first to have spreadsheet software).
C

Guess I should chime in here. BillDeg is right in the early days (1977-1980) people just used their existing colour TV. In some rare cases they may have bought a TV for the computer (an excuse for a 2nd color TV), but there wasn't really a need or the knowledge that a dedicated monochrome monitor would hold up better for text based operations like a spreadsheet or word processor as those didn't really exist yet on the "home computers".

Yes both Bill and I use portable "colour TVs" with our apple II. In the case of it being a 2nd tv in the house back then odds are it would have been a smaller portable that could be moved around the house and that would have most likely been the one used as opposed to the giant piece of furniture called a living room TV set would have quickly been "annexed" by the computer user and that may have prompted the purchase of the 2nd TV just so mom could watch General Hospital which for some reason was on just when the kids got home from school LOL...

Anyway... Bill has gone with an awesome 1968/1970ish colour TV with the idea it was already existing and I have gone with a 1976/77 colour TV with the attitude that if you spent so much on a computer you might spend a little more on a tv. Both are valid depending on your economic situation back then. It was a very bad recession in the late 70's and if you had a job you were doing ok other than the very high inflation and energy costs, but people back then were savers so they may have had the money in the bank to buy a luxury. if you didn't have a job you might have been out of work for a while eating up your savings. While credit cards were around most people didn't have one so you really can't use the purchasing ideas of today against back then (even though we have a bad recession, food and energy inflation is though the roof and long term unemployment is worse than it was back then, people live on credit cards now and still make impulse purchases even if they don't have the money which they didn't back then typically)
P

I still remember the purchase price of my A2. I was working for ComputerLand and as such qualified for the Apple dealer employee purchase plan. I could get an A2 for 40% off retail. I went bare bones figuring I could get the other parts cheaper to build out my system. A 16K A2 cost me exactly $808.00. I still have the cashiers check receipt. I worked for many months two jobs to afford it. I got my disk drives surplus from California digital for $250 each, (Shugart model 400's). Bought cases and analog controller through my work. I figure I saved about $150 per drive this way. I was the only one of my half dozen or so friends that "Appled" that had two disk drives. I bartered and worked for the rest of the parts (RAM, Integer card, disk controller). It was a lot of money back then. It was for all of us. We were that into it.
C

On September 21, 1978, the state of Minnesota and MECC reached an agreement for Minnesota schools to purchase Apple II systems directly from Apple. For less than $2000, a complete system included two BASIC languages, a mini assembler language, a diskette drive, communications interfacing capability, and a television monitor. I don't recall the final numbers sold, but it was in the thousands. Initially, for the first couple years, Apple supplied 9" Sanyo monitors. I think later on it switched to the Apple /// green screens with the dark fabric on the screen to reduce glare. Here is a photo of an original Sanyo still in the box shipped from Apple to MECC... 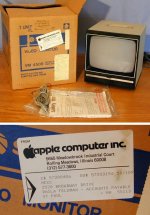