I picked up a no-name 486 laptop from Craigslist a few days ago. It's actually in pretty good shape; the caps all look fine, there's no corrosion anywhere, and the Ni-Cd CMOS battery was encased in heat shrink tubing, so what little corrosion was there never made it out onto the motherboard or any other components.

The part I've made it to figuring out now is the hard drive. It has a non-functional Conner CFA170A 40-pin IDE hard drive (yes, a 3.5" desktop drive in a laptop!), but the strange part is that the power is provided from a 3-pin connector that's part of the drive (there's also a standard 4-pin molex connector, but it's unused). I want to replace it with a CF->IDE adapter, but most either expect a 44-pin IDE connector or a 40-pin connector with supplemental power. The particular CF->IDE adapter I was looking at (Syba SD-CF-IDE-A) has a 4-pin connector that I assume is for power when using a 40-pin IDE connector, but the cable probably isn't compatible as-is.

Is there a pre-existing cable out there to accomplish this with a CF->IDE adapter, or am I going to have to create something custom? 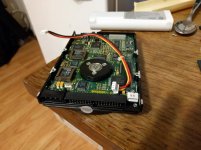 Damaniel said:
Is there a pre-existing cable out there to accomplish this with a CF->IDE adapter, or am I going to have to create something custom?
Click to expand...

If you can find out the name of that 3-pin connector that attaches to the motherboard then that should simplify the search for a cable. Note that you don't need the 12V (yellow) cable for CF media.
S