Some BBC Love from the USsa 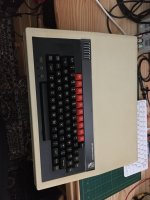 Just wanted to give some BBC love there are not a lot of forum posts on these cool computers. I received mine several weeks ago and after replacing rifa caps in the power supply I tried to get a Turbo MMC working in mine. No matter what I tried I could not get the MMC working in it.

I later learned that my system is a very early example and shipped with the first version of basic and the os roms. The seller who provided me with the turbo MMC graciously burned some new os and basic roms for me and sure enough worked like a charm after that. Just a heads up to future beep fans that can’t get their turbo MMC working check your os and basic versions.

Also just joined the thread after lurking for a while awesome community hope to share more with you all!

They are very complete machines. Its worth getting Iain Birnbaums Assemble Language Programming book as that opened my eyes to correct programming using OS calls.

I had it in an early issue 2, and they came with multiple EPROMS's as I remember and I had to buy OS 1.2 but I thought that came out really soon ?

I have the MMC, but I find a Gotek is also very useful, especially as you can save things with it (though of course you need the disk upgrade to make it work)

Reminds me, I must get my Black 'Linear' PSU BBC A up and running.
M

It was in 1 eprom. I did research and found that the case badging on mine is of an older style as well. I purchased it online from its original owner she said it was her family’s first computer and got it in the early 80’s but didn’t have any more info than that.

Yes, the original units had 'BBC' on them which had to change to British Broadcasting Company due to some problem overseas with 'BBC'. I do remember at the time, the comments about the original OS using up the sideways ROM sockets as it came in four slow EPROMS. As I recall, the way it was arranged meant the BASIC was in the OS socket and permanently selected, with access to the OS only possible at 1MHz in this configuration. The OS should be in IC51 socket, is your EPROM in this socket ?

http://chrisacorns.computinghistory.org.uk/docs/Acorn/Manuals/Acorn_BBCSMOct85_Sec1.pdf section 4 certainly indicates is was four. Strange. Yours is certainly not a US model as their boards were completely different to achieve FCC approval.

Just done some reading and there seems to have been a right old mix of OS ROMS, including OS 0.1 in 4 and 1 EPROMS and OS 1.0 in 2 EPROMS mounted on a daughterboard plugged into the OS socket !

Shame I lost my original issue 2 machine, but I do have a my Linear PSU model A issue 2 and an issue 7 with a couple of Master 128's and I also have the 65C02 second processor too, but its only use really is for Elite.
Last edited: Nov 8, 2022
M

I would have to check on where it was plugged in I had since removed it and upgraded to 1.2. Yea not a US model imported from the UK
M