My Z-100 wouldn't power up the other week so I spent some time investigating. First unplugged the floppy drives and the CRT, machine powered up OK. It then seemed to go open circuit (infinite resistance across the mains input), but then it was OK again - I guess the power switch was oxidised.

I plugged one floppy drive in, powered it up then pop - a tantalum capacitor was blown. I swapped out the drive (Tandon TM100-2A) from another machine, Z-100 then powered up OK, added 2nd drive and CRT and all OK again.

Taking it all apart to get to the bottom floppy drive was a PITA. I counted 27 screws and bolts that had to be removed just to replace a floppy drive - hardly built for ease of servicing, although the service manual is excellent (used it years ago to fix the PSU).

Top tips:
1. Use a nut runner (I didn't, some of the screws were very stiff).
2. Attach a paper clip to each of the two sliding case catches, these then dangle out of the back of the machine and make removing the top cover easy.

I now have two working floppy drives (yahay!) the bottom drive had never worked (would give read errors), so will have to re-test once I've swapped the dead cap for a new one. I only have MSDOS 3.11 boot discs, so am looking forward to getting CP/M-85, CP/M-86 and some other versions of DOS up and running.

I had another outage on this machine last month (hard to believe it was almost a year since the first problem). I had just bought a copy of CP/M-85 (thanks Eric!), a had literally just booted into CP/M for the first time and the machine shut down.

I suspected the second floppy drive so disconnected it, still no joy. I disconnected everything from the power supply and attached a dummy load, again no output (fan didn't start). I then had a dead power supply to fix so took it to pieces. I did this a few years ago to replace an electrolytic capacitor (on the 12V output from memory), it is a nicely engineered supply with one large PCB and one small sub-PCB, everything comes apart without too much hassle. Previously I removed the wires leading to the 240V/120V switch as these weren't needed here in the UK (setting it to 120V and connecting it to the mains would just destroy it) so removing the PCB was no problem. The sub-PCB is connected to the main PCB by about 8 single strand wires, the solder joints on these were clearly poor so I dabbed some new solder on and put the PSU back together. It then powered up with the dummy load, so I attached it back to the Z-100.

The machine didn't power up, but with the dummy load attached (which I fitted LEDs to) I could see the LEDs flash so the PSU appeared to be starting then detecting a short and shutting down. By removing connectors again I found it was the connector into the motherboard that was causing issues. Using a multi-meter I found a short between the +16V and ground. This feeds the S-100 bus, I only have one card in there which is the Z-207 floppy disk controller. I removed this card and attached power back to the motherboard, now powered up fine. The Z-207 board schematic showed a capacitor in parallel with the +12V regulator input, C26 1.0uF tantalum. It doesn't look like a capacitor though, it looks like a diode. I removed it and sure enough it was short circuit. I looked carefully with a magnifying glass and it said 25V rating, I replaced it with a 35V 1.0uF capacitor. There is a similar cap on the +5V regulator (8V input), hopefully this is a 25V part also so should last a bit longer. I plugged the Z207 board back in and re-attached the floppy cable, now working again like a good-un.

Next job is to download some software from Eric's wonderful archive and get playing!

Here are some pictures showing the PSU PCBs and where I re-soldered it, and where the C26 capacitor on the Z-207 board was. 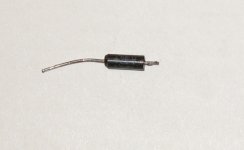 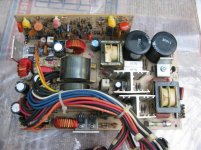 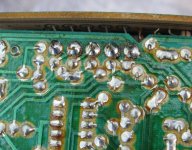 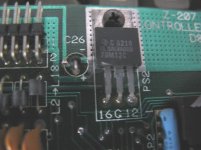 Your power supply looks slightly different from mine. Do you have the all-in-one model or I wonder if something varied for international models? Here is a picture of my supply. I have the Z-100 without the integrated monitor. 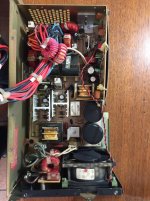 I have the all-in-one unit. Here are further photos: