A portion of my collection- Many pictures

Another small update, this time to list some of my old test-equipment!
First off, I have an HP 5005A Signature Multimeter (no picture as it's not only dusty but hairy! Cats, y'know.)
It's complete and functional as far as I recall, passes its internal self-checks fine.
Problem is, I'm not sure what use it is to me, nor precisely how to use it.
But I preferred saving it over seeing it go in the skip!
It (and the rest I'll be listing here) came from a local college, by way of being donated to the Union Gospel Mission homeless shelter I was volunteering in at the time.
I was working in the computer lab there, using donated materials to supply the lab as well as build computers/laptops for graduates of the rehab program to take with them when they left the shelter.
Computers/appliances/equipment not suited for the program were recycled if they fell under the limited umbrella of the Washington State recycling program.
The program only took screens/monitors, computers, laptops, certain household appliances like TVs, maybe media-players, and not much else.
Things that didn't fit either of those categories were either stripped/broken down for recyclable materials (primarily metals/wire) or thrown in the bed of the big ol' truck for a trip to the dump.
I intervened on a number of items before they got tossed in the garbage-truck, which they allowed as it meant less to haul off to the dump. (I also acquired a number of lopped-off connectors this way, more on that in a future/different thread!)

Next, is my Elenco GF-8026 Function Generator! 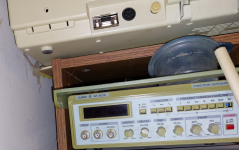 Yes, it's missing the top half of the case/cover, that's how it arrived.
It had a post-it stuck to it mentioning a couple transistors being blown and subsequently replaced, then possibly blown again by a similar accident, likely why the case-half was open/missing.
Unfortunately, due to rough handling by those that loaded up the truck when they were sent to collect the donated materials from the school and who later unloaded them into apple bins (by throwing things from the truck to the bins) its PCB was snapped in half and three of the ganged function switches were snapped off. (this was not the only thing so damaged during my time there)
But, with a large number of jumper-wires and three new switches ordered online (once I figured out the exact type they were) I was able to restore it to mostly-functional. (barring one missing button after only recovering two of the snapped-off stems and having yet to diagnose/fix the original fault that saw it tossed into storage for years) 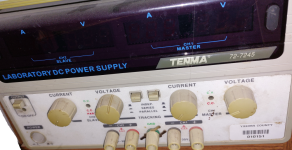 It, unfortunately, was DOA and hasn't been improved since.
The big toroidal transformer was open circuit on the mains-side and the thermal fuse was embedded under ALL of of the windings, down near the toroid.
I unwound it, intending to attempt repair (and still have all the windings in a box somewhere) but it really wasn't/isn't worth the effort and its a cheap, low-quality supply anyway.
Once contemplated putting different, possibly multiple, transformers in it but there exists no documentation on the output voltages of the original, so that's a bust.
So it sits, waiting to be used in some project in the future or to get broken down for parts. 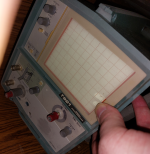 It, like my other equipment, is at least semi-functional but it came without leads and I'm not familiar enough with scopes to accurately evaluate its health.
It is certainly old and well-used, having come from the storage rooms of a local technical college.
Unfortunately, given how much junk and stuff I accumulated in my energetic, well-meaning younger years, (and still living with my parents) I have no place to set any of this up for use with projects.
Until next time!
G 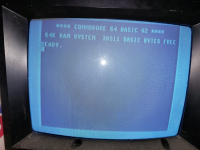 To expand on that a bit, I found my old composite audio/video cable and hooked the C64C up to my tiny color-TV via the VCR it's sitting on and attached to.
WAY better clarity than the RF output! Also, looks like it detects all its ram and all the keyboard keys appear to work properly.
Still haven't gotten the power-supplies finalized/built or built the saver-circuit, but I did get some more solder and make the first steps on the latter.
Lastly, I got the DIN-plugs thread made and posted: https://forum.vcfed.org/index.php?t...ing-din-plugs-for-projects-pictorial.1239840/
Until next time, this is Wolf, signing off.
G

Li'l update! Got more solder, got back to work. (mostly tinning wires and removing excess solder from salvaged parts)
Made some minor progress on updated-design power-supply board, got the heat-sink and regulator mounted to the perfboard. 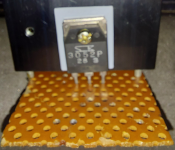 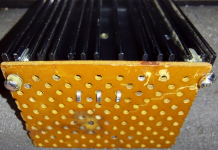 Board for the saver-circuit, with the relay soldered-in and the few other components, that have been gathered so far, placed on the board.
(not in anything like final positions yet, just loosely stuck in the board) 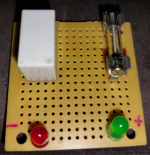 That's all for now!

GearTechWolf said:
Li'l update! Got more solder, got back to work. (mostly tinning wires and removing excess solder from salvaged parts)
Made some minor progress on updated-design power-supply board, got the heat-sink and regulator mounted to the perfboard.
View attachment 1245920View attachment 1245921
Board for the saver-circuit, with the relay soldered-in and the few other components, that have been gathered so far, placed on the board.
(not in anything like final positions yet, just loosely stuck in the board)
View attachment 1245922
That's all for now!
Click to expand...

Yeah! Old non-plated perfboard. Don't recall where it came from, probably my dad's old electronic stuff.
It used to host four large rectifier diodes arranged in a full-bridge with a 5-volt regulator, until I was testing C64 power-supply parts and mistakenly hooked it up to line-voltage (120AC) and vaporized one leg of the regulator!
The plasma-arc generated by that event gouged a chunk out of the surface of the diode next to it, but I think (hope) that it's still intact.
I managed to scrape most of the carbon off the board after removing the components, so I don't think carbon-tracking will be an issue.
The heat-sink (salvaged from a bad ATX supply, I think) just so happened to be a very close fit to the hole-size and hole-spacing of the board, needing just a slight touch with the dremel to notch the broken edge to a tight fit for the post at that end.
The brass ferrule removed from a salvaged two-prong power-socket was also the perfect fit to hold the one leg after passing through the intact through-hole, while the other got a snipped component leg wrapped around it and soldered.
Between those and the three legs of the regulator, it's pretty solid! (aside from a crack/split that I'll glue the next time I do a batch of super-glue repairs)
As for the saver-board, I had to file down the legs of the fuse-holder to fit them through the holes in the board.
Done a little more experimenting on DIN-socket modifications and have determined that adding pin-receptacles to those is quite a bit more difficult than modding plugs, likely requiring the creation of sturdy drilling jigs to hold things in place. (and to avoid drilled fingers, don't worry it was shallow)
What have you been up to, working on any projects currently?

Amazing perfboard. Like two month ago just bought o "lot" consisting on a set of electronic passives and 74xx from ebay and got a very similar one: the one with all lines connected in one direction, which is great for small things. The other day just made a simple circuit I needed and it was amazing working on it. It reminded me when I learn to solder around 15-16 (??) y/o and use them for my first and short-circuited things. Amazing stuff.

From your words I get you really had a good time creating the part for your power source. You're the living proof that it is not only about computers but also about everything around them. Like your point of view focusing on those components, as there's a lot of magic there. Please keep up the good job and posting that very retro-empowering pictures ;-)

Sorry man for my short replies lately. Working hard on a work project and enjoying now on my holidays until Sept 26th. I will not be able to respond much as I'll be away from home from tomorrow. Will keep tracking you on my back

Not many projects, as unfortunately I live in the UK but all (or almost all) my stuff is in Spain. So I am purchasing on the UK when I found something interesting, keep a small stash there and bring the main things for storage, so when we move back I would have a lot to work on. Today I've brought a Vic-20 and a BBC Micro, as my space in the UK is quite limited. I just purchased three weeks ago three Sun systems (1xUltra Enterprise 2 + 2x SparcServer 10) as I had only one Sun (a Netra T-1) and really want to expand. Will begin to work on them on my return and hopefully make them work, as they seem to work.

Enjoy you power source and please keep posting pictures. I do really love that old perfboards and the stuff you're building.

Oh nice! I need to get a bunch more perf-boards of various types/styles when I can afford it. Been salvaging ones from old projects! XD

Oh yes, it's good fun! I enjoy gaining a greater understanding of the components, and recycling/reusing whatever I can.
I'll definitely have more pictures as I go!

No worries, we all have lives outside our postings here. Hope you have a great time on holiday!

Yeah, that's a bit of a distance issue between your stuff and you!
Never done much with Sun systems, interesting the similarities and differences to IBM/DOS/Windows-compatible stuff.

I will! Still a bit slow going, need to buy some parts since it gets too crowded if I make it work by combining the parts I have on hand.

Ha, I don't mind that! It's good when forums have that familiar/friendly feel, no?
Just had to have enough mental energy to make a proper reply, and temporarily forgot, which is why this took a bit to get back to. XD

Speaking of pictures, took some of another project! I want to build a perf-board C64 into the case from a busted Omnikey 101 keyboard. 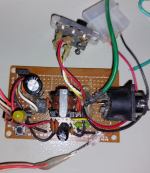 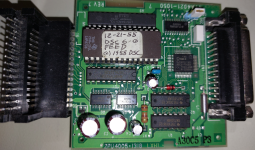 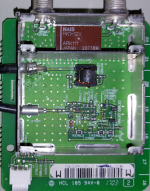 Going to have to do some re-work on what's there, and the pictured parts may not all be part of the final design.
There are several things about the power-board I'd do differently/better now, so it'll get reworked a bit.
The 30-pin card-edge connector doesn't have enough pins to be compatible with a C64 cartridge, and the OKI-data printer-port card (with random EPROM in the socket) may not find any use in the expanded/upgraded C64 I'm dreaming of.
The RF-modulator seen here was salvaged from the chassis of a dead TV and may or may not be adaptable to use in a C64-like system, have to do a lot of research, learning, and testing to figure that out.
The top case-half needs a variety of work, from welding on mounting points to filling in the holes and making the keyboard I built fit/mount in it.
Before I get to this project, if I ever complete it, I'll need to use my C64C to test the chips from my three dead C64s and revive those as best I can.
But before all that, and before buying the parts I need to do the repairs, I need to get back into shape and get a job!
That's all for tonight.
You must log in or register to reply here.
Share:
Facebook Twitter Reddit Pinterest Tumblr WhatsApp Email Share Link
Top