A rather strange Commodore C128D

There was no NTSC 128D sold like this in the US or Canada, so this is some kind of production sample or development machine that was never mass produced. They shipped the metal DCR instead in North America.

You have a really cool thing here. Want to sell it to me?
D

rittwage said:
There was no NTSC 128D sold like this in the US or Canada, so this is some kind of production sample or development machine that was never mass produced. They shipped the metal DCR instead in North America.

You have a really cool thing here. Want to sell it to me?
Click to expand...

Well, I don't think that that would be fair to the world at large, do you?

Hello - thought I would post a follow up to this rare 128D. Recently the previous owner passed away and I had the opportunity to purchase it. From the collection I saw, Richard was an avid retro computer enthusiast and we've lost another great asset to the retro community. For those who knew him, I am sorry for your loss.

Like Richard, I had no idea what I was buying. I took it home, opened it and started to research based on what I saw. That's how I got here. It does indeed appear to be a preproduction 128D, 120V and NTSC. Board S/N: 129. As previously noted there is no sticker on the case itself. I've sent pictures off to Bil Herd who did respond. He believes it is a pre-FCC / pre-production machine possibly assembled as a demo for CES (or World of Commodore?) I have found a YouTube video of a similar board S/N: 323, but assembled as a standard C128. However I see some differences even between that one and mine. It was likely still evolving at that point. You can view the video here:
The artwork rev # printed to the boards does not correlate with the actual working rev # Bill tells me. The back of this board is printed artwork "REV 3" and there is a s/n 129 on the topside of the board. He recalls they took "rev 6" boards to CES. An actual "rev 3" did not even have a working Z80 yet. There are quite a few jumper wires on the backside of the board. I have taken the machine apart to clean and repair. While it is apart I am photographing and documenting as much as possible. Although Richard did post it was working back in 2019 there are some broken wires going to the drive logic board and a broken drive mechanism. It does boot into both 128 and 64 mode. Once I repair the drive I will do further testing including CP/M. The drive board appears to be a standard 1571 board stuffed into the machine with wires hand soldered to a connector for the main board. All of the C128 specific chips are ceramic, while the others either have 1984 or 1985 production dates which would indicate they are original for the time of production. The case is far from perfect and indicates it certainly got quite a bit of use at some point in it's life. Possibly travelling as a demo unit? It would also make sense that Commodore likely sent demo units out to software developers early. So maybe that is another reason it was built? If anyone is interested in hi-res pics of the board send me your email.

I feel extremely privileged to own this piece of 128 history and look forward to discovering more about it. I've been a C128 enthusiast since a kid when I purchased one with my paper route money. Anyone with more info or leads to more info, it would be appreciated if you could message me. I am not able to make VCF East or I would bring it with me to display.[/MEDIA]
Last edited: Mar 25, 2022
C

First off, I am sorry to hear about Druid6900's passing.

Second, I have a "C128-D Kentron" sample that is in the plastic C128 case and is NTSC. This has a Rev 7 motherboard. I wonder if Bil may be referring to those units? 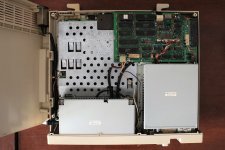 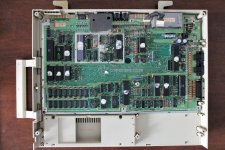 Does yours have the raised lettering on the back for the ports? Although yours is marked 0041, it appears to have a later board. I am not far from you, would love to see yours one day to compare in person.

Mine does have the writing on the back. Here is a picture. I do believe yours is older as the labels have a different number sequence. Yours is six digits and mine is four so I don't think they are the same series of labels. 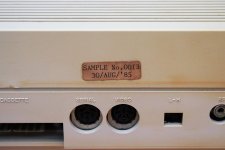 You are probably right. Yours looks like a dedicated sample run. No outside labeling on mine, not even the C= logo on the front. I also see your internal parts are labeled as well.

Do you know the history of how yours escaped Commodore? 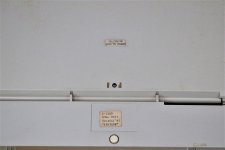 The other thing to note is that this unit is a "Kentron" unit. Kentron was a small Japanese plant owned by Commodore who used to do one-off prototypes and small run computers for Commodore. I don't know how many units there are but I am guessing there are at least 13
R

I've been working on the machine tonight. Getting close to having it all back together!

I believe this is a prototype... looking at the ROM's, those were not "typical stock" roms.... and some other minor features.... also mentioned earlier, since this is a 110V US Machine, the plastic case was not allowed to be sold to the public in the US (Thanks to the US GOVT FCC) - but you might have a developers system also, these were given to a few software vendors of the time, to write code and port programs into the Basic V.X code (either v. 6 or v.8)