Recently I bought a completely NIB bundle of wordstar, professional and correctstar on Ebay. I had no idea which version or what OS it was for, but I went for it. It came in three separate shrink wrapped binders all shrinkwrapped together. It's been sitting in my bookcase for a couple of weeks but today I decided to install it on my 386 and this is one VERY strange package. I hope someone here has some experience with wordstar, micropro or strange software packages as this is way weirder then I'm used to. 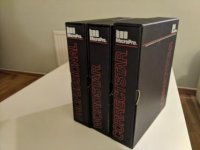 First off, the shrinkwrapping looks really professionally done. I find it hard to imagine that someone has opened these, but when I opened the wordstar binder I found that several of the pages of the manual was stuck in the prongs of the binder, so I had to open them and place the pageholes back in place (I don't know if I'm making sense), and there were handwritten notes in there. That can't be normal? This version of wordstar is from 1979, before my time, I have no idea how people rolled back then. The flopies say DEMO, NOT FOR RESALE 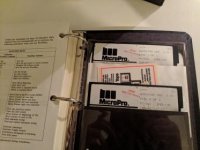 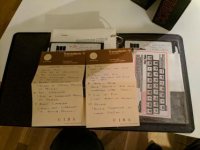 The second binder also had pages that had come loose, but even stranger was the floppies, or the lack of them. This was the Professional binder, so it appears that it was supposed to come with spellstar, correctstar, mail merge and starindex. Inside the binder were two floppies: Wordstar disk 2 and correctstar disk 1. It also came with three empty sleeves for floppies. 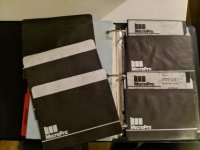 The third binder was the correctstar binder. Inside was the same documentation that was in the professional binder, and two floppies which appeares to be correct. The two correctstar floppies. 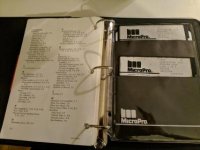 Now to add to the strangeness, the two wordstar floppes (disk 1 and 2) contain the exact same data, and the duplicate disk 2 from the professional binder adds nothing new either.
What do you poeple think? Am I missing something? I've managed to get it installed on my HD and it works, all the disks are error-free.

No, this is much later than 1978--that date pertains to the original program copyright. I can't make out the version printed on the labels however, but I'd put them sometime in the late 1980s.

Micropro changed their packaging, name and logos several times. For example, the 1970s CP/M WS was 3-ring white vinyl binders. The logo was rounded "Micro Pro" lettering. The first version of WS released for MS-DOS was 3.0, around, 1982 and was a pretty literal clone of the CP/M 86 3.0 WS, which was a port of the CP/M-80 3.0 version.

Micro Pro, buoyed by initial success in the PC world made some huge missteps and began losing big-time to competitors such as Word Perfect and Microsoft Word. The version of PC Wordstar that you're most likely to find is 4.0, packaged in red binders. Interestingly, for some reason, MicroPro decided to release an 8-bit CP/M version also in red binders--mine has the usual 3-block Micro Pro logo, overstruck by a yellow "The New". And "Wordstar" is just plain block letters, still.

Sometime in the later 1980s, I moved to Wordstar 2000. The logo changed to a "star" in place of the "a" in Wordstar and continued on through WS2KPlus. Around 1989, MicroPro renamed itself to "Wordstar International"; of my two versions of WS2K, one is identified as "MicroPro", but not prominently--it occurs on the back cover of each manual, black like your copies.

The other version identifies itself as being from "Wordstar International", as does my copy of Wordstar 7 for DOS--the last DOS copy I own. Still in its shipping box and probably never used.

Early WS for the Imsai 8080 shipped initially as WS 0.9, which is where I became acquainted with it. I suspect (without looking at your disk labels) that your copy is somewhere around 1988.
K

Are you sure about the date of 1979 on it? I thought WordStar Professional started as a bundle in the early 80s with version 3.3 which incorporated spellstar, correctstar, mail merge, and star index.

Does it have a tiny install manual indicating what system is was for? That might layout the expected disks. Though with a demo pack, there is no telling what cost reductions were made. I suspect it was opened and one set of disks used while the rest moldered in the boxes to give prospective purchasers an idea of the shelf space needed.

First of all, the forum software shrunk the images so they are hard to see. The forum does that to any image larger in file size than 99k bytes. Use an image editor to size the images to around 640*480 or 800*600, then save as a JPG, re-adjusting the compression level until it is less than 99k. Or use an external image host.

Anyway. sorry to hear you didn't find what you expected. That happens sometimes. Personally I like this style of Wordstar manual as it looks very "Star Wars-ish".

It sounds to me like someone did re-shrkinkwrap these items at some point. If those notes are user-written then I'd suspect it was a collector or re-seller somewhere along the way. If those notes were written by a salesperson, then it might have been re-shrinkwrapped as part of their promotional ("not for resale") deal.

Sometimes "not for resale" means the software is just a crippled demo version, but in many cases a vendor just slaps "not for resale" stickers on normal full-version disks. You never really know what you are going to get. Typically copies marked "not for resale" were freebies or very low-cost promotional items. Items marked "for evaluation only" also indicates no official license or support was offered.

Pages in 3-ring binders come loose all the time during storage and shipping. I don't know exactly how. Hit it at just the right angle I guess. Just be glad if the pages didn't get torn up too bad or the rings squished. Not unusual.

I think I can just make out the word "PC-DOS" on the disks. If you could get a directory on a 386 then it would be for DOS. Is there anything on those disks that can run? It could just be a slideshow or interactive tutorial. (Or it could be garbage or a virus).

I've also seen instances where genuine shrink-wrapped manuals did not contain a disk because in actuality it was part of a "network license", where the end users would only receive the manual and only an admin would get a disk. But in this case, it looks like it was gutted.

MicroPro loved to slap the date "1979" on their products because that was when it was first released. That copy would probably be ~1983,1984 or so. Does that say "3.30" on the disks? That confuses eBeh sellers all the time.

From copies I have seen, I also get the impression that MicroPro sometimes may have mismatched manuals and disks sets (Oh, here, have an extra manual!)

When you see something still shrink wrapped on eBay, you always have to wonder, there might be a REASON why it was never removed from its shrink wrap.
Last edited: Nov 28, 2018

It's wordstar 3.30 and the software installs and works fine. I've even printed a document on my Star LC24-200. I managed to install correctstar as well, but i have the files installed to C:\PROG\WS3\MAIN.DCT and the directory seems to be to many carachters for correctstar, it "can't find dictionary files in C:\PROG\WS3\MA". Whould be easily fixed.

So the problem is just that I seem to be missing a bunch of disks. As strange as it sounds to me that someone re-shrinkwrapped these I guess you're right, it's possible. Perhaps even plausible considering what is in here.
Do any of you have the correct disks archived or know where i can find them? I can't find anywhere online where this bundle is archived, or just spellstar, mail merge and starindex.

You're not looking hard enough

...and lots of other places.
O

Chuck(G) said:
You're not looking hard enough
Click to expand...

Yes, I've looked on winworldPC but that is one of the two programs that are actually included here. Wordstar and correctstar are complete it seems. Two floppies each. It's the other programs that I'm missing.

EDIT:
Well, No you're right. I forgot about archive.org

Thank you for your first post, by the way Chuck(G), that was very interesting! And I agree with @someguy, this black box looks great! The whole presentation with the manual and floppy labels and everything is really well designed! Great looking package, as they say.