alecv said:
As it is known, Google digitized old computer magazines from 80'th-90'th. It's rather interesting to read "classified ads".
Click to expand...

Yes, but only US magazines, right?
There are many local PC clone brands as well, so local magazines are also interesting.

Highscreen, DAN and MESH were some (I think) Europe specific brands. I'll have to look thru some old magazines. I guess the EU and UK magazines all have much smaller readership what with all being in different languages.
B

Here's a few of mine: 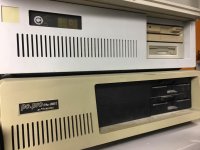 A clone of the IBM AT (missing the badge) that did have a dead XT clone board in it until I put a working 286 board in, and a "PC PRO" by "MicroAge" 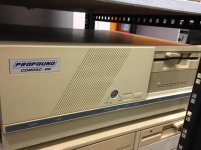 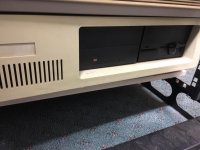 Another Badgeless XT Clone just like the million others. 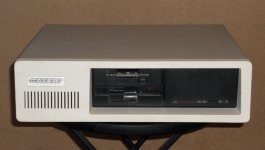 I have an XT clone like the badgeless one shown above. In place of the badge, someone stuck a sticker of a mandelbrot fractal. Looks pretty cool, even if a bit faded after 30+ years.
-Adam

Man, now here's a thread I can get behind, of course I'll be mentioning the same stuff I've had a million times before....

Probably my favorite brand of PC/AT/386 clones would be GEM Computer Products out of Norcross Georgia. You can't get more retro-80's cool than raster-ized Eurostyle Font! They were owned by a company called "Micro Electronics Corporation" or MEC, and both GEM And MEC started in 1983. I have reason to believe GEM was a Military branch because the 286 and 386 I owned BOTH came from military people, the 386 from a Military Lawyer who did computer tech in Montgomery, and the 286 was an E-bay auction from Ft. somethingsuch in Texas. Honestly, if I get back into collecting, THESE are what I'm going after with a gusto. The 386 is my favorite PC case of all time - it mimics the look of the Compaq Deskpro 8086/286/386 whilst retaining full AT compatibility perfectly. I'm still looking for more of those. The 286 is a generic AT case that must have been a nicer version because it was powder-coated, top and bottom, in textured darker grey paint - even inside. Not a sharp edge anywhere. GEM picked some pretty nice cases for their computers, wish I knew who made them. The 386 also had a cool label on it where the Deskpros had a label telling you what everything inside the computer was - except it was a white sticker that said "GEM Assembly Drawing" showing how to add drives with the drive rails - the version on the assembly drawing had a Turbo switch.

The XT Clone in those pictures I made a home-built "of the period" case badge for. The company was called "Micro Configuration's Corp" and the sticker in back said "Micro Configurations Corp Model 0A", IIRC they were based out of New England somewhere, I'm scratching my head trying to remember. Sadly that computer was destroyed along with the IBM 5153 CGA monitor in a e-bay auction gone awry in 2005 before moving to WA. That computer had a flip-top case too, I loved working on it a lot for that reason, just pull the monitor off the top, pop it open, make adjustments, power on. Most upgrades and repairs took me less time that way.

I also showed my New-Old-Stock XT Case that my 486 currently lives in. The box it came in said "Songcheer TW" so it's a taiwanese made clone that seems to be trying to mix the look of the IBM XT with the AT and the Compaq Deskpro. The Case badge attaches to an indentation on the lower left hand side of the front grill. That one has always been a "Creeping Net" system as I bought the case new-old-stock from Bjsurplus on e-bay in 2004. Just figured you'd find that one cool since I've never seen another like it. I have reason to believe that Songcheer also made the GEM 286's case because the control panel on this one is identical to the GEM 286's in screw pattern and mounting, but differs by buttons, layout, and keyswitch type. 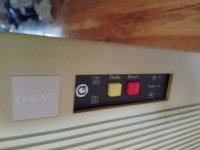 Another one from eBay: https://www.ebay.com/itm/Vintage-DAVAC-Personal-Computer-with-Floppy-Disk/162939462620