so tonight I opened one of the two "speedup kits" that I have acquired in a mix match box of parts.
this kit is simple, a board that will end up plugs into the Model 4 U3 and the U3 chip onto the board, and swapping out the Z80A (4mhz) for a Z80B (6mhz) CPU. simpleâ¦ well, in reality, take a lot longer to take apart the computer internal to get to the mainboard than apply this kit. simple it IS!
NB: I have 150ns 4164 chips in the system already installed and strongly suggested to get good speeds 120ns would be better.
step one: I found a program called "clkspeed/cmd" for model 4 (runs on TRSDOS/LSDOS 6.x) and ran a benchmark to get an idea, 3 mins later the result was on the screen, 3.62Mhz at top speed.! with the Z80A stock from TRS.

turned off the machine, found the U3 chip, removed it carefully (notice some mod already one it) and put it on the alpha speedup board and reinserted the board in the place where the U3 was pulled from 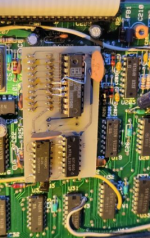 Next, I replaced the z80a with the z80b that was provided in the kit 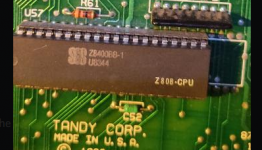 closed her up and ran again the same test and low and behold âspeedââ¦ Seriously, now calculations at 2 Mhz took 103 seconds, 57 seconds in 3.66 Mhz now barely take 45 seconds in 4.64Mhz ! the kit claim to fame only 5.x Mhz speeds, so I am close and better speed would be acquired with faster ram I am sure but happy anyway.
Maybe I should put a heatsink or a water cooling system. Kidding aside, 1Mhz was a lot in 1982, and at 65$ this kit WAS the easier and cheapest kit available on the market at the time.

yeah, I guess I still have another I was considering it, it's a really simple board, but is there really a demand for it. working on taking wait times out to get more out of it and test 120ns ram to see if that makes any differences as well.,

I tracked the article that mentions for Model 4 NGA (not for 4GA models) motherboard that lifting the Pin 27 of the CPU would remove the wait states of the CPU (article can be see at https://archive.org/details/compute...lishing-aug-1993/page/8/mode/2up?q=z80+pin+27) so here we go , pulled the new Z80B chip and bent gently the 27th pin and then re-instated it back unto the board, after reassembly. ran clkspeed again so now from the base 3.66 to 5.17 Mhz ( +41.25% cpu speed increase) with a little kit and a bent pin.. still running 150ns chips as ram. 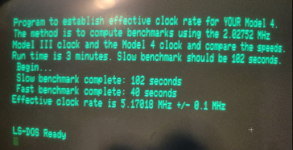 If we can get good images of the board and work out where the connections go under the chips, I would have a go.
W

Patrick Bureau said:
I tracked the article that mentions for Model 4 NGA (not for 4GA models) motherboard that lifting the Pin 27 of the CPU would remove the wait states of the CPU (article can be see at https://archive.org/details/compute...lishing-aug-1993/page/8/mode/2up?q=z80+pin+27) so here we go , pulled the new Z80B chip and bent gently the 27th pin and then re-instated it back unto the board, after reassembly. ran clkspeed again so now from the base 3.66 to 5.17 Mhz ( +41.25% cpu speed increase) with a little kit and a bent pin.. still running 150ns chips as ram.
Click to expand...

Is removing the wait states reliable? I mean, isn't the whole point of wait states because they're necessary? Or are the chips you're using fast enough to not need them?

Of course TRS80 has no way to know what speed RAM chips is installed so data is either available or it's not on a read.

Many of these issues are discussed in Misosys quarterly regarding XLR8.

Once you get so fast most motherboard will start getting flakey. I forget that speed but I think it's in quarterly's.

whartung said:
Is removing the wait states reliable? I mean, isn't the whole point of wait states because they're necessary? Or are the chips you're using fast enough to not need them?
Click to expand...

The wait states were added by Tandy for the early Model 4's. AFAIK, none of the model 4Ps or later Model 4s had the wait states.

What I mean to say is speed of memory is not going make it run faster or slower.

It's more accurate to say it partially dictates speed CPU can run with or without errors.

Speed of I/o ports is another part limiting CPU speed.

With trs80 doing much I/o counting on delay loops to run at a specific speed or counting time to repeat keyboard keys held down etc.

It's part of reason I cannot run my emulator at full speed without all sorts problems.

Using xlr8 upgrade as an example.

I think most all motherboard requires wait states.

Z180 has built in wait state generator that can be changed under program control.

Stock TRS80 does not have this.

On the first issue of speeding up the system;
The FDC will be fine and trouble-free up to 6MHZ, at 8Mhz (z80H) there is a change that needs to be done (Seatronic's speedup board explains it) to permit no issues with the floppies.
The RS232 at 6-8Mhz is fine as it uses another control signal regimented at 5mhz anyways.
The wait state was only on the Older NGA boards (model 3/4) once the Gate array boards came out for the Model 4,4d,4p there were no more *wait* being used. and the reason why the pin 27 mod is only applicable to the NGA board, doing this on a GA board will just make the machine stop working entirely), but at 5MHZ there are no changes to be done elsewhere except 150ns 4164 DRAM
As for the RAM Speed not being a factor that also isn't accurate, 200ns, 150ns, 120ns, or 100ns speed of the ram, does matter if you are pushing 5Mhz and running 200ns you will encounter issues of course(lockups mostly), and that is why all speedup kits recommend 150ns up to 6mhz and 120-100 for the 8mhz kits.
Last edited: Oct 28, 2021

Either RAM contents are available on a read cycle or they are not. I have RAM that would work at a higher clock speed than rated and also had opposite.

This comment is related to trs80 had no memory controller. It has no way of knowing if RAM is present or not. other than getting garbage back on a read. In some systems with memory controller it knows if RAM present and it's speed. They are so tightly coupled that the controller knows if not present.

Sadly we had none of this.

Having speed up a couple hundred model 4 ( I never worked on anything but 4) I can tell you some machines motherboard will flake out long before 6mhz.

Not RAM but other issues. Keyboard interface was one of 1st to fail.

If you look at source for floppy driver you will see delay loops saying things like LET IT SETTLE A BIT ETC.

Some motherboard will be tolerate of speed increase where as I had others that just never did.

Back in day there was a big stink at RS about wait states. Marketing between companies of the day were attacking each other on wait states in each others machine claiming public was mislead.

I had people wanting me install 100ns memory thinking machine would run faster. Of course trs80 has no idea speed of memory outside CPU as long as it worked.

I/O failures were avoided by using loops mainly DJNZ instruction, to slow down external read/writes. Changing speed of CPU of course changes amount of delay in these loops.

SVC @pause suffers as now you pause about 80 percentage less.

There were a lot of patches to fix some of these published in Misosys quarterly.

Keyboard is most sensitive. Heck they had a lot of problems making software scanned keyboard work reliable at 4mhz.

Only way I would be sure if trs80 had wait states happening would be to put a scope on wait pin of CPU and watch it. I was always under impression it had a least one but never really tested it.

that's interesting though not surprising that some motherboards were incapable to tolerate speed upgrades or even baseline 4mhz function, I have often observed M4 board (and as well in m3s) motherboard of "a" revision having been upgraded multipole time or repaired with bog-wires all over it, Often I found those motherboards to really need to be retired.
You must log in or register to reply here.
Share:
Facebook Twitter Reddit Pinterest Tumblr WhatsApp Email Share Link
Top