Would greatly appreciate if anyone could provide me with these two diskettes. Still fumbling with my PDP 11/23 system.

You're probably better off getting one of the TU58 emulators running with a SLU on your machine. There are lots of premade TU58 tape images for various XXDP diagnostics sets, RT-11, etc. Especially if your RX01s are not known to definitely be working. Nowadays I usually use AK6DN's tu58em
L

glitch said:
You're probably better off getting one of the TU58 emulators running with a SLU on your machine. There are lots of premade TU58 tape images for various XXDP diagnostics sets, RT-11, etc. Especially if your RX01s are not known to definitely be working. Nowadays I usually use AK6DN's tu58em
Click to expand...

I understand what you are saying but I have had some problems trying that. I specifically want to see about the diskettes.

I can probably write out RX01s for you -- I've got working RX02 drives on my MINC-23 -- I'm just concerned that you may not get anywhere due to some other system fault.

glitch said:
I/We are happy to help you get TU58 emulation up and going

I can probably write out RX01s for you -- I've got working RX02 drives on my MINC-23 -- I'm just concerned that you may not get anywhere due to some other system fault.
Click to expand...

Been around this block before, see: http://www.vcfed.org/forum/showthread.php?63987-Need-help-with-11-23-system/page2

My suspicion is there is something more fundamentally wrong with his system than just the DLV11 interface which does not allow TU58EM emulation to run.

My suspicion is there is something more fundamentally wrong with his system than just the DLV11 interface which does not allow TU58EM emulation to run.
Click to expand...

Yeah, that would be my main concern, that there's a bigger issue preventing TU58 from working -- which is usually quite reliable. TU58 is almost always the first thing I get working on a new-to-me system.

I know a lot of people like PDP11GUI and such, but really I find that running XXDP after you've got a basically stable system is the Best Way Forward. I've caught problems with XXDP on systems people had "tested" with PDP11GUI and found to be "fine."

I very often run the XXDP diagnostics from PDP11GUI. Since diagnostics are in absolute loader format it is very easy to let PDP11GUI load them into memory and run them from address 200. You only need one serial port with the console ODT or emulator working. So in that sense one can test things with PDP11GUI.
L

Yes, I would be delighted to get TU58EM running. Figures 1 and 2 show the computer monitor and the TU58 emulation respectively. This attempt was using a KDF11 and booting from a BDV11 board with updated KDF11B ROMs. Figures 2 and 3 show a current attempt this time using a KDF11B (of course no BDV11 board). The KDF11 always had flakey operation with halts occuring randomly. I tried a second KDF11 board and had the same behavior. The KDF11B seems to run stably with no random halts. However I still obviously don't have the TU58 emulation running properly. I recently obtained a Dilog DQ419 floppy controller which I am in the process of interfacing with a Shugart drive. Hence the request for the RX01 bootable diskettes. Further checking shows that the DQ419 will not boot from RX01s so I guess I will change the request to RX02s. I certainly welcome any help in trying to finally end up with a reliable functional system.
Thank you to those of you who have already offered advice and suggestion.
Cheers,
Al 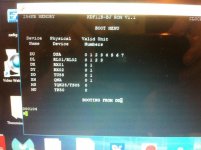 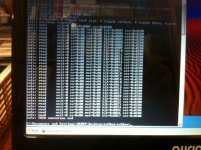 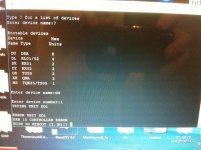 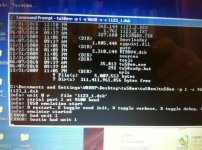 Are you by chance using a USB -> RS-232 adapter on the Windows PC end? I've had hit and miss results with them when talking to old hardware, some are totally fine, some are fine most of the time, and some are pretty flaky. If that's what you're doing and you have another on hand, give it a try.

There was a mention in the other thread about possible cabling issues. If you don't have a proper DLV11-J style breakout cable, you can run one of John Wilson's adapters:

If you don't want to order your own circuit boards, I've got the bare boards, and I can assemble one for you if you like.

I can vouch for the interface adapter that glitch is talking about.
I have a few of them (from him), and I use mine to attach to an RS232-to-USB adapter that connects to my MacBook Pro.
No fuss, no muss, no problems. Well worth it.

Looking at picture 3 and 4. Why are you using DD1 (Unit 1) when you have only attached a disk image to unit 0?
L 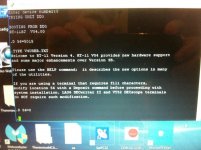 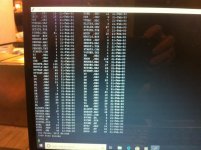 Thank you to everyone who offered help.

And here I was thinking, "he must've been booting DU0: in the first screen and it's just written over the character...I'm not going to suggest that it's just because he's booting DD1: -- that's too obvious!" I suppose it's not at all obvious if you're not used to starting at 0 when counting.

Glad to see it's up and going Now you can see if you can write out RX02s using your board/drive. The good thing about going with a non-DEC RX02 workalike is that it probably has a utility for formatting disks. The DEC drive/controller combo can't format. You can, however, format IBM 3740 SSSD (same as RX01) using ImageDisk or something on a PC and then use an XXDP utility to upconvert it to RX02, if you have to.
M

Great to hear that you have the system up and running. I'm a big fan of AK6DN's tu58em also. It's my tool of choice for bringing up a QBUS system, building boot disks on real hardware, etc. At 38,400 baud it is fairly usable (not much slower than say floppy drives on an RQDX3 interface). I really like the DQ419. I'm using that in a couple of systems. I have a webpage that describes my experience in using the board to format RX01 and RX02 disks and using it to build a bootable RT-11 RX02 disk -> http://avitech.com.au/?page_id=847
You must log in or register to reply here.
Share:
Facebook Twitter Reddit Pinterest Tumblr WhatsApp Email Share Link
Top