Couple of motherboards for trade, looking for a Slot 1 board.

I've got two motherboards here, I would like to trade both for working Slot 1 board. Must have AGP and not intrested in OEM boards, other than that I'm not picky.

The first is what I believe is an NOS TOP Microsystems 386 Motherboard. Its in fantastic condition, I can't find a single flaw defect, scratch or scrap on the entire board or any evidence its ever been used aside from normal levels of dust accumulation considering its at least 30ish years old. I'm unable to test it because I don't have any 386 CPUs on hand (and TBH pre-ATX stuff isn't my area of expertise), but I assume it works fine. Here are some pictures: https://imgur.com/a/QurwE8B 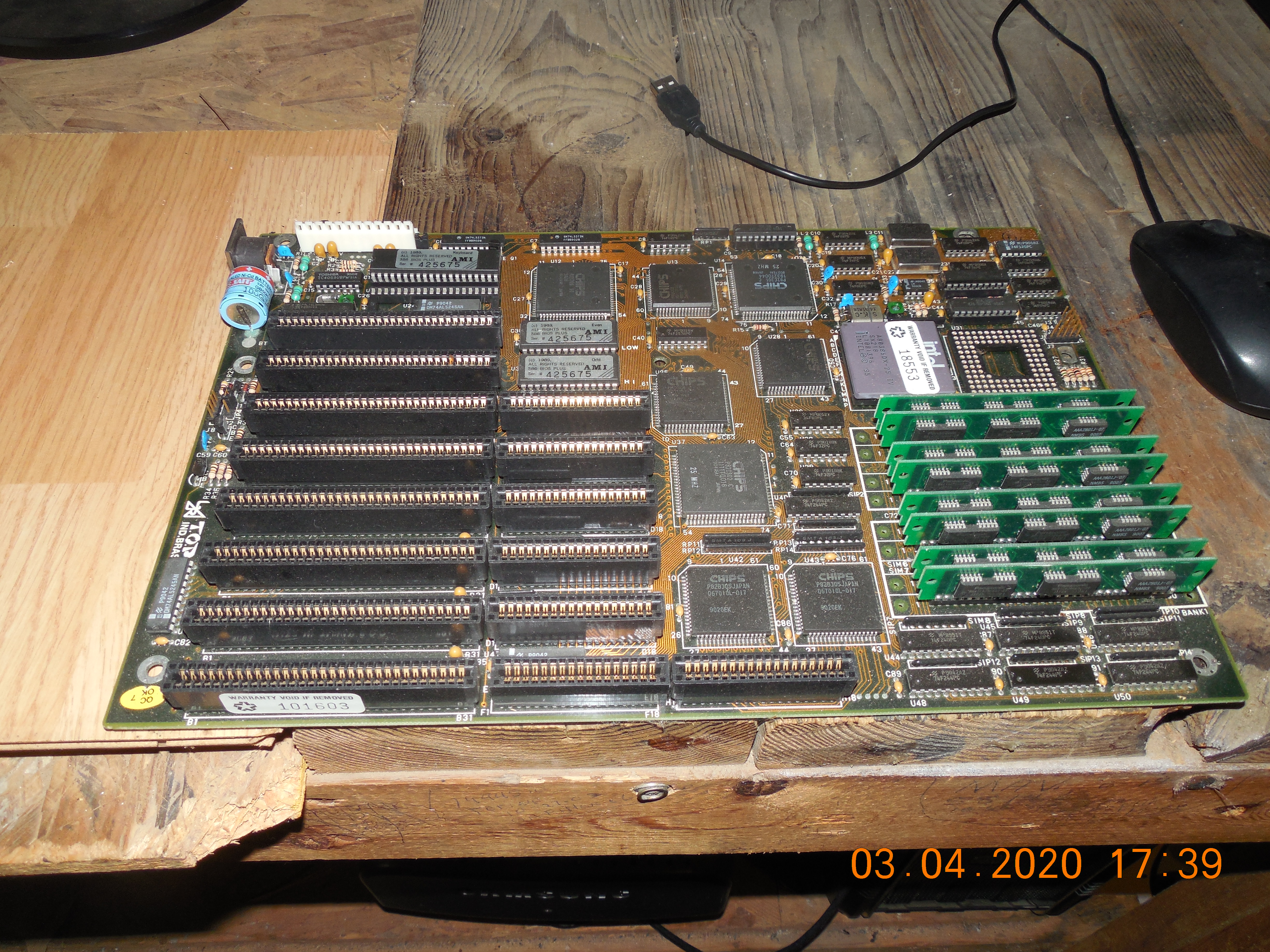 The second is an unidentified Super Socket 7 ATX Motherboard that does not seem to want to work. It has an AMP (I'm just going off notations for similar power circuit designs on TH99) that is cracked in half and the capicator directly after that is leaking, there is also sometype of white residue on the back of the board that I can't identify, doesn't look like any mold or corrosion I've ever seen. I suspect its spiderweb residue. When I found it it was jumpered for 83x4.5@2.2V's which means it had a mid-range K6-2 of some sort on it, I've jumpered it down for a P-MMX 166 to test it. The CPU doesn't even get hot, if you replace that part called AMP and recap those two caps (which are the only two buldging) I suspect the board would work. As it stands I doubt the CPU is getting power. When attempting to power on all it does is turn the PSU fan on, the fan I had plugged into the fan header doesn't even spin up. Its overall a very nice board with 2 USB ports, AGP, 4 PCI, and 3 ISA. It's design is extremely similar to the Gigabyte G5-AX and it may even be some derivative of it. I can include 128MB of memory and a Pentium 90 on request. It was bought off another local collector who said he pulled it from another PC and it was already missing its CPU at that time.

I'm wanting to do more early 3D testing and I need something suitable for that, and I consider a Slot 1 board ideal for that since Super Socket 7 is somewhat pricy (though if you have one you want to trade away obviously I would be open to that).
S

Looks like you've got two boards of unknown operability as well as identity to trade for a working board which is tantamount to a crapshoot.
M

Does that battery terminal look a little green?

What kind of slot is that one in front?

Stone said:
Looks like you've got two boards of unknown operability as well as identity to trade for a working board which is tantamount to a crapshoot.
Click to expand...

What about dealing with 30+ year old electronics that had an intended lifespan of 5 to 10 years ISN'T a crapshoot? Also you've got to admit the reward is pretty high even relative to the risk. SS7 boards are expensive and not very common in my experience, same for good 386 boards. Slot 1 is relatively common, and not particularly expensive.

@MikeS I'm not 100 percent sure what type of slot that is, and after closer inspection there is a bit of corrosion directly under that battery, but its limited to the battery connector and it hasn't spread to nearby parts.
Last edited: May 14, 2020
S

CommanderCochrane said:
...after closer inspection there is a bit of corrosion directly under that battery, but its limited to the battery connector and it hasn't spread to nearby parts.
Click to expand...

There is no way to ascertain that visually on a multi-layer board as you can't see what's happening on the inner layers.
W

CommanderCochrane said:
I'm unable to test it because I don't have any 386 CPUs on hand
Click to expand...

Just out of curiosity, do you no longer have the CPU that is installed in that picture? If you have it and an ISA video card it would be really easy to see if the board will POST using a cheap ATX to AT power supply adapter from Amazon. I know its more effort, but if you don't get any bites in the current state, testing it might help. Good luck!
O