I've got an AMD 100MHz Socket 3 CPU here, and curious if it'll work in the board as in the pics it looks to take 72-PIN RAM, so it *should* be new enough to take it.

I cannot find anything on the model, but plan on using it for some DOS gaming.. so the 100MHz AMD will really help *if* I can use it.

Does anyone have any info on the board? or where to get old gateway service manuals? Gateway's website has nothing on it unsurprisingly. Worst case, i'll just fuss with it... but I want to have the manual to look at for jumpers if possible.

I know i overpaid for it, but for nostalgic reasons I wanted a Gateway2000 - any advice is appreciated (if anything is known about it), as the pics in the listing are not overly helpful.

1. The SX25 in the machine may or may not be a surface-mount CPU (QFP). If so, that's going to make replacement impossible unless there's specifically a socket for a PGA-chip.

2. The chip may also use 5V instead of the (likely) required 3.3v of the AMD chip you have. Unless there's jumpers onboard, you're going to need an interposer of some sort to drop the voltage. There may be issues in setting the frequency as well (probably why you're looking for manuals)...

Big-time. I could have given you the same machine for shipping....
B

Thanks for the reply! I got the machine in.. the PSU is great (i was expecting to need and replace some caps).. other than oiling the fan.

It does seem to be a solid board with Tantalum caps though.. so even when they do finally fail (all tested correct with my meter) they'll be a cinch to replace and keep this up and going. 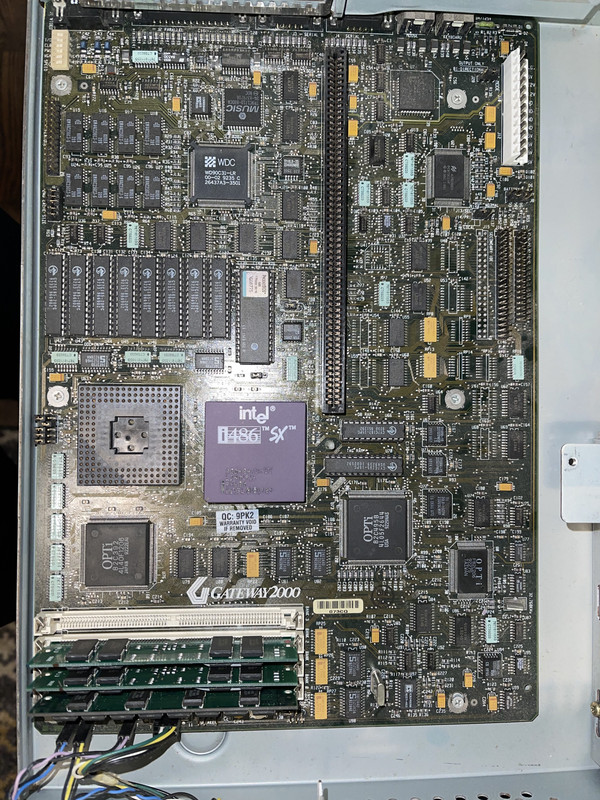 It luckily is socketed though, so I'll try to fuss around with it and If the AMD does not work, it's no big deal.. i'll just grab an Intel 5v processor to replace it.

If you attempt to install the AMD CPU without dropping the core voltage, you'll destroy it almost instantaneously.
B

T-R-A said:
If you attempt to install the AMD CPU without dropping the core voltage, you'll destroy it almost instantaneously.
Click to expand...

Oh yeah, I'm not even going to try it in this board without any jumper settings, It has some jumpers for the CPU.. but that's the extent of labeling.

I will deal with 33MHz for now, and try to find a Pentium Overdrive for it, and worst case grab a 100MHz 486 OverDrive as those seem to be fairly readily available if I decide to go that route.
B

As an update. I got it, and upon digging around a small box I forgot I had in the closet from a year ago (When I decided I wanted a 486 again to begin with), I had picked up a 100MHz Overdrive that was unused and still sealed and an SB32 that was pretty beat up (I'm sure it's going to need a good scrub and re-cap as it's clearly been wet before)

I cleaned up the SB32, and it functions, as well as the IDE (which is good, as the built in controller on this board leaves a bit to be desired with a CD-ROM plugged in), and i've got it at 39MB of RAM. It'a a tad overkill, but i've got two drives - one with MS-DOS 6.22 and WFW 3.11, and Windows 95 to see which one performs better overall with the OD CPU.

So far, Windows 95 is winning for even dos gaming somehow.. but I'm sure it's just been so long i've forgotten how to fully tweak Windows 3.11.
E

I just picked up a 4SX-25 that someone had upgraded to a Cyrix DX2-66, but couldn't figure out the FSB speed settings so it was only running at 50 MHz. After searching far and wide online and finding absolutely nothing, I finally figured out the DIP switch combination for 33 MHz. I still have no idea what the different CPU type jumpers are for.