Hello all! I've been trying to figure out why the screen on my recently acquired 1550sx doesn't turn on despite having VGA display output. Took it apart and it's pretty obvious, its not plugged in! The HDD was removed at one point and I have a feeling the person who removed it didn't bother to plug anything back in.

I can see 2 posts (P9) for display power but I believe I'm missing some extension cable? I was reading the service manual and it makes a note that computers with the plasma screen plug into P9 on the MLB and that those without the plasma screen should plug into a cable at the back of the battery. I don't see this cable so I'm assuming the screen is plasma and should be connected to P9. P9 is also showing 15.20V (positive being the left post). Also don't know what type of connector it is going to the screen, was thinking I could just make my own extension. I was going to hook up some alligator clips to test it but I don't want to fry the whole display if I have the polarity reversed or if there is some hidden plug I can't see.

Any ideas? I've attached some photos for clarity. 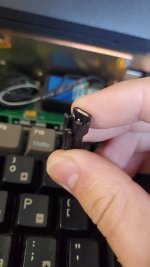 The power connector coming from the display. 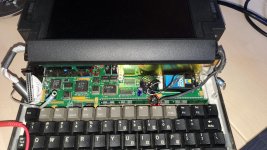