I have embarked on a silly quest to make this work: 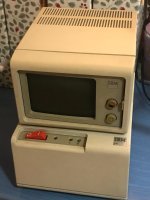 IBM 4704 banking terminal, I don't still have the (expensive) keyboard but that's not a concern as the protocol is pretty well documented and a converter could be made.

My worries are, in this order:

I'm now at point 1, and this is the situation. I'm not getting VSYNC/HSYNC at the terminal side int the output cables I have available, and I'm trying to figure out why. The monitor pinout is something like this, and should be similar to comtemporary systems like the displaywriter:

That is, 6 signals ignoring the grounds and shield.

But at the terminal side, not counting the various grounds I have 9 power and signal cables: 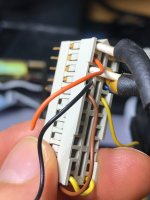 The cable colors mostly don't match with this on the monitor side.

The terminal powers on and one of the video signals is indicating we have a working terminal, because it looks like a line at the bottom of the screen with text below. The video mode is apparently similar to CGA 00h but with chunkier characters (40x12 chars) 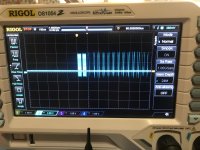 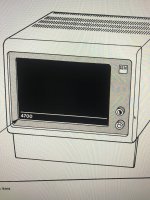 The uknown signals are showing:
Of course take this with a grain of salt as I have no Idea about the actual pinout.

If I had to bet anything at this point, black and yellow would be VSYNC and HSYNC with positive polarity, but they are not showing anything. I tried to put yellow and blue to ground and if I do that, brown goes low, but that's all, no change in any other signal.

This is the video card. 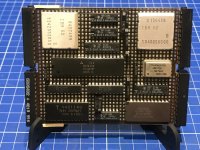 My bets for the components are:


The CRT controller seems to have the correct VSYNC and HSYNC signals (hooray) on pins 27 and 26, that are routed to the canned IBM chip next to the video connector. But those signals are not shown on the available cables cut from the original DA-15 connector cable.

If anyone here is familiarized with systems like this it would be nice to know if you have any idea of how to actually get VSYNC and HSYNC on the output cables, or better the actual connector pinout.

Plan B is routing VSYNC/HSYNC from the CRT controller to the cable using an extra 74LS244, and ignore all the unknown cables, but that is a risky business.
Last edited: Apr 23, 2022

What does your cabling look like? Is the DB15 cable intact at the terminal side and/or the monitor side? I have a complete working unit so I can help out although my terminal unit looks a little different (the lights by the power switch are different).
. 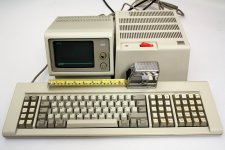 snuci said:
What does your cabling look like? Is the DB15 cable intact at the terminal side and/or the monitor side? I have a complete working unit so I can help out although my terminal unit looks a little different (the lights by the power switch are different).
.
Click to expand...

Hi Snuci, my cable is completely gone. Your very beautiful terminal is the unit from here: http://kishy.ca. Of course I have already studied you images, as it is the only good source of information available, but unfortunately you have a later version that is PCB-based while this is an earlier SLT-board-based version so the hardware connections are quite different.

I have a general idea of the pinout from the monitor side looking at its PCB, I know where the power signals are (top row) and where the video signals are (bottom row). The problem is at the terminal side, your video connector at the PCB is completely different from mine, so looking at yours I don't think I can reconstruct mine, unless the cable colors match. You could count the number of cables and list the colors on the connector. Also you could with a continuity tester, map the correspondence between the PCB connector positions and the DA-15 connector positions (to which position goes each color).

If that doesn't work, the only practical way you could help would involve using an oscilloscope to measure the signals on the connector with the terminal working and the monitor disconnected, but currently that won't even be that useful if I don't figure out how to get that signals actually generated. Maybe you could find that the signals are not generated unless the monitor is plugged in, that could give me some hope to get them working.

I am increasingly pessimistic about my video card status, apart from the HSYNC/VSYNC issue, the video signal looks like what is expected, but it is not quite right as it is like it has a clock signal superimposed. Maybe the canned IBM ic (6196488) or another component is partially dead. Maybe the canned IBM ic's from your later version have heatsinks for a reason...

Also not being able to identify the pinout of any chip on the video board, (apart from some TLL logic gates and the video RAM) doesn't precisely help to investigate the problem.

Sorry for the delay. I took apart the DA-15 and took pictures. Here they are below. 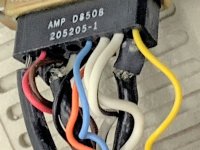 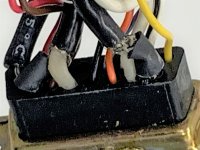 The 8 pin side from left to right:

Let me know if this is works and I'll put my DA-15 back together. I hope this helps.

Wow! Thanks a lot, it will be very useful. We have the same number of cables available so no crossed cables, and the colors are also the same. In your schema this would be the DA-15 pin assignments by pin number:
I see I had my preliminar pin assignments mostly right, the new info is that yellow that is (I think) an input, is grounded in the monitor, and that now I know the right order for black and orange that I had correctly (?) assigned to HSYNC/VSYNC without knowing the order. Blue and brown go unconnected on my monitor (as well as in yours) as the pins are physically missing. Maybe they are used optionally to detect other types of monitors or features. I didn't have right co-ax 1 lead position though, I will have to review that because it is weird that co-ax 1 lead is connected to the monitor and co-ax 1 ground isn't... Maybe co-ax 1 lead is hsync after all... and orange is another thing.

The good news is that I know I won't blow up my monitor when I connect it, and that I know what cable have to be grounded (yellow) and ignored (blue & brown)

The bad news is that I already tested the terminal grounding the yellow cable and that didn't improve the video output.

Now I have to recap and replace some components from my monitor's v-sync circuit that came totally fried. Then I'll test the terminal with this pinout and see if it comes to life. 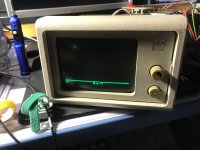 Still missing vsync at the output but in the worst case I know where to get it. Definitely the terminal detects the monitor somehow, apart from the grounded yellow cable, maybe it measures the current flowing on some pins or something.

Hi, have everything assembled back and thanks to @snuci pinout with a proper DA-15 monitor cable. I ended up including an external circuit that drives the VSYNC signal to the monitor directly from the CRTC chip. Even added a custom TMK converter to hook an AT/ PS2 keyboard to it: 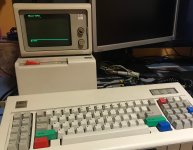 Still not perfect but I think I can consider that it is functional again.