Could LISP run on an XT machine? If is is there a compiler that would support LISP on XT type machine?
W

A popular free system back in the day was XLISP (today it's known as XLISP-STAT), but it was completely usable.

You may have trouble finding one from back in that era though, many have taken it up and improved it.
K

The shareware collection linked below has downloads for both XLISP and PC-LISP. Hopefully, one might interest you.

This one was recently released: 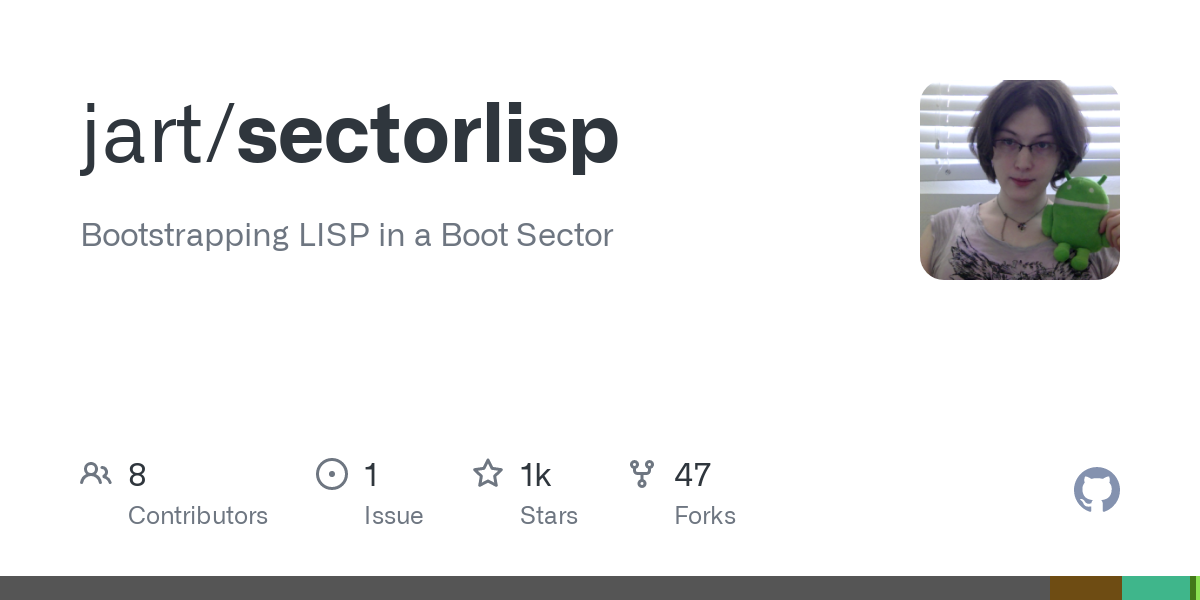 Bootstrapping LISP in a Boot Sector. Contribute to jart/sectorlisp development by creating an account on GitHub.

Not only does it run on i8086, but it fits in a boot sector. Apparently it's a full implementation.
G

I had a copy of Golden Common Lisp from Gold Hill Computers on a floppy disk only IBM PC 5150 system back around 1984 when that was first released. I walked over to their office in the Technology Square area and paid cash (which was a lot of $ at the time) for a boxed copy, which if I remember correctly they were not quite set up to handle that transaction from their office. I wish kept that boxed copy and still had it now.
W

VileR said:
Not only does it run on i8086, but it fits in a boot sector. Apparently it's a full implementation.
Click to expand...

For assorted values of "Full".

Lisp is well know for having, like, what, 14? base forms from which everything else could be built. Sector Lisp is like that kind of Lisp, just the most fundamental primitives.
J

There was also MuLisp from the Software Warehouse, which had many versions starting in the CP/M days and was the same codebase as their MuSimp/MuMath symbolic math packages.

MuLisp is a bit of a nonstandard Lisp (Like "implied Cond", which would assume you meant a Cond in certain situations.) Or, if you learned it first like me, you'd find all other Lisps weird. Later versions included scripts that would read more standard versions like InterLisp or XLisp.

MuLisp 83 was for generic MS-DOS, and has smaller memory requirements. It included a script for cursor movement specific for the IBM PC, but also had other scripts for non-IBM terminals. By the time of MuLisp 87, it was specific for the PC including its CGA graphics and could use more memory. Versions from various years have floated around: I've seen MuLisp 83, 84, 85, and 87.

Trivia: the weirdest place it ended up was on the 6502-based Apple II! While the CP/M version of MuMath ran on the SoftCard, they later came out with a native 6502 version. But they made it by writing a 8088 emulator in 6502 assembly that would at least partially emulate the code they wrote for MS-DOS!
W

jrd said:
But they made it by writing a 8088 emulator in 6502 assembly that would at least partially emulate the code they wrote for MS-DOS!
Click to expand...

I mean, how is that worse than any of the other successful P-Code interpreters of the day, save that 8088 isn't particularly high level but, hey, why not.

Wow, I didn’t think there was as much interest in LISP now a days. Thanks to the authors for getting back to me regarding this language. I just received the Practical Common LISP book. What seemed to trigger my interest in LISP was the old program of Computer Chronicles in 1984 where John McCarthy made a brief appearance addressing AI development using LISP. I had heard of LISP before I saw McCarthy’s view on the program. I didn’t know if it worked with XT machines. Thanks for the insights to compilers for LISP. Also, the Internet Archive listing was way cool. Thanks for that link.
L

Yeah, in the 80s, you really needed a Lisp Machine or similar to do serious work with Lisp (especially Common Lisp). That changed quickly... Symbolics went bancrupt. Here is my Symbolics 3645 machine ~1998, by when it was already obsolete since 15 years or so I was doing Common Lisp with Windows 3.1 / Linux and Allegro Common Lisp (Franz' ACL) ~1996 on a 486-DX2 80, but not much earlier. Before that, it was a pain. There also was DR SCHEME for DOS which was very popular, and I used this ~1993.

alejack12001 said:
Wow, I didn’t think there was as much interest in LISP now a days.
Click to expand...

There's actually a lot of interest in Lisp today. I can't say more or less than in the past, but probably more, simply because there are more folks in the field (percentage wise the numbers may not be that different, but absolute numbers I'm sure is higher).

I used Harlequins LispWorks in the mid 90's on the PC, I was using Scheme earlier than that on Unix boxes.

My first CGI programming was in Scheme, running reports on the Unix box (which produced ASCII files) and presenting them as PDFs.
L

I used Harlequins LispWorks in the mid 90's on the PC, I was using Scheme earlier than that on Unix boxes.
Click to expand...