I used to have Amiga's but at the end I sold them. But I'm still interested in programming a 68000 or 68008 in a small scale. So I looked for a nice SBC. But the only reasonable looking one was this 68008 one. And yet I have a small complaint: it uses a PIC to emulate the ROM. A CPU, ROM, RAM, UART and TTL-glu would fine. No CPLD/FPGA but wouldn't mind a GAL.

Any pointers are welcome. Thank you in advance!
J

I can offer you a Philips OM5040, which is a Eurocard sized development system with the Philips 68070....

There's this available on eBay, or direct from the maker: 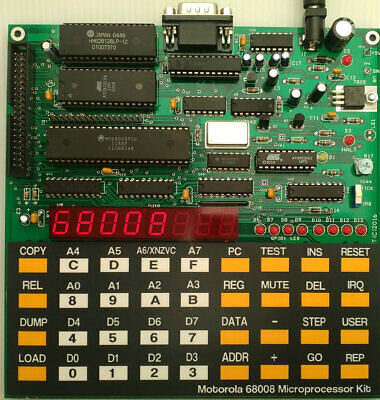 I have found that the DECServer 200/MC has a 68000 CPU inside (with EPROMs in sockets). It has local RAM and plenty of serial ports. No disk interface though - but you could use a serial port to interface to a serial server.

I have been able to find the technical information online at http://www.vaxhaven.com/images/2/2e/EK-D200C-IN-001.pdf. I also found the schematics when I went hunting at one point. EDIT: here http://www.bitsavers.org/pdf/dec/et..._DECServer_200_Engineering_Drawings_Oct87.pdf.

I was wondering myself whether this would make a nice little SBC...

EDIT: Found the memory map on one of the schematic pages: 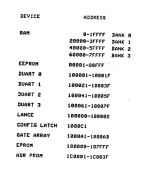 The only thing that is worrying me is the GATE ARRAY area...

I might bring one home and have a play with it next time I am in work...

I have plenty of these units to give away (for a suitable donation to charity).

jdreesen said:
I can offer you a Philips OM5040, which is a Eurocard sized development system with the Philips 68070....
Click to expand...

Zeer interessant / very interesting! You have my email address

smp said:
There's this available on eBay, or direct from the maker:

Thank you for your tip! It was mentioned on other sites but the given URL did not exist. Seeing your link I was a bit skeptical but then I noticed that the given URLs were different.
I'll first have a chat with Jos and then I'll decide what to do.

One of the things on my long to-do list is to make a Sega Genesis dev board of some sort. The edge connector is 62 pins, so you can use an old ISA bus slot for it.

smp said:
There's this available on eBay, or direct from the maker:

First: Jos will send one of his devices including documentation.

Reading the documentation I ran into something I disliked: a software UART. Why not an hardware one? Then I rather go for this one: 68K-MBC.
E


BYTE review of the MECB

Thank you for the info. It seems no one available now but I'm not in a hurry.

If you're not worried about being compatible with any other particular computer out there, I have a 68k board that I designed some time ago.

It uses a handful of standard logic gates and 3x GALs. The board is about the same size as an A5 sheet of paper.

I've also been working on a GCC based "tool chain of sorts" to allow me to compile C, and I've built a simple serial based loader (using a python script) so that you don't have to keep popping ROMs to run the next iteration of your code.

Im in the UK so if you were interested I have a couple of spare boards.

Edit: The first expansion board I built for it has an RTC, battery backed RAM, Intel 8254 timers, and a watchdog timer, and have PCBs for this as well.

I started building a VGA card (prototype only) that uses a 128MC CPLD and which does work (provides 80x25 text mode 16 fg/8 bg colours), and had intended to start building an Ethernet card, but stopped there because unfortunately my board doesn't support anything else being the bus master and the Ethernet controller I was intending to use needs to become bus master to send/receive packets.

I've been considering a new design, but this board is still useful.
Last edited: Dec 12, 2022

A couple of pictures of the two PCBs.