Making LDOS 5.3.1 disks from images for the Model I

After successfully making bootable disks for my Model 4 earlier today, I've turned my attention to making a set of bootable LDOS disks from the images at the Tim Mann Misosys site.

My first attempt failed. Every image when being written had errors under Imagedisk.

I had made blank DMK images under SDLTRS and backed up the contents of the JV1 images to them. That didn't work.

So... I decided to replicate what worked this morning.

I also made a double density master, while I was at it.

I'll bring the images over to my 5150 and try writing them later tonight.

So, stay tuned for the results.
A

I'll sleep on it, and try again later.
A

I gave up trying to do it the hard way. I wrestled the 5150 off my kitchen table and set up a 486 motherboard a friend sent.

As it turns out, the 16 bit IDE/FDC controller card I had supports single density disks.

After loading up a hard drive with DOS 3.3, Imagedisk, and several DOS based emulators, I made the LDOS disk directly to a floppy drive. It booted from the floppy in the emulator, so all is well.

Later today I'll figure out how to copy the two CPM diskettes from the Lo-Tech IDE adapter for the TRS-80 to SSDD 40 track disks and make Imagedisk images of them.

Not every Model 4 has double sided drives, and even less Model IIIs have them, unless the owner added them.
A

In case this helps anyone. 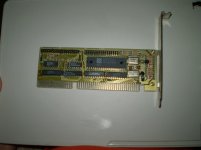