Memory board in my NEC v20 does it make sense?

Iam buying busy with an XT clone computer..
It have to following parts.

But does it make sense to put an memory ISA 8 bit card in this system?

Robin4 said:
But does it make sense to put an memory ISA 8 bit card in this system?
Click to expand...

You could add a card that provides expanded memory.
Explained at http://en.wikipedia.org/wiki/Expanded_memory

It is only of benefit if you have programs that can use expanded memory.
R

Does some games making benefit of it?

I do not know.

What we need is a list of programs that are known to use expanded memory. I had a quick look on the Internet but could not find such a list. Does anyone have one?

I know wing commander would make use of it... that's all I'm aware of though.

PC Geos can make use of EMS memory. You can select to use it in its Preferences utility. 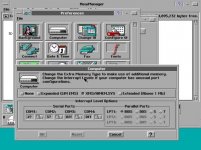 Don't understand changing the VGA card to an EGA as the VGA card is backwards compatible software wise and will work with a wider variety of monitors.
Last edited: Dec 28, 2011
R

actually i havent seen a VGA on a XT computer that time ago when the XTs where in..

But iam not really sure to change it.. Iam looking for a monitor on flimarkets, but i find nothing at all, then i could buy an converter board / system to convert EGA to and VGA screen..

Most CGA, and EGA games should run fine using a vga card. Certainly did when I was using one my 286 a few decades ago. It just seems right to me somehow all with the other goodies you have fitted in the box

At the end of the day though it's really up you of course. Seems like you're having a lot of fun with it.

I don't recall a single game written for EGA that won't work on VGA. There are some games that were written for CGA and had compatibility issues with VGA (e.g. the original Digger). Perhaps these games will work on EGA because it has a real 6845 chip (if you're getting the original full size EGA card, and not some EGA clone). But there are lots of nice VGA games (created around 1990) that will work just fine on an Turbo XT. Most of them allow selecting display type, so if you feel that VGA slows you down, you can select EGA or CGA. Also some Trident VGA cards allow switching to CGA-compatible mode (for example refer to this thread: http://vogons.zetafleet.com/viewtopic.php?t=28983).
The display selection for VGA is a major thing. You can connect VGA to almost any modern flat panel TV or a display, for EGA you will need either to find an EGA compatible display or some converter box which probably won't give you EGA-like picture anyway.

Of course it's all a matter of personal preference. But to me it's either the all original hardware (e.g. IBM PC/XT 5160 with the original CGA) or "the best you can get with an XT-class machine" (a Turbo-XT loaded with whatever you can fit in, like VGA, Ethernet, EMS card, Sound Blaster, CD-ROM drive, 3.5" floppy). It looks like you're trying to build the latter.
T

If you're running an XT, even one with an NEC V20, there's very little that you'll really be able to run (in my mind, not official testing) that you would WANT to run on that machine, that would make use of EMS memory. The only thing you could do that I think would be rather useful with the expanded memory card is to use part of it to create a RAM-DRIVE. You could then load the command.com to that location, and set the COMSPEC parameter so that it will load from there. It's been so long that I don't really remember, but I had a KayPro PC-10... actually, I still have it, but it's in a box and I haven't turned it on in like almost a decade. It's in my parents storage unit in Florida... hah. But in any case, it had 768k of ram (my parents paid like an extra grand for that back in the mid 80s). It had a full 640k base memory, and then an extra 128k expanded memory. Nothing I ever played was able to use it, but the KayPro came with some VRAM.SYS system file or something that would create a RAM-DRIVE, and I remember loading command.com on there. I did something with COMSPEC (or something?) that allowed me to re-direct the location of where COMMAND.COM was loaded from. It didn't speed up boot times, of course, because it still had to load from the old Seagate ST-225 RLL/MFM drive the first time. It only sped things up when I would exit computer games, or things like UNISON menu manager, or Word Perfect 5.1... then it would quickly re-load the command.com and get me back to DOS quicker. Other than that, there's really nothing that you would really want to play on that machine that would use it. I mean, you certainly could NOT run Wing Commander on an XT. I remember running Wing Commander (with Speech enabled) on a 386 SX-16, 1 meg of ram, and a Sound Blaster 2.0 and it was horrendously slow.

The XT is better suited for some of those older games, like Ace of Aces, Sub Battle Simulator, 1, 2, and 3 of the various Sierra games like Kings Quest and Space Quest... etc...

The good thing with the Turbo feature (so you can run at 4.77) is better for the older games like PENGO, BABY3, PTROOPER.EXE, and REDBARON.EXE... awesome games... hah.


As far as the VGA vs EGA thing... if you're having issues with games displaying on your VGA card, it's probably because the DRAM on your video card is messed up. You should be able to keep that 8-bit VGA card in there and run anything you want to run. Back in the mid 80s, after my parents had dropped 5 grand on a new Kay Pro, they then blew another $2,500 bucks (times were good back then for them, hah), on a Logitech VGA Monitor (seriously, .49 pitch, with 800x600 resolution), and a Genoa Systems, Super VGA graphics card that had 512k of memory on it. It was TOP OF THE LINE back then.

It had a 9-pin graphics port on it (Monochrome, CGA, EGA) and a 15-pin VGA port on it. Although we couldn't use both at the same time (the graphics card wouldn't know which one to use and would default to VGA), I never had any problems running a CGA or EGA game on the VGA card, while it was hooked up to the VGA monitor through the VGA port. The only thing I couldn't do was play games in Herculese Monochrome mode, because Herculese Monochrome would use something hi-def like 700x400 or some crazy resolution... it only worked through the HERC / CGA / EGA port on a HERC monitor (mine is Green / Black).

The only games that require EMS to run also require a 386 or later, so adding EMS to your system for the purpose of better gaming would not help you.
E

Trixter said:
The only games that require EMS to run also require a 386 or later, so adding EMS to your system for the purpose of better gaming would not help you.
Click to expand...

That doesn't make sense to me. Why would a game that requires a 386 (for DPMI presumably) also have a need to page flip ram and require EMS when it has access to linear XMS?

I seem to recall there being a class of games that were Real Mode DOS binaries that could benefit from EMS (IE, they did *not* use a DOS extender) but were too slow to run on anything less than a fast 286 or 386, so I guess you could sort of argue they "required" a 386 from a practical standpoint. (EMS boards were not *that* common even in 286s so I imagine the first time a lot of people encountered EMS was in the form of 80386 emulating it.) Off the top of my head I can't name an example, but...

Exactly...protected-mode games weren't common until the 486 era. There were a lot of games that required 386+ and EMS, but the only 386 features they used were 32-bit registers (if that). They just needed the 386 or 486 speed. Examples off the top of my head: