My collection in NorCal

IBM 3270 PC AT/GX - This is a monster only IBM could build. The monitor has a warning label noting that it weighs 35 Kilos (77 lbs)! The base unit also weighs in at about 50 lbs. This unit was supplied to a company I worked for as a loaner, then the company that loaned to us said they didn't want it back. My boss told me to get it out of there, so I did. The system was OEM'd by Valid Logic Systems. In addition to the 19" 1024x1024 monitor, it has the 3270 AT base unit, the Display Attachment unit, and the massive 24 function key 3270 kb. In order to run the Valid Logic software, the system has an Opus card with a NS32016 processor so it can boot ATT SYS V Unix and run Valid GED. This system took the trifecta at the 2000 VCF, best in class (post 1981), best presentation, and best of show. I brought it back up just recently. It has 2 MFM hard drives (20/80MB), and a 5.25" floppy. The tons of manuals (IBM + ATT + Valid) are what got me best presentation for completeness. At the VCF, I was drawing logic schematics on screen and printing copies for people. Some specs: 5373 System unit, 5378 Display Attachment Unit, 5279 type C (color) monitor, Model F-122 kyb. The MB appears to be the same as a 5170 Type 1, but with a unique BIOS. In fact, all 4 of the ROM sockets near the rams are populated. The APA display card connects to the 5378 DAU with a 62 way connector! I'll probably start a thread with pictures and a tour of this thing. It also has Ethernet, and a serial-parallel card. Some of the cards in this thing run HOT! I'm thinking of getting a slot fan for it.

I kept several PC clones as "mules" to support the above dinosaur. A MB with some ISA slots and some PCI slots, and a CDROM makes cloning old hard drives easier. In fact, all the parts for the 3270 AT/GX are collectively referred to as "dinosaur bones". :D

Micron Tower Server - I don't have the model number, but this is a tower case almost twice as high as a standard desktop (upright) case. It has 2 Pentium Pro cpus in it. Horribly slow machine! I put Debian Linux on it, just for self-torture. I may scrap this one.

IBM Thinkpad A31p - This is the famous "three-spindle" engineering laptop with 1600x1200 IPS display. At one point, it had a dual boot setup with XP and Linux, but now it's just XP. Still works. It's a P4M, I believe. I replaced the MB at one point, as it had the dreaded Ati solder ball disease. I also replaced the LCD backlight, an operation not for the faint of heart.

IBM Thinkpad X41 - This is a "Frankenpad" with a X41T MB in a plain X41 case. The original X41 MB was dead, and all the replacements available were actually X41T tablet MBs. I may have put Zorin Linux on this one. Still works.

BTS PC AT clone - 12Mhz 286, 16MB Ram, 20MB MFM HDD, monochrome. DOS 3.1. I recently brought this one back up too. The tiny monochrome monitor is a very irritating orange color.

Ohio Scientific C2-OEM - This is not the triple-CPU model they made (C3), this only has the 6502 processor. No hard drive, just dual 8" floppies. I ported the Adventure game onto this. It does not do graphics, only text IO to a dumb terminal. I have the original manuals and disks, as well as system disks I have patched and added programs to. I believe this has 48K Ram. I wrote a printer driver overlay for the OS so it could talk to a NEC Spinwriter. This is also a rather heavy system.

Synertek Systems Sym-1 - I used to work at Synertek, so I got one of these cheap. I made a case for it that also has the Synertek KTM2-80 kb-terminal board. It also has an EPROM programmer for 2716 type Eproms, which the system can use.

Apple Macintosh G3 "blue and white" - This is an early G3 with what they called the "heartbreak" MB. It supports IDE hard drives, but above a certain size, it fails to read the drive. I added a generic IDE controller to it, which is the usual fix for this problem. I only got this so my daughter could learn Mac stuff before college.

Toshiba T3200 - One working, one for parts. Somebody gave me this one. After I got the complete system, lo and behold, within a few weeks, I stumbled into one at a local surplus store that was for parts only. I needed some of those parts!

Signetics Instructor 50 - This was supposed to be a teaching aid for programmers to popularize the Signetics line of CPUs. The strategy didn't work. I was given this as a gift.

Unfortunately, in the last few years, I seem to have scrapped several P-III and P-150 systems that are now desirable as hosts for old games. I also have some old games I may offer for sale here.
M

Some pics of the big IBM dinosaur... 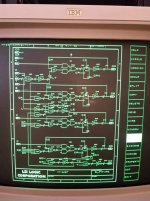 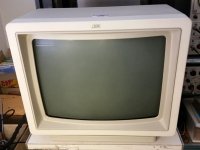 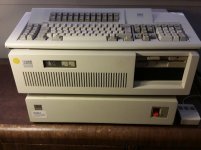