I've come into possession of a NEC Powermate SX (not the Plus version) which is described as a "8/16Mhz" system. It has a 16Mhz 386SX on a little expansion card that plugs into the motherboard, along with a socket for a 387.

However I cannot get the chip to rate past 8Mhz. All the documentation I've been able to find does not suggest that the CPU's speed is physically set via switches or jumpers. Stason labels one jumper as "ATCLK clock mode select", but neither jumper position makes any difference on the CPU's speed. A technical document on ps-2.kev009 relabels that jumper as "sync/async mode", which isn't a much better explanation.

I do have the setup/diagnostic disk for the system, but it's limited to date/time, drive settings, and setting memory amounts. Nothing to do with the CPU at all.

I posted a similar question about the original NEC Powermate APC regarding a 286 at 8Mhz that seemed to be able to go to 10Mhz, but never got a reply on that one. It appears the NEC systems were not very popular I suppose, though I'm still hoping someone has some insight into this baffling problem.
S

What are you using to 'rate' the CPU's speed?
R

I'm using CheckIt. It's never failed me before.
H

Some boards also used key combos like Ctrl+<something> to change the speed.
S

Usually it's Ctrl + and Ctrl - to toggle the speed where the + and - are the ones on the numerical keypad.

Have you looked at the CMOS settings? Some boards have a setting there to set the bootup board speed.
R

I hadn't thought of using the Ctrl keys to manage the CPU speed. I'll try that tonight and post a picture of the motherboard as well.

That would explain the "10Mhz" LED on the original NEC Powermate though. Correct key toggle = LED on. I am properly chagrined.

raifield said:
I do have the setup/diagnostic disk for the system, but it's limited to date/time, drive settings, and setting memory amounts. Nothing to do with the CPU at all.
Click to expand...

Quick question - is it an actual NEC program, or just a generic AT setup program like GSETUP?
Does the Powermate 386SX not have a built in setup program - Ctrl+Alt+S or Ctrl+Alt+Ins? (I don't have a Powermate 386, so no idea, just throwing out some things to try)
R

SpidersWeb said:
Quick question - is it an actual NEC program, or just a generic AT setup program like GSETUP?
Does the Powermate 386SX not have a built in setup program - Ctrl+Alt+S or Ctrl+Alt+Ins? (I don't have a Powermate 386, so no idea, just throwing out some things to try)
Click to expand...

The documentation I found states that it does via Ctrl+Alt+S, but pressing that does nothing either during boot or after it. The setup program is NEC's diagnostic/setup software for the Powermate SX, not a generic program.

Like an idiot, I was hammering Ctrl+Alt+Plus, figuring that would trigger the higher speed. Plus key, increase, it made sense to me. That didn't work, so out of frustration I hit the minus key instead.

That works. Ctrl+Alt+Minus toggles the speed between 8 and 16 on the Powermate SX and I'll update the post I made last month about the Powermate 1, as that key combination will likely switch the 286 from 8 to 10.

Thanks! Why they didn't make the Plus key do anything, we'll never know...
S

raifield said:
Thanks! Why they didn't make the Plus key do anything, we'll never know...
Click to expand...

I've actually found quite a few machines where minus was speed a toggle.
Which is odd because back then I always remember + and - being up and down.

Here is the CMOS setup program for the NEC PowerMate SX/16. I am not sure if it will work with other models.

I too have received a PowerMate SX/16. CMOS will not save settings so I suspect DALLAS battery is dead, in which case HDD cannot be configured. It has Seagate ST-1102A 89MB HDD. However, I am seeking proprietary RAM expansion board for this model. I expect it is difficult to find, much like the PS/1 RAM modules.

Depends on what model PS/1 you are talking about....
F

If you don't have NEC's proprietary RAM expansion board, then you can use an ISA card to add extra RAM, albeit with a performance penalty of going through the ISA bus.
N

vwestlife said:
Here is the CMOS setup program for the NEC PowerMate SX/16. I am not sure if it will work with other models.

Resurrecting a very old post, but haven't found this information anywhere else. The specified link is long gone, but does anyone have the CMOS setup program for the NEC PowerMate SX/16? System works fine at the moment, but want to be prepared when the inevitable happens.

Also, I haven't had any luck getting the built-in mouse port to work. I did set the mobo switch to enable the mouse input, and I'm using a standard Microsoft 2-button PS/2 mouse. Mouse input is simply ignored. (And yes, I've verified it's a working mouse on another system.)
N

Never mind on the mouse question. Finally realized I was using was the Logitech mouse driver. Switched to Microsoft Mouse driver, and Microsoft mouse works fine in the built-in port. (Duh!)

Yay! Now I can play games like this on the NEC: 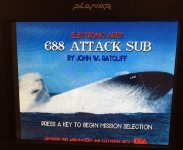 Do still need to find the CMOS setup disks, though. If anyone has them archived away or can point me to them is greatly appreciated.

normanator said:
The specified link is long gone, but does anyone have the CMOS setup program for the NEC PowerMate SX/16?
Click to expand...

Awesome! Every time I think I've seen everything on minuszerodegrees.net, there's still another door I haven't opened.

I might need one for an SX Plus. so far as I know, the BIOS may or may not be the same. I'll be trying out the one for the SX/16 later on with the Plus and report back.
it doesn't seem like the floppy drive in mine works, nor the IDE card, since the Plus doesn't have one inbuilt. the one it came with is a JPN CA8390, and according to Stason, the jumper settings are correct. I just replaced all th 16v 22uF caps on it so I'll see if that fixes it up.