I got this Osborne Vixen in a pile of Kaypro stuff , Was really hoping it was working but, this was all i got .

So i tore it all down and got out the scope and started looking around.

There are some schematics on archive.org but i believe there are for the prototype.

Chip numbers and pins used are different on this production unit.

But the basic design is the same .

Found out the 7406 in A7 was bad video going in and nothing coming out.

Once i replaced it .

Video looked great now just need to make a boot disk and see how it all works .

Also disassembled some of the bios and there are some IO routines in the 0xF0-0xFF range
and they are not internal to the Vixen so as a guess it would be for the Hard Drive .

Congrats! Thanks for posting this. I have a Vixen that is very similar to this. I get the start up beep but the video is like your "before" photo. I don't have a scope but if I can find a 7406, I'll give it a shot.
C

Should have mentioned since the 7406 is a open collector part you can just piggy back them as a test to see if it works .
So you don't have to remove the chip and solder a new one in to test it .
ken
C

Finally got around to making a boot disk, looks like she works
And after using it for a bit seems like a very nice cp/m machine . 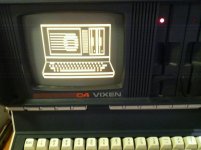 Not only did you fix your vixen but you fixed mine too. It was the exact same IC that had messed up my video. Thank you! Now I just need to make the boot floppies to check screen alignment and close her up.

I've spent most of the day trying to get two questionable 5 1/4" floppy drives to work with no luck. Now I remember the frustration of working with PCs when you bought them a part at a time.

Anyway, thanks again and good luck on your auction.
C

That's great seems to be a fault in the design there .
Its a really nice computer good size and all .
that's why i put it at a high start price so if it don't sell i will keep it .
If you cant get a drive to work PM me your address and i can send you a copy of the disk set.
ken
B

I wonder if that affects the other clone of that system (Zenith .. um lol.. Z-171? (google.. woohoo! guessed right) and I thought there was one other also that used that same case/system but can't think of it right now. Ah ok, The Morrow Pivot.

barythrin said:
I wonder if that affects the other clone of that system (Zenith .. um lol.. Z-171? (google.. woohoo! guessed right) and I thought there was one other also that used that same case/system but can't think of it right now. Ah ok, The Morrow Pivot.
Click to expand...

Things do start getting hazy in the Osborne chronology so I just want to make a correction on your post. I don't believe the Osborne Vixen has a clone and it was made by Osborne. There also aren't too many around and actually is "rare".

Now I need to look for an Osborne Encore (Osborne 3) to fill in the set. <sarcastic>Thanks for that</sarcastic>
M

Hi All;
I some years ago had an Osborne one or two can't remember which..
And so I never heard of a Vixen, Can You post a Picture of the whole machine, for comparison sake with what a one or two looked like ??
Of course I never heard of anything past the one or two.. I thought that was all they made..
THANK YOU Marty

Here are some links for you:

Here is the Osborne 3 (Encore)
http://www.old-computers.com/museum/computer.asp?st=1&c=122
B

Thanks for the correction. I always forget about the 4 Osbornes and confuse the 3rd

Quick update from me:

I was able to make the Osborne Vixen disks finally. I spent a few hours wondering why these disks wouldn't work and recreating them over and over again. Tried to clean the drive heads manually but no luck. I then tried to line up the floppy hole with the hole in the media and determined that the drive wasn't spinning even though it sounded like it was doing something. I finally opened the floppy drives up and inspected drive A carefully and found a screw missing. When you put the floppy in twist the drive handle, there was a screw missing in the knuckle that would push down and clamp down the top head assembly. Once that was going, it worked like a charm.

It is a great machine.

You originally asked for comparisons. Sorry for the delay but I finally took some pics with some comparisons 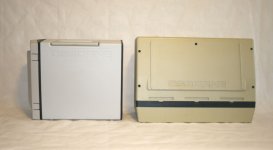 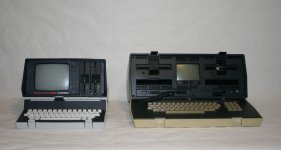 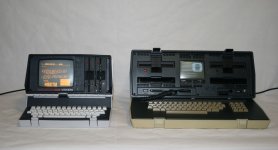 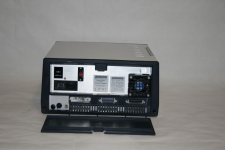