zippysticks said:
So I bought this non working Pericom terminal which won't power up (shorted smoothing capacitors and burned out bridge rectifier) and also has a pretty 'terminal' case of screen 'cataracts'.

Have the rectifier and capacitors on order so decided to tackle the screen problem. This is caused by the ageing of the 'glue' that bonds a layer of protective glass to the CRT. It becomes opaque and starts to bubble - usually around the edges. 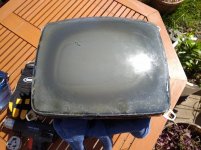 I have safety goggles and gloves for the job - I don't want the tube shattering and blowing glass to my face or to burn myself on the hot tube.
The tube had been sitting outside on a hot sunny day and was already hot to touch after an hour.
After scraping the exposed glue from the outer edge the heat gun was applied working around the edges towards the centre. 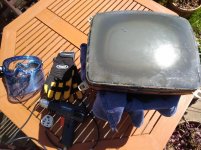 As the glue melts, I start to slide in wedges between the glass layers.
You can see the pattern of glue melting and lifting towards the centre of the CRT. 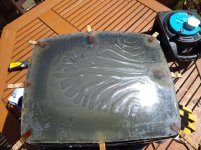 Eventually it lifts off quite easily leaving behind quite a thick layer of rubbery glue residue that easily scrapes off the tube. 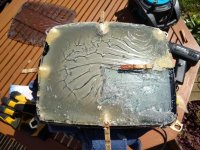 Its all done quite quickly < 30 minutes in my case.

But I then spent another hour cleaning off the residue from both the CRT and the glass protection layer.

Looks like new when finished and the protector put back in place. 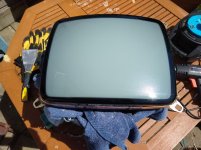 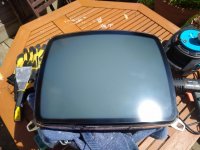