Is there any way to prevent the Hardcard from locking up (like any way of ensuring that it moves off the plate properly), or do I just have to deal with opening the machine every time I want to turn it on?
S

Sounds like stiction. There may be some preventative measures you can take. Do a search.
R

Thanks! I'm relatively sure it is stiction, but I couldn't find any ways of solving it other than banging it when it doesn't work. My question is, are there any ways of preventing it otherwise and is it normal for the Hardcard to experience stiction more as time goes on (after I hit it, it used to work for a relatively long time - now it's only one day).

It's definitely stiction, and this is a common problem with them. I don't know of a way to fix it; once mine start doing that, I make a backup at the next available opportunity and then replace them with XT-IDEs, and the hardcards go into the donation pile.
N

My repair experience may make people feel uncomfortable but I'd say, if you are 100% sure that its stiction and you are going to trash it, then it doesn't hurt to give it a shot (in other words, you have nothing to lose). What I did to a head stiction 20MB hard drive was open it up, slip a Q-tip between the two read/write arms (depending on the number of read/write heads, you may need more or fewer Q-tips. The purpose is to avoid the magnetic head getting stuck together - it will be very hard to separate them once they stick. Once you have the proper gap between two heads, you can then extremely carefully remove the platters. After that, the heads are clear and you can use q-tips to very gently clean the heads - be sure not to use too much force - doing so may cause alignment issues. Once all heads are cleaned, use compressed air to blow the chamber as well as the platters. Reinstall the platters and remove the q-tips. Blow the platters again before you close up the hard drive. I have repaired three 20MB MFM HDD's (low density disks are less sensitive to dust) using this method and they all have been working fine since early last year.

Disclaimer: Do it on your own risk! Only do it if you have already decided to trash the hard drive. 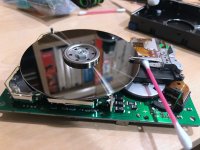 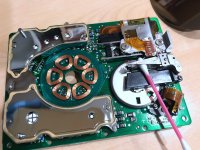 Try giving it some runtime ... let the hard drive run for a few hours. I find they improve after running for a while if the bearings have been sitting for a long time. Exercise the heads with a tool like Checkit's hard drive test.
R

Thank you all! This actually made me wonder if, perhaps, the issue actually wasn't stiction (that's what I assumed when I got the machine, but I never considered other options. Now, I think it might be something else: when the computer is booting (even when it throws a 1701), the hard drive feels like it's spinning. Does anyone know what else might cause the drive to work intermittently?
S

Check here to see if there are any familiar sounds coming from the drive:

It’s the head actuator assembly sticking due to a failed rubber bumper.

Check this video out:

I thought I had seen a thread a way while back talking about drives in hardcards, talking about some of these having some kind of rubber stop inside of them that degraded causing the arms (not the heads) to stick. In that case, I think they would spin up.

Different drives have different reasons for sticking. I had disassembled a bad hard drive a few years ago that was experiencing heads sticking to the platters, (even when they were unstuck there were piles of errors, so it was toast), It looked to me like these platters were supposed to have a very thin layer of lubricant on them. And this somehow was supposed to keep the heads from sticking. It looked like the areas near the hot motor had dried up, but there was still some on the further top platters, and the top heads did not stick as much. Some research shows some very early hard drives were described as using a ~10nm thick layer of the lubricants "krytox" or "fomblin". I have no idea if this was true of the drive I was looking at (20mb 3.5" MFM interface drive). I recall I did try cleaning the heads similar what was described above with no noticeable improvement.
You must log in or register to reply here.
Share:
Facebook Twitter Reddit Pinterest Tumblr WhatsApp Email Share Link
Top