I just picked up an old PC similar to my childhood computer. Nostalgia is really hitting me right now, and I wan't to play with some of the programs I used as a kid on the real deal. I even ordered an old IBM monitor like the one I used to have to complete the experience!

I am taking a programming class next semester at college, and I thought it would be a lot of fun to write my code on it. I used to write games in Qbasic when I was younger. Still, I can't say I have much technical knowledge on these, especially when it came to the hardware.

Anyways, it will boot to DOS 6.22 with a floppy. When powering on it gives me the 161 and 163 codes. If I press F1 it will proceed to boot, but only via floppy. I tried the reference disk, no luck. Just does it's thing and wants to restart. I even ordered another ESDI 30MB HD off of ebay (paid more for it then I would a full TB drive!) and it acts the same way. Hrm.

I can boot to DOS. Fdisk says something to the effect of "No fixed disks present" or something similar. Starting without a floppy boots to.....BASIC.

I have not attempted to replace the Dallas DS1287 ship yet. I read a tutorial about hacking them to work.

My question is, will this prevent booting from the HD?

Thanks! I am really excited to get this best going.
K

krebizfan said:
If you don't have a working battery, the configuration will not be saved and the system will not be able to find a hard disk. No guarantee that if you replace the battery that either drive or controller is still in working order. I expect a very good chance of the drive and controller working but you won't be able to find out unless the battery is replaced.
Click to expand...

Cool, thanks! I guess that is what I wanted to hear. Will it loose configuration even if you do not turn the power off when you reboot? ie. CTRL-ALT-DEL after a ref disk?
D

The DS1287 in it will either be socketed or soldered to the board. Lets hope it is socketed. DS1287s are relatively cheap to find.
Since you say the reference disk restarts the computer after saving the settings and still won't boot, that indicated that the settings aren't saved after a warm restart. You could justify this by running FDISK after it restarts and see if it finds a present HDD. I can check this on my PS/2 later.
G

Crane550, I can help you quite a lot as you had the same error as my 65SX did . I managed to get everything in my 66sx going bar the second HDD, I still have to figure out how to do that. The first thing I did was to remove the Dallas clock chip and file away the pins of the clock chip (www.mcamafia.de/mcapage0/dsrework.htm) . Then, you can either replace it with a coin cell battery or, as I did, attach wire to the terminals and run the wire down to the speaker where there is no chance of damage if the battery leaks.
I used 2 AA batteries because I had no new 3v coin cell's. Once that is fixed, use your reference disk. You will need to configure it. You can auto configure the computer but I always went and did it manually. Now, the primary difference between your system and mine is that mine has SCSI and yours has ESDI. ESDI is still quite a bit like a MFM in the sense that still quite a bit of the processing was done on the card. ESDI had more drive intergrated processing than MFM or RLL. (correct me if I'm wrong, i know lots about MFM/RLL but very little about ESDI as I have never owned computer that has it). To answer question in short, yes, it will prevent the hard drive from booting. You will lose the configuration even if the computer is not turned off. Fdisk will still say no fixed disks present even if you have the drive working and C: is noticed. What I had to do was format the drive using th format command and then boot from DOS and install DOS onto the drive.
J

You may find some help in this thread from a year and a half ago:

I ran into the same problem with my 55sx - thought the hard drive was dead. In my case, it turned out that the battery was just dead enough to garble the CMOS memory. Once I cleared it and re-ran the reference disk, it recognized the drive and things acted much more normal. Not sure how this will work if you still have a dead battery.
C

Thanks a ton for your help, fellas! I actually found that Dallas chip site generic486 recommended yesterday. I figured, "what the heck?" so I tried it. Works perfect! I still get a 163 error when I boot, despite trying to set the date and time. Other then that it going strong. Just installed Turbo C 2.0 and am trying my hand at some coding. 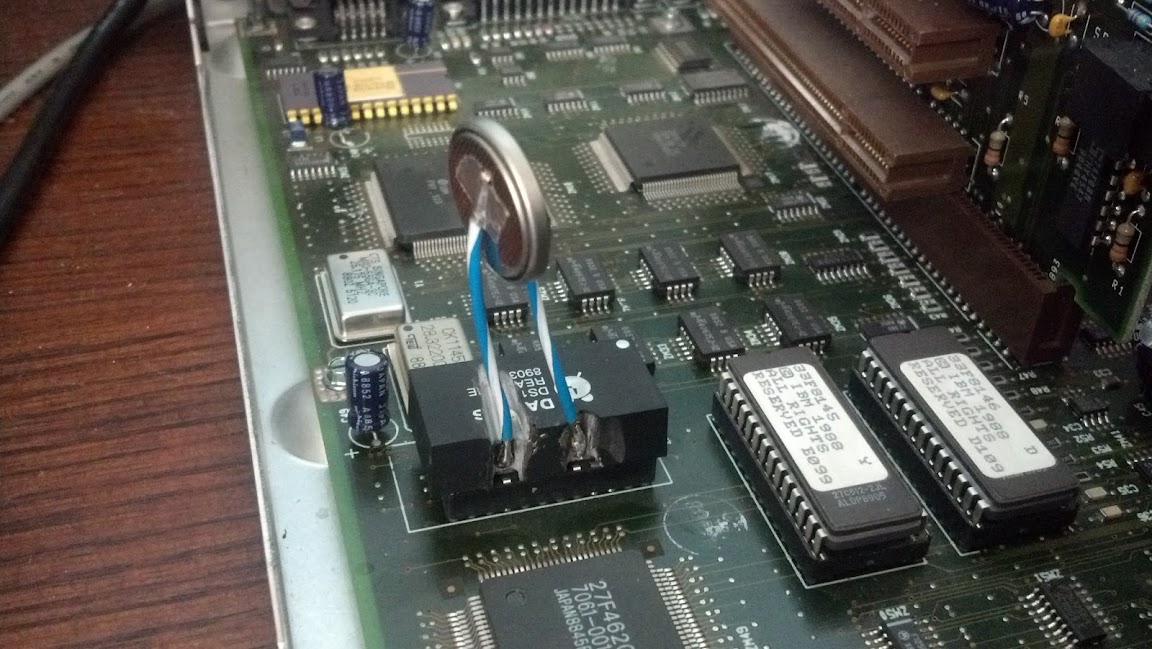 LOL. I've done a similar mod to the 386DX board I had as my 1st PC, but I didn't make it as good-looking as yours. My Dallas was unremovable and had plenty of items right beside the mod area.
Like some said, the Dallas was a pretty bad idea, but at least, it didn't leak.
D

Well done on the rework! I have done the rework on several Dallas chips. One was with a Dremel and that sheared both of the pins off. The better way was to use an Exacto blade to chip at the plastic and work your way down to the pins. Even then, yours is much cleaner than mine was. It was a challenge when I did the rework on a Compaq SLT laptop, especially keeping the blade from breaking any board traces.

Your PS/2 will still work fine with the 163 error. My Compaq Portable III still displays a similar date/time error code on startup, even after many times I've set the time. I don't know why it won't keep the time, but it's the drive settings that really count.
You must log in or register to reply here.
Share:
Facebook Twitter Reddit Pinterest Tumblr WhatsApp Email Share Link
Top