To put this simply, I have two Nintendo Wii consoles hooked up to one TV. I do not want each system to have it's own IR sensor bar. I also don't want a wireless sensor that takes batteries. I also don't want another wall wart for using external power.

The cable from the Wii to the IR sensor bar does not provide any sort of data, it's only a power connector providing 7.5V,
What I would like to do is buy a couple of these Wii Sensor bar extension cables, and hack them into a splitter, so I can plug the cable into both Wii's and into one sensor bar.

Now if I had both Wii consoles on, I assume that would be very bad since they would both be outputting 7.5v into the extension cable. So to prevent that, would a diode be required on each cable that plugs into the Wii, so no power goes back into the system? If so, which diode would be needed? Would these 1N5817 20V 1Amp Schottky diodes be ok? 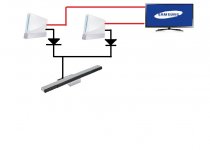