I was recently given a rather bruised and battered C128DCR, which was missing its floppy drive. It also came with a 1571 drive. After restoring the C128, I decided to transfer the drive mechanism from the 1571 into the C128DCR, to make a complete unit.

Unfortunately the drive didn't work. It didn't take me long to find out about the Newtronics D502 drives and their notoriously bad heads. Sure enough, the drive in my 1571 had open circuit heads. After reading numerous blog and forum posts, I decided that trying to find a replacement drive is probably not a good idea given how unreliable they are. So I decided to try hacking a different drive to make it suitable for the C128 and 1571.

I'm pleased to say I have been successful, and my C128 now has a functional drive.

The drive I used was a Chinon FZ-502. The reason why I chose it was simple. I have two spare ones, so I can easily modify the second one for my 1571.

The modification is reasonably straightforward. I removed the old connectors and wires from the Newtronics D502 and connected them to the appropriate places on the stepper motor, spindle motor drive board, and R/W heads. If there is interest in this modification, I'll document it and post it here.

The only problems I had was that the latch was in a different place compared to the original. I had to fill the original hole in the C128 front panel, and drill a new one. My front panel was already full of holes which I had to patch and paint anyway, so it wasn't really a problem for me. Additionally, part of a metal plate on the front of the drive had to be cut away as if fouled the back of the front panel. 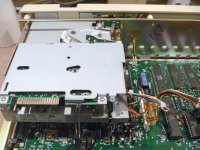 I think this would be a great post to explain in greater detail. The 128DCR is my favourite Commodore 8-bit as a "daily driver" (other Commodores are neat, but it's the model I use most).
A

Here are the details of the modification for using a Chinon FZ-502 floppy drive in a C128-DCR. Should also work in a 1571 drive.

Disconnect and remove the interface PCB. Keep it as it will be needed later.

On the new floppy drive, cut the existing plug off the five stepper motor wires.

On the old floppy drive, cut the six wires to the stepper motor, leaving sufficient length of wires attached to CN15, so that when joined to the new stepper motor, they will reach the motherboard connector.

Remove the 4-way ribbon cable on the motor PCB from the new drive. Note that the wire with the blue stripe corresponds to pin 1, the other wires are in sequence. 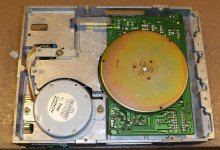 Remove the 3 wires leading to CN17 from the motor PCB on the old drive. Make sure they are long enough to reach from CN17 to the appropriate places on the new PCB.

The new PCB requires +5V, which was not supplied to the old PCB. This can be obtained from the motherboard. In my case I used pin 6 on CN14, by adding a pin and wire to the previously vacant spot on the connector and soldering it to pad #3 on the motor PCB. 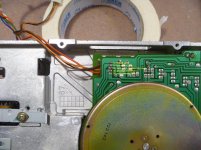 While both drives use exactly the same track 0 sensor, they were wired in reverse to each other, so you will need to replace the sensor from the new drive with the one taken from the old drive. 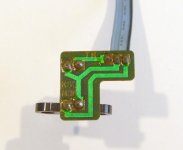 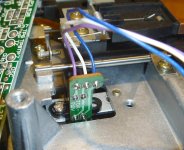 Check to make sure the sensor is wired as shown in the above picture, and as listed below:
CN14 pin 8 (purple) to LED anode
CN14 pin 9 (white) common (LED cathode & sensor)
CN14 pin 10 (blue) sensor

Remove original ribbon type wires and replace with wires from CN14 as shown below. Also remove the drive activity LED. 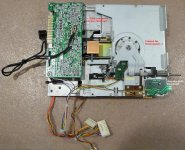 This should be self explanatory, but also note the disk presence sensor on the new drive is not used and has been removed as shown. Also note the gap cut into the flange on the metal plate at the front of the drive to avoid fouling the plastic drive fascia.

The interface board from the new drive contains two special connectors for the small ribbon cables for the heads. These need to be isolated from the rest of the (now redundant) circuitry on the PCB. This can be achieved by cutting the tracks to the terminals, or by removing two components, which was the method I chose.

Remove D1, on the solder side, next to the two terminals.
Remove the Sony CX20185 IC from the component side of the PCB.
I also removed the Molex power connector to provide a clear place to provide strain relief for the new head leads. This can be seen in the picture above in the Index & write protect sensors section.

Connect the head leads taken from the old drive as shown below: 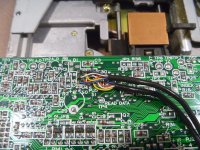 The wires from PJ4 go to the even numbered pins on the motherboard connector (on the top) and PJ5 goes to the odd numbered pins (on the bottom).
Reattach the head ribbon cables into the two sockets on the underside of the interface board and reinstall the board back into its original location.

As previously mentioned, the front flange will need to be cut away to prevent fouling of the rear of the front fascia.
The drive latch is in a different position, requiring the existing hole on the front fascia to be filled and a new one drilled.
The drive is a very tight fit in the bay in my C128DCR. I had to slightly file away the raised areas on the sides where the mounting holes are. Fortunately the metal is very soft.
As I had to remove and replace the track 0 sensor, I had to do a full alignment of the drive, including track 0 sensor position.

I understand the early model 1541s also used the same mechanism as the 1571, though with only one head. These seem to have exactly the same problems with bad heads. While I don't have any of those older 1541s, I would expect that this drive would work just as well in a 1541. Of course the upper head would not be used.
Last edited: Dec 8, 2021
You must log in or register to reply here.
Share:
Facebook Twitter Reddit Pinterest Tumblr WhatsApp Email Share Link
Top