Hi!
I just found and joined this group to help in the restoration of my Altair 8800. Actually, it may be an overstatement to say restoration. I built this machine in 1975 on the 8 month plan that MITS had at the time. $68.50 a month for 8 months got you an Altair kit with a 8080 CPU card and a 1K static memory card.
Over the years I learned a heck of a lot about computers and microprocessors because of that computer and enjoyed a very good engineering career partly because of it. My plan now is to get it up and running again and then sell it to someone that will use it. Along the way, I enhanced my Altair with a beefed up power supply (forget what company sold it), and the Processor Technology motherboard with real buss termination to keep SWR down. Over the years I had CP/M and MP/M running. I also have 11 S-100 boards for the Altair ranging from the Cromemco Z80 card (at a blistering 4MHz!), to a A/D and D/A board, multiple memory boards, and I/O. I've just started to inventory what I have. Also a pile of 8" floppy disks I also started going through the documentation I have. Lots of memories there!
A previous thread gave some pointers for getting a system that has been dormant up and running again safely. I am familiar with most of them as I collect vintage Collins Ham gear and have re-capped a few of those to replace some of the older capacitors. My plan is to photograph every step and post it here if folks are interested. This is probably going to take a while so don't expect daily updates. I also travel a lot in my job so my 'play' time with the Altair has to compete with other activities.
I have 2 8" disk drives that are interfaced to the Altair using the California Computer system interface card. I wrote the bios for my Altair and enhanced and improved it over the years. I hope I can get the M80 assembler up and running also. Funny how this all starts coming back to you after 20+ years of inactivity!
The scary part is that I still remember some of the hex opcodes for the Z80!
Questions are welcomed, and I hope to have pictures of the current state of the Altair posted soon if there is any interest.
Mike
B

Best of luck with the restoration Mike.
I'll follow your progress with interest. I recently acquired an IMSAI 8080 and hope to go through a similar progress to bring it back to life.
B

Welcome to the forums, Mike! What a great project to have ;-) There are quite a few S-100 system owners here and probably a few more who would drool over (well next to, since we wouldn't want to short it out) an Altair. Certainly feel free to hang out and post your updates or ask any questions for the folks who may have done similar work already.

Great job keeping it. Very impressive to have a system that you bought for that long.
F

Mike8800 said:
Hi!
I just found and joined this group to help in the restoration of my Altair 8800.
Click to expand...

Wow Mike! What a great first post. I'm not into S-100 beyond dreaming about running Wordstar on an IMSAI and Lear Seigler terminal but I am going to subscribe to this thread in the hopes that you will post all further messages about the resoration in this thread for us to read. You definitely sound like somebody I could learn from (not that it takes much

Now when you get finished, write a program to make the Altair do PSK-31, hi hi!

Thanks for the encouragement! I've been reading the documentation I have and it's all coming back to me. I noticed a switch and a wire from the AC side of the power supply going to one of the boards and remembered it was a way to get a 60hz signal to the system for a real time clock. I must have done that when I got MP/M running. I think this weekend I'll start cleaning up the computer and getting the accumulated crud out of it. Like I said initially, the Altair and its two disk drives were sitting in an old computer cabinet for a long time in the basement (finished and humidity controlled). A friend has offered to loan me a Variac to bring the system up. I should have that next weekend. This weekend I'm planning on cleaning and documenting the condition of the system. I'll take before and after pictures and try to post them up here by the end of the weekend (Aug 13/14). Regarding Wordstar - I've got it on this system and I used it as my program editor. I still remember the sequences (ctrl-d, ctrl-f, etc.) to move the cursor around. Since I no longer have the H-19 as a terminal, I'll have to see if Hyperterm on an XP laptop will do the job. I could spend WAY TOO much time on this project at the expense of other projects!

That switch and the traces going to it got me zapped a couple of times! Since the traces run on the back side of the front panel PCB, you could get zinged even while changing cards. Some people disconnected the wires to the switch and mounted a replacement on the rear panel.

From a safety (both component and operator) standpoint, it was probably preferable to run the signal from the secondary of one of the power transformers.
F

Mike8800 said:
Since I no longer have the H-19 as a terminal, I'll have to see if Hyperterm on an XP laptop will do the job. I could spend WAY TOO much time on this project at the expense of other projects!


Since the sellers on ebay seem to think the unworking terminals they are selling are gold plated, or maybe platinum plated, I think that is a good idea. But I saw a youtube video that had a reproduction of an Altair and the person cut and pasted a BASIC program into the terminal window of a modern PC and waited while it "typed" the program into the Altair's memory. You know, I am not certain that it was a copy of the Altair design, I just know that it had the address and memory contents LEDs on the front panel. He was going to start selling them but I can't find the video anymore. But it's possible that a USB to serial adaptor could work.

You could post a wanted ad for a terminal in the appropriate forum here. The prices tend to be reasonable.

Floppies_only said:
I saw a youtube video that had a reproduction of an Altair and the person cut and pasted a BASIC program into the terminal window of a modern PC and waited while it "typed" the program into the Altair's memory. You know, I am not certain that it was a copy of the Altair design, I just know that it had the address and memory contents LEDs on the front panel. He was going to start selling them but I can't find the video anymore. But it's possible that a USB to serial adaptor could work.
Click to expand...

Is it this? http://www.brielcomputers.com/wordpress/?cat=11
M

Started moving things around to make room for the work area. There were 4 boards not in the system that I took photos of. The rest of the boards and cleaning will start pretty soon. In the meantime I'm posting pictures showing the current state of the Altair. It's just like I took it out of the cabinet, I haven't started to clean it up yet. Enjoy the pictures.
Mike 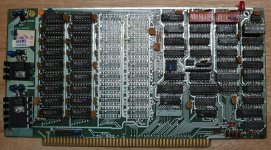 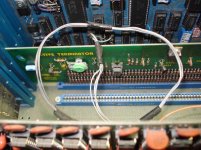 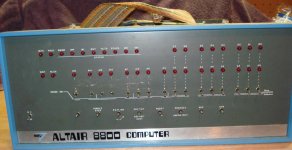 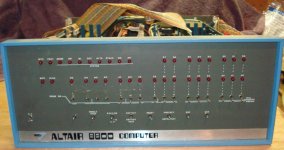 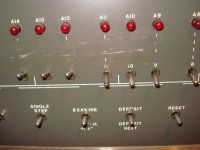 Ah, I see I can only post 5 pictures per post. So here's some more and also below... 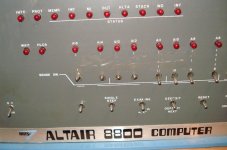 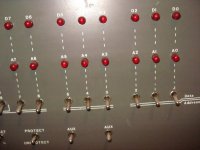 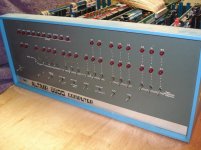 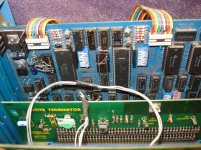 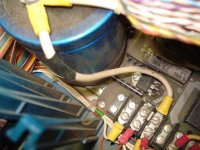 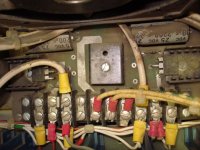 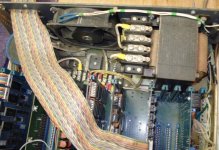 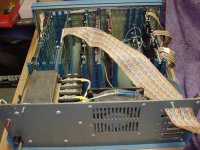 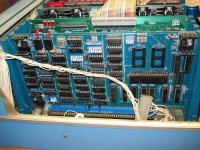 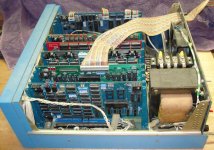 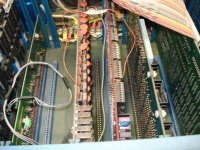 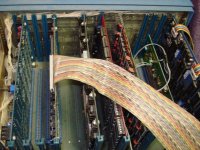 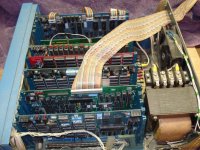 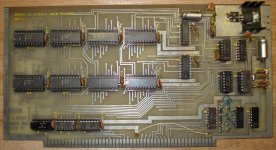 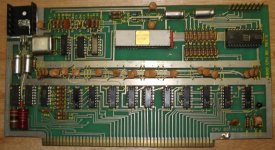 You're doing an awesome job! I wish I'd started out building a computer rather than buying it finished. BTW I enjoy building my own PC's and modded a Tandy 1000 SL with a VGA card and a V30.
M

You are SO corect! More than once I got zapped getting the RTC to work. Fond memories?
M

Briel terminal board looks very interesting. Anyone comment on them?
Thanks, Mike
M

IT'S ALIVE!! The Altair has been cleaned up, brought up on a Variac to condition the caps and it works. Just have the original MITS 8080 board and 1k static RAM boards in along with the Godbout active terminator board.
Toggled in C3 00 00 (jumop to address 0) and it's happily looping along. Some pix: 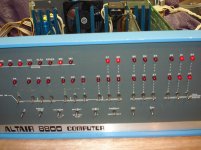 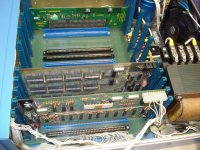 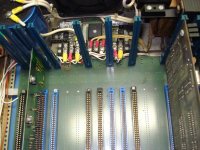 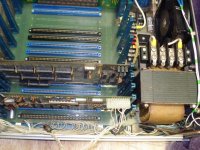 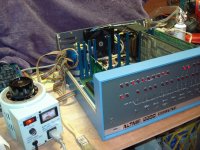 Now that the basic machine is operating I'm going to get a terminal working with it. I'll try the Briel board first. Once I get a terminal up and running I'll get the other boards in the machine and try to boot the 8" floppies I have. That should be entertaining. Don't even know if that will work at this point as the disks are so old. Now to get some I/O working.....

The disks themselves will probably be just fine. I see 30-year old 8 inch disks quite frequently and it's pretty surprising how reliable they are.
L

I felt the same when I got my first Imsai up and running.
M

Anyone know much about the SSM CB-2 Z80 CPU board? there are a ton of jumper options on the board. I have the docs, but am having trouble getting the board to respond to the reset from the front panel of the Altir. The MITS 8080 CPU board works fine and I can examine and deposit to all of my memory cards. I can't do that with the Z80 card. I wrote down all of the settings on the CB-2 card before I started to play with it. It should come right up and work OK as that is the CPU that was in the Altair when I tarted this exercise. I had put a toggle switch on the (not) MEMW line on the buss, apparently to allow me to switch between the MITS CPU and the CB-2 and still use the front panel with the MITS CPU.
Thanks, Mike
You must log in or register to reply here.
Share:
Facebook Twitter Reddit Pinterest Tumblr WhatsApp Email Share Link
Top