Hello,
I'm in the process of fixing a Model 1 which has a bad character ROM. It's only slightly bad - most of the characters look fine, except some have a single dot which I don't think should be there. I was able to read in the character ROM and re-render all the characters as an image, which showed the problem.
Any source for the contents of the original M1 character ROM? I'll probably use one of the eproms I have around with a socket adapter to make it work. Thanks.
Image of the bad ROM's character set attached. You can see the problem in the space, ", (, f characters, among others. 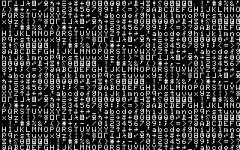 Alternatively I suppose I can manually edit out all the dots in the bitmap and import that back into the right byte layout for the character ROM. But would be nice to just use the original contents.

I think that version of the character generator is in the MAME ROM set for the Model 1, but I’ll say that with a grain of salt since there are two versions of that one that are almost but not quite the same.

Another source that’s a little awkward but out there is the source code for SDLTRS has hex encoded versions of a bunch of different characters generators.

… this said, if you have any plans to add a lowercase mod while you’re fixing it you might want to use the later generator that has another copy of the alphabetic characters in positions 0-31 instead.
B

Thanks very much! Looks like it's in trs_chars.c in the stltrs code as you mentioned, I'll give it a look. Can tell if it's the correct version of what I have by making a diff image between the two, will see how that goes.
L

bitfitxer,
Yes, I've got the character ROMS, and decoded files of same. What is the Number on your Character ROM?
What is the Version of the ROM? Ver 1.1 or Ver 1.3? Ver 1.3 has a lot of upgrades that you really need,
versus Ver 1.1, which has Keyboard Bounce and Cassette Load Problem issues.

I simplified it this way which has served me well since the 80s.

If your character generator last for numbers are 6673 or 6674, then you do the Radio Shack lowercase mod, from the same book.

All other LC mods are complicated or unnecessary in this day and age, and in fact when I buy systems with other mods I undo
them and set them up as listed, above.

For the record:
3001 : early systems, lowercase but no descenders, and a flying 'a' due to Motorola manufacturing fault (so they sold these
chips cheap to RS who figured they didn't need LC anyway)
6670 : mid-production systems, same as above but with no flying 'a'
6673 : late systems, custom part made especially for the M1 for Radio Shack and included with most late 79 and 1980 machines.
By this time RS was selling the LC modification "kit" for $99 but if the computer already had the 6673 then the 1-min job
was to cut the trace, install the stacked 2102s into the already fitted socket, and solder two wires. It probably took
longer for the soldering iron to warm up than to make the mod.

It's an easy fix.

Looks like the "T" and "f" have an extra dot on each character. I didn't look at all of the other characters to see
what else was messed up.

Thanks very much, the operation was a success!
I was able to extract the good version of the same character rom from the SDLTRS source code, although it was flipped L-R and bit shifted with respect to what I had. So took care of that and wrote 2 copies of the rom onto a 28C16. Wired it up with a breadboard to verify things worked, I'll make a little pcb socket adapter for a real fix. Maybe add a jumper to select the original and lowercase version, since the rom has double the required address space.
Larry, I believe it is a V1.3 rom. 16k, L2 basic. There is also a problem with the ROM but ram is ok. I'm using my ROMulator z80 device to replace rom to make it work while debugging. Next up for this one is to check what's wrong with the rom, then I think repairs will be complete.
You must log in or register to reply here.
Share:
Facebook Twitter Reddit Pinterest Tumblr WhatsApp Email Share Link
Top