i have some strange problems with my DEC VT100-Terminal.

1st problem:
In Local-Mode, at some columns some characters were not correct displayed.
The first 3 columns are bad, then 6 are ok, then again 6 bad and so on.
Bad means, that another character instead of the typed character appears.
There is a "rule" for the bad characters: 0..9 -> 0, a..o -> ', p..z -> p, A->P -> @, P..Z ->P.
When typing in a "good" area, the character from the corresponding column 6 before will be overwritten by another "bad" character. This "new" bad character seems to be the lower 4 bits from the currently typed.
Example:

This repeats in exactly the same way for each row.

2nd problem:
in Column 75 and 76 are always bad characters displayed. (Ɨ and the FF-Sign)

If i fill the complete screen with E (ESC # 8) everything except col 75 and 76 seems to be OK.
(see attached foto)

so it would be great, if somebody has an idea whats the problem...

You have enough data here that you should be able to identify the problem with the use of the VT100 print set and technical manual, which are available on bitsavers. I have troubleshot similar problems before at least three times in VT100s.

Before we spend too much more time on this, do you have the skill to desolder the bad part when we find it and replace it? Do you have an oscilloscope and/or logic analyzer? Also, where (roughly) is your geographical location?

Desolder the bad part should be no problem. An Oscilloscope (Analog 20 MHz) is also available here. Logic analyzer not
My geographical is in southwest of germany.
What I do not want to do is just soldering arround without a good plan or strategy... so this is why i m asking here for some help

we (nikrom and I) already repaired some other minor defects in the PSU and monitor board - mostly caused by blown capacitors.

If absolutely necessary we might even build our own logic analyzer with some microcontrollers, but we rather do not want to go that
route. We clearly prefer to find the cause by studying the manual and circuit schemes...we just might need a little help
L

I wanted to make sure you were serious and had the needed tools to fix the problem. I hope you have the print set and techincal manual.

I am fairly sure that there is a problem with the line buffer ram that stores the four least significant bits (2111 at E17). I think this, because "bad" characters have the same most significant bits in common with the correct character, so the lower four bits must be messed up. The same character positions are always messed up, which points to the line buffer ram (which is used for every line.) See sheet BV5 of the print set for this logic.

Also, 2111s seem to be very unreliable parts. I have changed many of them in many things I have repaired.

So, change E17 and report back.

Yesterday night nikrom also suspected the problem somewhere around the
line buffers. He desoldered them and switched both of them around.
(if i remember correctly)

Not sure what the actual outcome was, he may get here shortly to report back.


best Regards and thank you for your help
Alex
N

For testing, i have interchaged E11 with E17 (lower + upper linebuffer).
In the bad columns, only the lower 4 bits of a typed char appear. (special signs -> see 4-78 in manual)

When typing in good area, the chars in the bad area before are overwritten, mostly with the original typed characters.

The both completely defect columns are still at pos 75 + 76, the displayed chars there an different (p and inverse displaey p)

Maybe you can give me a hint, where i can get those ancient RAM-Modules like 2111A or 2114 compatibles.

Thanks a lot
best regards
R

I got a couple of ds12XX static rams. We might just need to mux the two CE lines (the ds only has one).

Hey, it may even work to replace 2 srams with 1 ds12XX chip and use one CE as additional adress line....we just need
to deal with the output enable line somehow

The behavior is as I suspected.

It occurred to me last night after I turned off the computer that I should have suggested that you swap E11 and E17. I am glad that you figured that out for yourself.

On this side of the pond, the best (hobbyist friendly) source for vintage parts is Jameco Electronics. They have 2111 in stock http://www.jameco.com/webapp/wcs/stores/servlet/Product_10001_10001_38931_-1. Buy now before the euro sinks further!!!

Your idea of substituting some other SRAM will work too. When I do such things, I make a little daughter board to adapt the pins.

Glad I could help you. I must have at least 100 hours of bench time and untold hours of desk time with the prints and technical manual on VT100s.
Lou
R

Good news! Nikrom replaced both chips with a single ds1230 (no additional logic needed since we discovered in the original circuit both chips were always enabled)
and viola, it worked flawless on the first try!

Maybe he will go a bit further in detail.


Our next patient is an old Decwriter III LA120 which does not play nicely. First observations show that there is good power
from the PSU, but the PSU does not send the startup signal. The Keyboard LEDs light up in a random pattern when power is
turned on.... but we may start another thread for this if it's okay
N

VT100 works as it should

VT100 works as it should

As RolemTM already posted, i ve replaced both line-buffer rams (2111) by a DS1320. Just soldered a little daughterboard and fixed in with a piece of plastic, a screw and some hotglue on VT100-board.
Just take a look ;D

Thanks a lot again !!

Congratulations on your repair. As for the LA120, I will not be so helpful since I have never worked on one, nor do I have one. Hopefully one of the other guys here can help.... 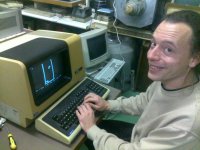 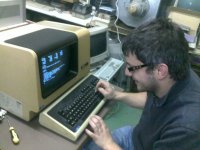 From the looks of your lab, you guys must either be grad students or research engnineers. Man I wish I was doing that again.....

What is that tetris game running on (pdp-11?)

We both have our study finished since some years. But i do not mind if you make us younger than we are. hehe :D

My actual job is Linux and z/VM on System/Z, Nikrom is working as a programmer / engineer for industrial machines
(sorry Nikrom hope i did not describe your job wrong ).

Actually the "lab" on the pictures is kind of an un-official computer museum in an unused bunker. Some people have
collected lots and lots of old hardware there, but mainly focused on old MACs and game consoles. In fact it is way too
much too even sight everything. So, since Nikrom and I discovered this wonderful playground (it is almost in our neighbourhood)
we have been there every week to get the more interesting stuff (everything that is not a console, pc or mac) working again.
From looking at the homepage you may notice that they were more
home-computer focused till now


The Tetris game is from the standard NetBSD installation that i installed on an old (ha, not SO old compared
to a pdp-11) decsystem.

RSX11M+, the monitor on the side is a standard Compaq VGA attached to an AlphaServer 1000A. But none the less
working on the VT100 gives such a nice feel, especially the smooth scrolling. And as a bonus, no need to scroll lock,
since 9600 baud are almost slow enough to read

They have a newer VT420 in the bunker with a missing keyboard. I have been writing a piece of microcontroller
software to get a standard PS/2 Keyboard working on it. If there is any interest i may release the source code
and schematics on this site, especially since i read that the LK402 Keyboard seems to be compatible with the LK201
this may prove useful to other DEC owners.

I checked out the website, and you have indeed found quite a fun "playground". I assume you have the Alpha machines running?

Your VT420 without keyboard reminds me that I have a German LK450. Unfortunately it is an LK450 (PS/2) and not an LK401. However, with your PS2 to LK201/401 converter, it would be useable! What microcontroller are you writing the converter for (not MCS51 by any chance?)

Hehe, would be quite weird to use a PS2 Dec Keyboard on a non-PS2 terminal. I still need to implement the actual scan code
converter. By now it only reads PS2 scancodes and gets them out 1:1

The code runs on a Microchip PIC device. One of the many available mc familys today. I like them because the development
environment is free for ASM and C and you can get the actual hardware as free samples


For the AlphaServer 1000A i had a slight problem that day since i erased the nvram and had no ecu config diskette available... the rest
of the (mips)decstations, decsystems and alphas is running. There are also some sparcs around , we might adopt them too. When everything is
working we will look after the more exotic systems... I may take some photos tonight when i try out my keyboard converter and show off
our just recently arrived toy - a 12 channel oscilloscope :D

I also spotted a box where there was something written with PDP-11 on it if i remember correctly. There was a board in it and some tapes. Man,
i wish the system for this was still around. May take a pic of it also tonight.


Edit: been reading the keyboard documentation. Is it only coincidence that the actual LK201 Keyboard contains a 8051?, or why did you ask?
Last edited: Nov 17, 2011
L

Please do look inside the PDP-11 box and let us know what you find. Long lost software or print sets could be lurking anywhere!

It may not purely be coincidence that the LK201 uses an 8051 and that I like using 8051s. I have used 8051s since I was a teenager (twenty some years ago) and because I am stuck in a vintage computing time warp I still prefer them. However, I do have an MSP430 evaluation kit waiting for me to play with. I have been told that it will feel very much like the pdp-11, which is why I sprang for the $4.30USD and bought that kit.

i managed to take some photos of the mystery PDP box. Maybe we will find the Computer somewhere in the bunker too.
Please see the photos here and bear with me if some are unsharp. On the
little camera they all looked nice.