Last October, I traded Herb Johnson for two TDL SMB boards that had been stripped of all socketed parts, and even some of the soldered-down ones! Here's my writeup on the repair process:

Both boards had an etch error that shorted the +5V rail to ground! This is presumably why they ended up in the TDL boneyard. Herb had acquired them stripped of all parts from a former TDL employee, presumably someone plugged it in, noticed the power draw, and moved on to the next board. I found the short by stripping one board of its sockets and bisecting the +5V rail with trace cuts. The short was hidden under silkscreen, making it invisible.

In the process, I did two things that will probably be useful to other people here: I designed a replacement board for the SEMI 4804 SRAMs, which are unobtainium, and I reproduced the Interface One and Interface 2 I/O breakout boards. All will be available through my Tindie store as I get time to photograph and list them, but if you're in need of them now, send me an email!

The writeup also covers the cuts and jumps necessary to use 2716 EPROMs instead of the mask ROM that TDL originally supplied with the SMB. There are pictures of my modifications, with the cut areas circled for clarity.
E

Nice writeup. I have a TDL SMB2 board that I haven't had the chance to work on. It's quite a bit different in layout to the SMB board, with space for four 2114's (two present) and two 2708's (one present) plus a ZAPPLE mask ROM. No documentation, though...

I think Herb Johnson has documentation on the SMB2. If not, I'm pretty sure I do. I've got a few of them, some marked TDL, some marked CDL. They are definitely completely different!
M

I have two of these famous boards and have a writeup here:-

I saw an advertisement once in Byte for a SMB-II but I was told it was never sold commercially. Do you have one. If so would be great to add a picture and manual to the above web page.
PS. There was an earlier and later schematic for the original SMB but the actual board was unchanged.

monahan_z said:
I have two of these famous boards and have a writeup here:-

You may wish to link to my writeup w.r.t. the SEMI 4804 RAM adapters, as far as I know, there's no other currently available solution, other than cutting the board up.


monahan_z said:
I saw an advertisement once in Byte for a SMB-II but I was told it was never sold commercially. Do you have one. If so would be great to add a picture and manual to the above web page.
Click to expand...

I have...several. I'll get you some pictures. Would you like pre-production, production, or later CDL labeled production?
M

Probably the later production ones. A picture would be great. Do you have a manual/schematic. Was the board ever actually sold to the public?
Was Roger Amidon involved in its layout etc.
Whit the above I will further extend the info on the above SMB page -- for posterity!

Photo of the SMB2 board I have: 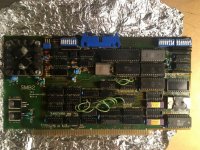