I have been working on this project for over a year now. The hardest part was finding a Cardinal SNAPplus video capture/overlay card complete in box. Luckily I found two variations of the hardware bundle and this allowed me to archive all the drivers, manuals and software that came with this product. This archive also contains detailed photographs I shot documenting different aspects of the hardware. Once again, thanks to modem7 of vcfed.org for converting my scans to PDF format and submitting the archive to minuszerodegrees.net.

Thanks for cataloging this. Most people don't appreciate conservancy in tech.

I had never heard of the card before now. Almost like an ISA video toaster. Very cool indeed.

eeguru said:
Thanks for cataloging this. Most people don't appreciate conservancy in tech.

I had never heard of the card before now. Almost like an ISA video toaster. Very cool indeed.
Click to expand...

Thanks. I used this card extensively back in 1993-1994 for titling and graphics overlay work. I called it the poor man's Video Toaster because it did not have the features or versatility the Video Toaster enjoyed, but it was an easy, cheaper all-in-one solution if you already had a PC on your desk. When I purchased it in 1993 it was selling for a whopping $1200, but for what the card offered it was worth every penny to someone like me who needed slick titling and graphics overlaid on top of video and was MUCH cheaper than starting from scratch with a NewTek Video Toaster setup.

It did have some flaws that held it back from becoming more popular. Besides being fairly expensive the video card portion, a Tseng Labs ET4000AX chip, was using only 8-bit so this card was not going to win any benchmark awards in gaming or graphics design apps of the time. Where it did shine was the video capture/pass-through portion of the card used 16-bit offloading the video capture/pass-through capabilities from the CPU of your system to the SNAPplus's elaborate chipset. So all your overlay graphics such as titling and animations were processed by your computer's CPU and all the incoming video and outgoing video from your source and target VCRs was handled by the card exclusively. This allowed me to do video overlay work on a measly Tandy 2500 SX 386 SX/25 class machine with only 8MB of RAM and a 80ish MB hard drive. Very innovative for the time to say the least and why this card was so pricey. The money was in the elaborate chipset on the card.

The other powerful feature of this card was the included MS-DOS software from the now defunct Lakeland, FL company Mathematica, Inc. called Tempra. Although it was not included in later revisions of the Cardinal SNAPplus hardware/software bundle earlier bundles included a Cardinal exclusive "special edition" version of Tempra GIF (a watered down version of Tempra Pro) and Tempra Show. Tempra GIF and the flagship product Tempra Pro were powerful paint/video capture software that worked with various video capture cards of the time and Tempra Show was multimedia authoring software that allowed the user to overlay graphics and titling on top of video streaming through the video capture card. Tempra Show also offered kiosk style interactive capabilities as well. The two pieces of software could work together for a complete software suite solution all in a MS-DOS GUI environment. It truly was advanced MS-DOS software. Mathematica, Inc. also had their flagship product called Tempra Pro, which you could buy separately and was somewhere in the ballpark of $500-$600. It was full versions of Tempra Pro and Tempra Show, but the included Cardinal SNAPplus "special version" had many of the features of their flagship product so I never found I needed to buy that full product release of Tempra. Unfortunately Tempra Pro and Show never made it to Windows, to my knowledge, and the company went belly up.

They did have a Windows product towards the end called Tempra Access Plus, but I have no experience with it. Luckily I was able to obtain a rare sealed copy of Tempra Access Plus recently on Ebay and plan to explore the software to see what it was. I have a feeling this was their breakthrough product into Windows right before the company went to the software rainbow bridge. I never knew it even existed until I saw the sealed copy on Ebay a few weeks ago. So this is very interesting to me from a historical perspective.

Well, I am done rambling, but I found Cardinal Technologies, Inc. and Mathematica, Inc. to be very innovative companies in the early 1990s and it's too bad they just didn't join forces and combine their talents to make a more cohesive hardware/software solution for PC based multimedia content creation as I think they had the right idea.

1.) In the BIOS revision 2.22 manual under the installation instructions it states not to change the SW1 dip switches from the factory settings with no explanation as to why or what they do. In the BIOS revision 2.20 manual it gives detailed instructions of what the SW1 dip switch settings do. Apparently SW1 was used if you had multiple Cardinal SNAPplus cards installed. Did Cardinal find the SW1 settings too troublesome and just gave up on that feature for their later revision card? It's a good possibility and a good question that Vcfed member modem7 asked when I submitted to him the 2.20 manual pages with the SW1 dip switch info for his -0˚ website. You can see the differences by looking at the two different installation instructions: 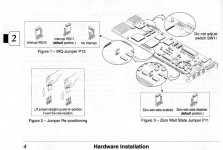 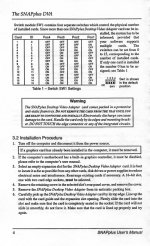 Another interesting find on the SNAPplus was when I benchmarked the card in DOS. According to this 1992 PC Magazine article the Cardinal SNAPplus's Tseng ET4000AX chip only used the 8-bit portion of the ISA slot, but then it goes on to state they would correct that in a later BIOS revision. As you can see from the results it actually does a bit better than a standard 16-bit VGA baseline. 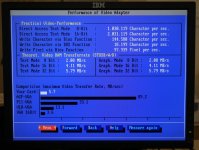 This photo just shows the sheer size of the card while installed in one of my Socket 5 motherboards during testing. 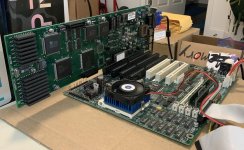 One last tidbit of info is all hardware reporting software will show the SNAPplus has only 1MB DRAM and that is correct for usable memory, but there is also 1MB of VRAM which is used for internal processes relating to its video capture/video overlay genlock features.
You must log in or register to reply here.
Share:
Facebook Twitter Reddit Pinterest Tumblr WhatsApp Email Share Link
Top