I bought a Timex 1000 back in the early 80's for $100. and it's companion 16K RAM module for another $50. My son 'frustratingly' worked with it, learning it's supposedly quick entry keywords and typing on it's less than useless keyboard. As if that wasn't painful enough, if you moved the Timex ever so slightly sometimes the RAM pack would glitch and you just lost all your programming! Next problem was trying to save programs to tape. More frustrations, and finally we threw in the towel. I returned it to the store and got my money back.
Years later, I acquired several Timex 1000's from different thrift stores. I only bought them for their historic value - nothing more. I never planned on using it for anything except to demonstrate that it actually was 'almost' a real computer. Well, down through the years they've thinned to 1 working unit and just lately even that one bit the dust.
So . . .
I'm wondering if a replacement is in order. Here's my thinking on the subject . . .

The Radio Shack TRS80 MC-10 was a direct competition for the massive selling ability of the Sinclair and Timex $99. computers. (Radio Shack wanted to cash in on this market.) Can't blame them there. The thing is, although I've never had an MC-10 it's starting to appeal to me more and more as a 'replacement' for that poor excuse for a tiny computer, the Timex 1000. It 'appears' to have several advantages over the Timex.

It has color. It has 'almost' a keyboard, certainly the chicklet keys are a vast improvement over the Timex membrane type. It has an on/off switch and a reset. The keyboard will 'probably' have less problems (over time), than the Timex. It has twice the onboard memory (4K vs 2K of the Timex), although only 3.142K is available for use in the MC-10. Both had RAM module expansions of 16K available.

Now, I realize that from a historic standpoint the Sinclair's in ZX80, ZX81, and even the Timex 1000 will always take the nod. I'm talking from a - "Hey, I'd actually like to use the thing once in a while" ability. Isn't the MC-10 more useable?
So, there you have it -

Please bear in mind the MC-10 was released as late as 1983. I found a review in UK magazine Your Computer from October 1983. By that time, the ZX-81 was pretty much an obsolete relic from the past. Surely it still had its users, but the remaining stock of computers was beginning to be greatly discounted.

I don't know exactly what the price range was like in USA in the second half of 1983, what $99 could buy you. I think you could get e.g. a VIC-20 for $89, so I think the MC-10 in that case should be compared to the aging Commodore home computer than a Timex Sinclair import.
T

Yes, when you are comparing models feature for feature and on price, it's important that they be ones which were released about the same time.

As my other posts would show, I'm not a great fan of the ZX-81 (Timex 1000) but when it came out it was "value for money". It also reveals the truth in the old saying "you get what you pay for".

Certainly the MC-10 is more usable - most computers are - but certainly the ZX81/Timex Sinclair 1000 has a boatload more software and product available. They also have far more active interest today than the MC-10.

I have several MC-10's with RAM expansion (as well as a ton of Sinclair/Timex stuff). Certainly the RAM expansion is more stable than that of the ZX81/1000 and it is easier to type on the hard, square keys (though one MC-10 I have always had sticky keys from when I got it, so your mileage may vary), plus you can simply type directly (no forced keyword nonsense). With all that said, neither is particularly pleasant, but if you're just going to use it for BASIC programming, then the MC-10 is a fine choice, as the whole setup is really just a subset of what's available on the Color Computer.
C

The Timex/Sinclair models are great for learning how to modify a computer.

An example: You can take a dead TI-99/4a's keyboard (the kind with the individual keyswitches) and rewire it to replace that awful broken membrane one. You can even mount the Timex inside the TI's case if you want or just build a separate keyboard case and use a ribbon cable. Just beware of RFI problems with that ribbon cable!

If I ever get time to finish mine I'll be hacking in some SRAM ICs directly on the motherboard. They'll get piggybacked on the ROM.

Whilst you're doing that you should also consider adding an MMC card interface Three TTL chips, a 3v3 regulator and some resistors.

Hi
I thought I'd mention that the RAM expansion could be made
reliable by putting some dielectric grease on the pins,
such as DC#4 or other automotive silicon grease.
I did this on mine and you could bounce the machine
on the table without any problems.
Dwight
Y

Might I ask, where in the world is the space bar on that Timex? Is it that blank key at the bottom right? Seems totally useless to me.

Incase anyone cares and I know you do...

Yzzerdd said:
Might I ask, where in the world is the space bar on that Timex? Is it that blank key at the bottom right? Seems totally useless to me.
Click to expand...

It's the key in the bottom right hand corner. The one next to it, which I think is the one you're referring to, is for comma and full stop.
V

Yzzerdd said:
Might I ask, where in the world is the space bar on that Timex? .... MC-10 is a definate "go" if you want a more useable Timex clone...
Click to expand...

Here are both keyboards close up -

Also, for those unfamilar with the Timex Sinclair 1000 - here's an online emulator 'in a window', to play around with.

In some respects it is unfair to compare the Timex with the MC10. As Anders pointed out in his post, the ZX81 was pretty outdated by 1983 when the MC10 was released. The Timex 1000 (released in the U.S. in 1982), was a 'close' clone to the ZX81. I think the MC10 was Radio Shacks attempt at the 'under $100.' market. They already had a Color Computer, released I believe, in 1981, and the MC10 was really just a chopped down CoCo. (Color Computer). If people weren't able to afford the CoCo, maybe this cheaper MC10, ($79. in 1983) would be affordable. The 'other' computer around at the time was the Timex Sinclair which was old technology with not even color. I think Radio Shack wanted some of that under $100. market at the time.
I bought a Commodore VIC20 in the fall of 1983 for the going price of $299. - so it wasn't really a comparison in the U.S. for either of these 'micro' sized, under $100. computers. The MC10 isn't very comparable to anything much in 1983. It was kind of in a class by itself, with nothing new to offer and it quickly bowed out a year later in 1984.
The Timex has a much more colorful history and a much better following - but I think it's still a poor excuse for a computer, although you can't deny it's compactness.
Here's it's motherboard -

To think this, closing on 30 years ago, was a complete computer is pretty amazing !
C

Hm. I have a source that says a TI-99/4A could be had for $99 in June 1983. Of course it was a desperate attempt by Texas Instruments to clear out the surplus. By the same time, the cheapest VIC-20 cost $89 so if you paid $299 you must've gotten quite some extra items or were mightly screwed. Perhaps you mean a C64 or you remember a price quote from 1981-82?

My oldest issue of COMPUTE! is from October 1983. Some actual price quotes, except those who wrote $CALL or something similar:

It is sadly true that below $100 you didn't have much of a choice: a TS-1000, a VIC-20 or TI-99/4A, perhaps an Atari 400 plus the Tandy MC-10 if it was available at that time and price. My question is how many prospective buyers would limit themselves to a $100 budget, in particular in a market where traditionally "premium is king", i.e. Americans are known to be willing to pay more to get a top product compared to Europeans who count every cent twice before spending it.
V

Thank you Anders. Once again I'm afraid I've slipped up, on dates. I'm off by a full year. I bought my VIC-20 in late summer or early fall of 1982, not 1983 as I stated. The going price was $299. and I paid an extra $65. on top of that for the cassette player/recorder made by Commodore. (I wish my memory for years was as good as my memory for amounts paid.) I always seem to be able to remember what I paid for an item
In Jan. of 1983, the price of the VIC-20 was slashed to $139. - - well, this is all documented on Wikipedia in the article "North American video game crash of 1983."
http://en.wikipedia.org/wiki/North_American_video_game_crash_of_1983
I bought my VIC-20 at the wrong time - I should have waited - but who would know the whole bottom of the industry was about to fall out, back then!
Hopefully, my memory serves me right on this next item. In 1984 I bought a Commodore 64 for $149. and retired the VIC-20. I was to spend the next, almost 10 years, with that Commodore 64.
C

Yes, that sounds more realistic. As you know, the Commodore 64 was launched in the fall of 1982 and already by the summer of 1983 some sources claimed the manufacturing costs were lower for the C64 than the VIC-20, so Commodore had quite some R&D margins to cut if they wanted to kill competition by lower prices.

Interesting that you note the video game crash of 1983/84. While the Tandy MC-10 clearly wasn't a gaming computer, it should somehow have been affected anyway. If it had been a portable with a LCD display like the latter TRS-80 Model 100, it would have played in a different league, something similar to the NewBrain AD or whatever it was called.
J

carlsson said:
Interesting that you note the video game crash of 1983/84. While the Tandy MC-10 clearly wasn't a gaming computer, it should somehow have been affected anyway.
Click to expand...

True it wasn't a gaming computer back then, but it has a really nice (and accurate) version of Pacman as of the mid-2000s and nice M/L Tetris and Pinball games. I have also been beavering away making basic programs and ports of as many of the great classic Basic games from various 8-bit systems of the time. Take a look at screen shots of them (I'm up to over 30 of them now):

There's a link to my blog at the top, where I talk about programming these games, and also zips containing the latest version of the emulator and the latest versions of all my games. The MC-10 is a great machine if you want to re-live the experience of the bare-bones computing of ZX-81 genera, but without some of the more annoying traits of that machine. I especially love the MC-10's clicky little chicklet keyboard. However, I develop all my Basic programs using Wordpad and the VMC Emulator by EMUCompboy. Ctrl-S in Word Pad and then you can just suck that text file straight into the emulator in a few seconds using the "quicktype" file function and then type RUN. It's like programming in the old turbo-basic/MS QuickBasic environments. Here's my latest--Nyan Cat: 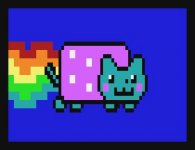