First time writing here. I bought an Olivetti M24 from a local guy. It was sold as a non working unit, but it was from a family who had bought it new in the 80's. The guy told me that it had worked the last time he tried some ten years ago. Since then it had been in storage. It looked very clean and nice when I went to inspect it, so I thought that maybe with a little work I can make it run again. I have salvaged some other computers and have a basic diagnosing and soldering skills. No real education in electronics thou. I got a monochrome monitor and a keyboard with the machine and also manuals and diskettes. All original Olivetti.

Now some months and a massive amount of forum reading and tinkering with the machine I decided it was time to see if I could get some help in troubleshooting this beauty. I now have three M24 motherboards and none working. Let me try to explain. 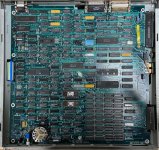 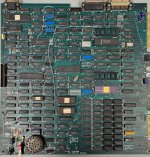 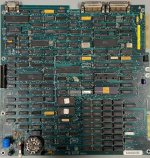 Welcome, MikkoS! This is a very complete write up and some nice pictures.

Hopefully someone else here has some experience with this particular system. I do suspect that all three boards are repairable, based on the pictures that you posted.

Here in the forum somewhere is a complete POST code list made by Trixter from reverse engeneering the M24 BIOS. That should help identifying the problems. Unfortunatelly I wasn't able to find that thread by a quick search.
L

Is this the posting you were looking for? https://www.vcfed.org/forum/forum/g...w-to-read-parallel-port-post-diagnostic-codes

Thank you for replying! Yes, I have read that thread and the info there really helps to understand where the problem might be. One thing is for sure, I need to test memory modules on these boards but I'm unsure what is the best way to do that. I ordered a cheap chinese oscilloscope and will try to use that. There are some videos on youtube about checking memory modules using oscilloscope.

The replacement MB went suddenly from bad to maybe dead. Now LPT diag board gives just "00". Original board still gives me "80 C1 C2 C3" which is kinda odd. Maybe I just assume that it's "00 41 42 43". So then it hangs on the DMA channel test. Maybe I will replace the DMA chip and see what happens. I'll have to order first some sockets.
M

While I was waiting for the oscilloscope and sockets to come from China I decided once more to fiddle with the original motherboard. I had already tried to piggybank memory chips on that MB (all of them at once) but this time I decided to do it again one by one. Whart the heck! Changes were slim for anything to happen, but lo and behold the paraller diag board went all the way to C5:
"80 C1 C2 C3 C4 C5"

My heart almost stopped! The monitor was still black as a coal but when I adjusted it (with trembling hands) this picture emerged: 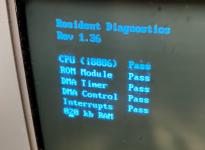 I can't believe my good luck! Maybe I should continue my piggybanking testing
M

Ok, I now have a fully functional M24 with BIOS v1.42 and a full 640KB of RAM. A few notes here, maybe someone will find them useful in the future:
I would like to thank all the users who wrote to earlier threads (and this one) about diagnosing Olivetti M24 / AT&T 6300. Reading those threads really gave me hope that I would someday see my own system working. I feel damn lucky that the day came so soon!
You must log in or register to reply here.
Share:
Facebook Twitter Reddit Pinterest Tumblr WhatsApp Email Share Link
Top