any one have any info on this card not sure what it is. it was in a heathkit i know its made by dg but i have never seen one before all it says on it is game/rtc and some part numbers 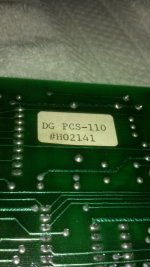 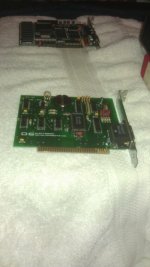 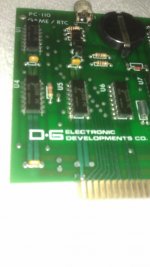 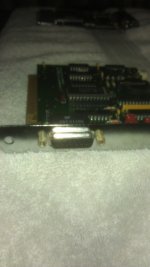 I agree. Look at the 4 resistors and 4 capacitors just above the 15-pin connector; that makes it quite obvious.
M

I don't remember what his name was, but I think DG were the initials of a guy that worked in the Pomona Heathkit Store in the late 1970s and into the early 1980s. He was the computer tech, and he established a small computer business that produced a few computer accessory boards, and I think some software. I don't remember what he was selling, but I remember that he had some big plans. He worked in the Pomona Heathkit Store with my older brother, before I started working in the LA store, and I think he left there before I left the LA Heathkit store.

I remember that there was a big todo/stink when Zenith Data System Corporate (Chicago) came into the picture and tried to make all the employees sign a document agreeing that everything we invented, thought of, or developed while employed by the company, whether during company hours or on our own time was the property of Heathkit and Zenith. They threatened to fire everybody who didn't sign. Most people signed in fear of the jobs. DG was one of the first people who refused to sign, thinking that Zenith was going to take ownership of his inventions and wrestle for control of his company. Some of the rest of us refused to sign, and when the deadline posted by the company for us to sign or else, past, nothing happened.
You must log in or register to reply here.
Share:
Facebook Twitter Reddit Pinterest Tumblr WhatsApp Email Share Link
Top