Hi, I have a pizza box style of Laser 486 SX/3 (see Picture) and I am trying to find a picture of the power supply, specifically the capacitors. Stupidly I didn't take a before photo when changing them and the only marking is a small black "dot" on the PCB for the electrolytics. I originally thought that was the NEG side of the caps, but following some of the traces around, it does not appear to be. Especially since the mains filter cap negative would go to the positive of the rectifier (and yes, I powered it up, and while nothing exploded, thank goodness, it blows fuses). I did check everything I could but as mentioned it does appear that the dot is actually the positive side of the cap. Anyone who might be able to take a picture or two I would appreciate it (apparently the power supply is made by someone different than the motherboard). 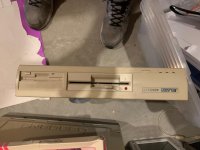 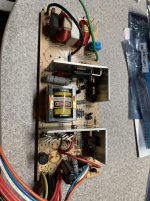