Some friends and I have been working on a Whitechapel Computer Works MG-1. We've replaced the RIFAs, removed the NiCds, and neutralised associated corrosion, and last weekend we powered it on for the first time. It passes the power-on test, which is very encouraging! The display looks crisp, if dim. With time it might brighten up, as I've observed other mono monitors to do (more on that later).

While the hard drives found in our machine have suffered bit-rot beyond simple recovery, we have most of what we need to attempt to boot off of some disk images that we've collected from MG-1s in Jim Austin's "Computer Sheds" collection in York. We'll be setting up a Gesswein MFM emulator in place of the two Rodime RO-202E drives that the machine used to hold.

Unfortunately, one thing we don't have is the classic dome-shaped gray Depraz D/83 P mouse (image from one of the York machines). We understand that it may be possible to adapt a three-button bus mouse to its DE-9 connector, but we don't have one of those, either. We're hoping instead that we might be able to adapt an Apple pre-ADB DE-9 mouse, which also expresses (what we hope to be) a similar quadradture encoding on four of its pins. We will have to improvise two extra buttons, but we expect this will be straightforward.

So, to that end: does anyone happen to know the pinout of grey Depraz mice? I specify "grey" because of this classiccmp post, which claims that the red ones (as used on e.g. Blit) are different.


Question 2. We have been trying to understand the MG-1's power supply. Our York visit suggests that WCW may have sourced PSUs from different manufacturers; ours was built by a vendor called Automation Power Systems (or similar) of Sussex. For purposes we've been unable to ascertain, the 12v and 24v rails both sport fairly large power resistors in parallel to the terminals. These get quite hot (170 °C in still air), and Ohm's Law would seem to require this to be their nominal behaviour! That is, the rated (and measured!) resistance and voltage drop across the resistors mean a certain amount of current, which means a certain amount of power, which means that while some Amiga owners may have had a Video Toaster, many Whitechapel owners simply had a Toaster.

(This explains why we haven't investigated if our monitor will "warm up"---we don't dare leave the computer on for more than 30 seconds.)

My question is: really? The resistors are near a fan when the PSU is inside the case, but even with the fan on, the resistors are still comfortably above boiling. Did anyone here ever use an MG-1 back in the day? Did they notice a hot spot near the middle of the case, towards the back? That special "hot electronics" aroma? We are... puzzled.


Well, thanks for any insight on either of these things...
S

We were able to reverse-engineer the pinout of the MG-1's mouse port and worked out a simple way to adapt an Apple pre-ADB mouse to drive it: 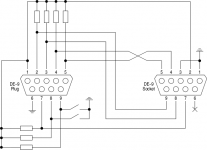 Each data line has a 10kohm pull-up resistor on it. The schematic includes two additional switches (pushbuttons) to make up for the fact that the Apple mouse has only one button.

For the convenience of anyone else who's trying to work with a grey Depraz mouse (or at least a mouse that was once used with a Whitechapel MG-1), the pinout of the mouse's DE-9 connector is:

Somehow missed this first time around......

I have three Depraz mice : 2 red and a grey one.
On the outside one red mouse is labeled ¨Depraz mouse D83/P¨, the other red is labeled ¨DIGIMOUSE type 1000P¨.
They have the same pinout. Inside they both have the identical PCB, labeled D83/P......

The grey one is als labeled on the outside as a ¨Depraz mouse D83/P¨, but has a different pinout and a different PCB inside ( but has the same circuitry !)
The red mice have a hard-rubber ball, the grey one has a (real...) steel ball.

The grey mouse came with my Lilith system, the others came without their accompanying system.
Build quality went somewhat down in time ( cheaper potentiometers )