I have a 286 laptop which I use for testing 16 bit assembly programs on actual vintage hardware.

I would rather use the 286 laptop for everything (writing and compiling) without relying on my modern laptop and dosbox, because the 286 has a much better keyboard and a built in number pad. However, it has a horrible display. The ghosting on it is so awful, that I lose the cursor constantly while editing asm files.

Tried to capture a pic of the LCD ghosting while scrolling text. 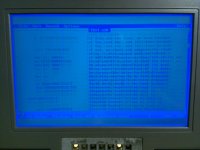 So, i've been looking into external monitors for it. It has a 9 pin display connector, compatible with an mga, or cga monitor which would be just fine if they weren't so stupidly expensive.
I can't find a decent CGA monitor on eBay for less than 200 bucks! I wouldn't pay more than 50.

It also has a 16 bit, and an 8 bit isa slot, but I have no idea if any old isa vga card would work in a system this old. I remember seeing crappy Trident isa vga cards in systems from the Pentium III era.

Pic of the 9 pin mga/cga display port as well as the ISA slot. 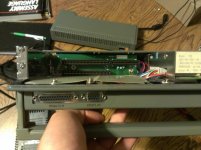 So 8 bit vga cards are too expensive for me. However, the 16 bit cards are still cheap, guess they aren't very rare yet. But will any old card "just work" in my system?

I have a Western Digital 16 bit VGA card in a 286 desktop, shouldn't be an issue. But in your case I wonder if the on-board video can be disabled of if there will be a conflict.
S

I see a 16bit slot on your computer you can use any VGA ISA card there.

Also if you like modding can perform the same mod i did, remove the b/w blurry screen and install a new vga one If theres free space inside the case to fit the controller board is quite easy mod.
C

soviet9922 said:
If theres free space inside the case to fit the controller board is quite easy mod.
Click to expand...