VintageVic said:
The drive will not boot, if all of your 6522's are defective. There must be some life in some of those chips,
because your drive does boot up.
Click to expand...

Yes, both drives boot, both show the exact same issue, the head attempts to move but there's just a faint vibration & sound rather than the head actually moving.

I've tried every combination of the 6522's in a both drives and get the same result - which is why I think I've fried UC1 in my original working drive, and that this just happens to be the issue that the non working drive arrived with (I know I didn't misalign any connectors on that drive).

Thanks for the support though, it's much appreciated.

Incidentally, I swapped out the 9602 and that made no difference either.
V

Wait... misalign the connectors... they can also be accidentally plugged in backwards. Just a thought.
B

Well, I'm a sucker for punishment, I just bought a 3rd 'untested' drive, this one looks to be either DolphinDos or SpeedDos equipped as it has a parallel cable & on/off switch at the rear.

I may be posting more repair question soon :D
B

VintageVic said:
Wait... misalign the connectors... they can also be accidentally plugged in backwards. Just a thought.
Click to expand...

If only it would be that easy - unfortunately they are all in the correct orientation. Good suggestion though.
V

BennehBoy said:
If only it would be that easy - unfortunately they are all in the correct orientation. Good suggestion though.
Click to expand...

Happened to me once... and then I was banging my head against the wall wondering what the heck, the drive was just working.
You're also sure you are using known good mechanics?

I've read my statistics further. There was one case that behaved very similarly. Booted ok, attempt to load moved the head
ever so slightly (not much), red led flickered quicly and load attempt ended up in ?file not found error.

Cause was dirty r/w head. After cleaning the drive it worked fine. You cannot visually see the dirt, when it is there. Also
the floppies might be dirty, but both are able to be cleaned.

Also, check your head has not moved too far from the tracks. When the drive is powered off, push the head somewhere
in the middle of its range with your finger - gently. These older ROM drives the head may get lost out of the tracks and
then the drive is confused and won't work. In the newer C model drives this 'defect' or quality was corrected and the
head is banging "ra ta ta ta" every time during boot moving the head in the working area. .
B

The mechanics on my working drive was just fine before I started doing the testing by substitution. Heads have both been cleaned thoroughly with IPA, and not just the white part of the head but all around it to remove any magnetic particulate. I also have moved the heads to a few different start positions.

Could this be Q8-Q11 failures? I'll desolder them and test later.
B

BennehBoy said:
Back to Ray's guide...

You are following my footsteps here. I have done this a couple of times, when the symptoms pointed to this direction.
In both cases this did not help, unfortunately. Of all the drives I've fixed, these were never the cause.

I've learned that I have had to double and tripple check my own work, because myself caused issues to be fixed. One
tends to be blind to own mistakes. Well, at least that applies to me.

Also, do not trust the fact that you have cleaned the heads of the drives. If your floppies are very dirty, the clean
drive head can become so dirty in 5 minutes of dirty floppy use that it can no longer read discs before it is cleaned again.
B

I agree, I may well have introduced an issue. So far I've retested all of the replaced logic chips, I'll spend some time with the schematics next and continuity check/scope out all the traces to the IC pins.

I've not done _any_ repair work on my original drive (which worked very well), I did misalign P7 & P6 - I'm not sure if that would be fatal to any of the IC's or the drive mechanism but it seems very coincidental that both drives now exhibit the same behaviour with previously known good disks (I've tested many disks).

Any idea if the mechanisms are resilient to being misconnected, or what components may be likely to have failed on their controlling circuitry? They're both Alps drives, and all the motor & head resistances are good.
V

Alps mechanism is pretty rugged. Once I connected several of the cables "backwards" by mistake,
did several boot ups and the drive was on for some time. I would not recommend to try this, but in my case
the drive worked just fine after connecting the cables correctly.

I would also try to clean your head second time (I know you cleaned it already) and clean at least one or two floppies as well,
since dirty discs have at least in one occasion resulted in same symptoms. I have used just water, dishwash liquid and cotton sticks
to clean them out. to clean discs I just use this method:
https://youtu.be/01n8RgHgIwg?t=64

As you can see, dirty disc can contaminate the cleaning cotton stick to very dirty! But, perhaps you have already cleaned the floppy you use?
B

I honestly think the problem lies elsewhere, I have re-cleaned the heads for every disk tried, and some of those were disks that I recently also cleaned (and that worked prior to me 'breaking' my working drive).
B

It has a DIY SpeedDos adapter fitted - very poorly made. I've removed it for the moment, UC3 at the very least is dead - no serial connectivity with it installed.
V

You could try to restore it into original state. Put UB4 rom from your other drives to it, also try out your other 6522 chips
at UC3 (and make sure no corrosion on the IC-socket as always).

Yup, I got it communicating over serial by swapping one of the other 6522's in. The motor and stepper respond to commands, but ultimately I get a file not found error - I'll check the read/write head resistances later.
B 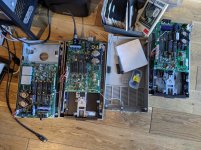 BennehBoy said:
Yup, I got it communicating over serial by swapping one of the other 6522's in. The motor and stepper respond to commands, but ultimately I get a file not found error - I'll check the read/write head resistances later.
Click to expand...

I know you are tired of hearing this, but dirty head/disc is common to cause file not found error . But as you have read Carlsens advices,
you know there are other causes for this as well.

I checked my statistics, UC2 is still a suspect for this. Failed chip or bad contact to IC-socket could be cause.

Mechanics could be the issue. Along with dirty r/w head, check if the head is sticky. It needs to be very 'loose', sticky head is one cause for this.
Misalignment is another cause, but not likely, if the drive has not been tampered with by previous owners. Another is the disc spinning speed.
It needs to be very close to 300rpm and can vary. Someone may have adjusted the disc speed screw. The disc may be slipping for some reason
and the spinning speed could be affected. It would be beneficial for mechanics diagnosis if you had disc tool software and ability to load it
into you c64 to check these possible issues with the mechanics. If the spinning speed is too far from optimal, result will be file not found error.
B

The socket for UC3 was pretty poor, sometimes the serial would not work, but a little pressure and things would come to life, I've replaced it with a new socket and that issue is now gone. I thin I'll do the same for UC2 also.

I have the 1541 diag cartridge, when I tried it before the drive speed is not reported at all - I'll retry and report back once UC2 socket is replaced.

I think the heads are also a bit hard to move so will lube the rails up - any recommendations on what to use?
B

Should stepper motor resistance checks be definitive for motor functionality? The latest drive's mechanism steps no problem, but I still get 'file not found' issues - I suspect I have 6x partially working VIA's and have ordered 6 brand new items from Mouser. When I try my original mechanism (which was working prior to me misaligning the connector) on this new drive, the stepper does not move at all, but the resistances are all as per spec (64ohms end to end, 32 ohms to center tap). I've cleaned and lubed the rails and can very easily move the head back and forth.
You must log in or register to reply here.
Share:
Facebook Twitter Reddit Pinterest Tumblr WhatsApp Email Share Link
Top