Further de-tangling the mess of four laptop manufacturers from the mid 1990's with ties to NEC, Samsung, AT&T, and NCR - we are now divulging into the Samsung built machines.

The Samsung Notemaster was a series of laptops manufactured from about 1991-1994 by Samsung electronics, best known today for UHD TV's and Smartphones, and of course - still today, laptops. In 1994 Samsung changed the name from "Notemaster" to "Sens" - meaning Samsung Electronic Notebook System. The difference was the Notemaster was 486 SX and 486 SL based, while the SENS 700/800 models were based on a 486 DX2 SL, 486 DX4, or Pentium processor. 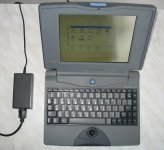 The Notemaster 486P and AT&T Safari 3151 were introduced in 1994 as a entry-mid level 486 notebook computer. For the time they are of a very sleek design. The Samsung/AT&T parallels started with NCR years before with the NCR Safari 3150 and earlier models which were based on earlier versions of the Notemaster. They generally rated, per PC Mag, as a mid-tier machine, not performing at incredible benchmarks like the IBM ThinkPad, Compaq SLT, and NEC Versas of the time, but being a pretty good value considering you could get an Active Matrix screen, and it had a pretty decent keyboard. Battery life was nothing to write home about at 1.5 Hours roughly - which I can attest to as I owned a AT&T Safari 3151 with working battery back in the 2000's (see my "Alabama Years" gallery for that computer). 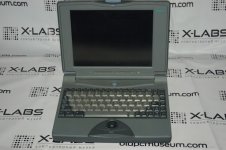 The Samsung Sens 700/800 were a later marketed version of the 486 line easing into the Pentium line before a full redesign in 1996. It also appears they may have had an AT&T rebranded version - possibly still as variants of the Globalyst 200 - but this is not entirely clear from my research. It's been also hard to find out what sound chipset these have but "Full Business Audio" sounds very likely that these had a Crystal Semiconductor CS-4231-XX series WSS Compatible chipset. Whether this has OPL support or not is not clear either. The Sens line has continued to be around since that period in time. 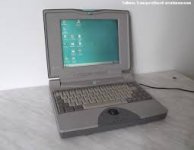 ​
The NCR/AT&T Versions of these machines, such as the Globalyst 200 shown above, share the same distinctions as the difference between NCR/AT&T machines built by NEC - the power button, keyboard Function key-combo highlights, lid latch, and other accents, are all a bright foam green color, and the keyboard bezel, and screen bezel are a brighter gray color. Otherwise, their specs are pretty indicative of what model of Samsung Notemaster/Sens they are rebadged as.

A BIT ABOUT THE BRANDS/MIX & SOME SPECULATIONS

It is also possible that NEC and Samsung were possibly using NCR as a secondary factory for their models as well. NCR has made standard computer equipment before and it may have been to increase production, and possibly lower prices, Samsung kept their plants in China going, and NEC theirs in Japan, and then outsourced some builds to external factories late in their respective products lifecycles. This is all speculation though.

In present day, these machines don't get a whole lot of notice but seem to be going for around $100-150 BIN, though offers are likely lower and "sold" listings don't reflect the actual sold price from an offer. Most people are very unaware Samsung was a thing prior to 2000, including the original Wikipedia article on the Sens which lists the series as starting in 2000, not 1994. I would mostly value them in the $75 or below bracket depending on specs. It seems the most common problem - for the Globalyst 200/Safari 3151, is the screen stops coming up on boot after some time. It could be just a cable issue or it could be something the LCD panels these use are prone to. On a flip-side from their AT&T/NCR NEC-built stablemates, the keyboards on these are among the best, on ThinkPad level, but the trackball is a little stiff and the buttons offer little-to-no feedback compared to the NEC Versa VersaTrack trackballs found on later AT&T and NCR models. Performance is more than adequate for most stuff circa 1990-1996, and they do take to upgraded drives fairly well. Another good-runner in the world of lesser-known vintage laptops in the 486/early Pentium class.