I ran into what appears to be a fairly common problem with the Texas Peripherals internal floppies in my Model III, which is that the bracket cracked that holds the little pins that keep the front door latch connected to the internal arm that clamps the disk. The white plastic pins would no longer stay put. Another post suggested epoxy, JB Weld, wire wrapping, etc., as a means of fixing it. I made a few too many attempts with the epoxy before arriving at the conclusion that it was never going to hold.

In the end I simply used Fusion 360 and a micrometer to model the original part and then 3D printed a replacement. This turns out to be a perfectly fine solution and appears to perform as well as the original part. If anybody else is in need of the model files for printing, or just needs a replacement or two printed and mailed directly, just PM me.

I don’t know if this piece of the door mechanism was identical in the other drives from Tandon or Shugart that Tandy sold, but I’d be happy to try to model other parts if there were differences and someone can supply an original, or detailed measurements with a calipers as needed.
D

And thanks! We need more of these parts released.

I've made a substitute bracket for the TM100 pins from sheet brass and used a single long pin instead of the short 2 pins. Works very well.
T

Can we see pictures?
A

Here's a pic shot from below the floppy door where you can see the 3d printed part (printed in two halves and welded in the middle with acrylic cement, where there's no stress in operation, to avoid having to print overhangs). Original white pins are still used. The replacement part has closed holes for those pins rather than an open "claw" that is subject to widening over time as in the original design. I'll post to Thingiverse shortly. 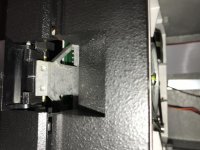 For better viewing, here's the part in Fusion360: 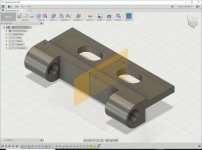 twistedpneumatic said:
Can we see pictures?
Click to expand...

Yup! Without pictures, it didn't happen.
A

For my brass workup or the OP 3D printing?
T

The thing I always find broke is the darn posts that hold the circuit board on.