so, I plugged it in and turned it on and it didn't work, so I took it apart, and this is the situation.

up by the keyboard port there was a place for one of those infamous batteries that usually end up leaking everywhere, but it wasn't there, and there was no corrosion, so someone was on top of that. but there was corrosion away from that point, since it appears that someone installed another battery somewhere else, pics soon. that corroded a corner of the motherboard. I cleaned that up, no problem.

the problem is this: the socket 3. I may have toasted the cpu and or the motherboard. rant time D:<. WHO makes a socket that you can install the cpu in all 4 orientations?! I'm kinda pissed because I think that I may have toasted my cpu or motherboard by putting it in the wrong way. there is 2 pins on the cpu that are blackened and a pin on the socket that is blackened.

I'm sick at my self and sick at the developers for this s**t! D:< I was looking forward to playing some doom or something on this, but I guess not.

anyone have any insight on what may have happened here? and if anything is salvageable? I'll have pics in a minute.
T

you see, that one pin that was toasted and that one hole that was blackened, and I don't know why, but that blackened pin is now slightly bent.

it was giving me a beep code without a video card and garbage with a video card before I accidently rotated the cpu and roasted it, and I don't know how the cpu is supposed to be inserted, so its staying out untill I can figure that out.

Any bets that this computer is done? 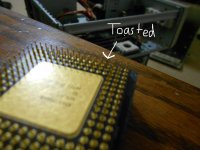 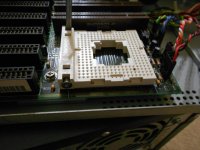 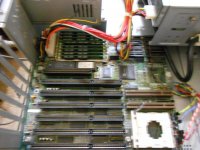 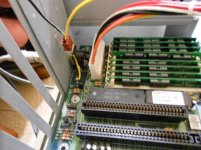 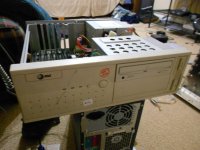 man oh man, I'm gonna be pissed at myself for the rest of the next week :'(

Looking at the socket and possible rotations, it's entirely possible that you simply connected Vss to Vdd (or vice-versa), which probably wouldn't bother the support chips, and, assuming that the power supply lines are still okay (use a meter on the appropriate pins without a CPU inserted to check), you may have only toasted the CPU at worst.

Or, you may not have harmed anything--try the CPU for the heck of it; if i doesn't work, try another. Will your board accept a standard 486DX? I'd rather have that than the crippled 486SX at any rate.

Yeah, Socket 3 mistakes suck, but you may not be beyond redemption.

I suspect that it would be easy to avoid this happening again by clipping pin J1 (which is a no-connect) on the CPU and plugging the corresponding socket hole. It'd be impossible to insert a CPU the wrong way.
T

ok a few things, I don't know what the Vss or Vdd is, and I can't tell which way to put the cpu back in.

Which pin is J1 on the cpu, and thats not used?

so the worst case senario is that only the cpu is toasted? does that mean that the whole system possibly might work still?

also, I don't have a meter that has probes small enough for the socket.

I can't believe how asinine this socket 3 is.
K

pin 1 on the cpu is going to be in the corner of the socket that has the angled holes, not the square holes, make sure the pins line up, then pin one goes into the angles corner.

Tr3vor said:
ok a few things, I don't know what the Vss or Vdd is, and I can't tell which way to put the cpu back in.

Which pin is J1 on the cpu, and thats not used?
Click to expand...

Don't worry about it now--that's for later. Let's get this thing working first.

so the worst case senario is that only the cpu is toasted? does that mean that the whole system possibly might work still?

also, I don't have a meter that has probes small enough for the socket.
Click to expand...

It's entirely possible that you've only killed the CPU--or maybe that may still work.

To reinsert the CPU, you'll notice that the chip package isn't perfectly square--one corner of the package has a slight 45 degree cut to it. Match that 45 degree cut up with the pattern of the pins on the motherboard socket. Just that simple.

Give it a shot and see what happens.

You can extend the pin to check using a plain old straight pin or piece of sold wire.
T

so thats the pin on the very corner of the cpu that is sorta angled and the corner where the pin with the square base is? which corner of the socket does it line up with?
T

the socket in some places has rows of holes that are 4 holes wide, and the cpu has 3 pin wide rows, and there isn't an angled corner, or arrow or anything that I can notice telling me that it where it should line up to.
J 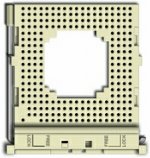 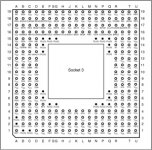 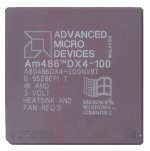 so I put the cpu in the right way, and with and without a video card there is no response. and it appears that the 2 pins that got toasted on the cpu are those Vss and Vcc pins according to that diagram up there, so I'm guessing that the cpu is done for.
T

Chuck(G) said:
Or, you may not have harmed anything--try the CPU for the heck of it; if i doesn't work, try another. Will your board accept a standard 486DX? I'd rather have that than the crippled 486SX at any rate.
Click to expand...

I missed this part lol. It will accept the 486dx, it has a jumper that switches it from the dx and sx. I looked on ebay since I have no other 486 chips (the only kind of cpu laying around is a p4 for obvious reasons), and the prices for one 486sx is more expensive than a dx, so I'm looking into a dx right now. What is a good price to pay for a dx? most of them are like $20

sorta off topic, but I'm already tired of taking out and putting that crazy VLB video card in the computer, its so rediculous! It may be longer than my GeForce 550 Ti.
C

by looking at the jumper settings on the motherboard, it appears to support up to 50mhz cpus. its set at 33mhz, which is the same speed as the cpu that came out of the system.

I'm looking at the dx, because it has the built in FPU. I'll order one for sure next thursday when I get paid. (too long for my ADD wants )
C

I think I'll get a 33mhz DX, its just easier so I don't have to mess with any jumpers or anything like that. If I have to run something thats too slow on that machine, I got my Pentium 133 that would do the job.
T

ooooh, so thats why its the DX2 instead of just a faster DX.
J

Yes it doesnt look the board has a VRM, there are socket adapters for that, but why bother.
Intel DX2/66 should also be 5V by the way - they might even be more easy to find than the DX33.

Here's what I've got, all tested and working: